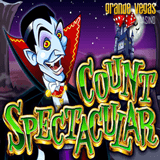 What I really like about tournaments is that you can win some nice prize money without risking a lot of your own money. And in the case of a freeroll you risk nothing!

Count Spectacular is a 25 payline slot game with bets ranging from a penny up to a dollar per line. An animated Count personally welcomes players to his castle of horrors. An expanding wild symbol, when he appears on a reel he then covers all lines for that reel. When he appears on the first and fifth reels he activates the bonus round. Five Count symbols hits the game’s jackpot. It's one of 19 games in Grande Vegas’ popular mobile casino.