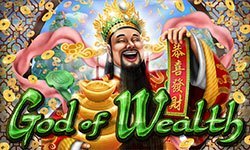 With 2015 about to come to an end, you may be wondering what 2016 will have in store for you. Well, we’ve got great news because Grande Vegas Casino is going to have a new online slot available for you to play very soon, namely, God of Wealth. This Realtime Gaming release will have a number of fantastic features including a bonus round, free spins, a randomly triggered progressive jackpot and much, much more. With 25 paylines spread over five reels, you’ll have a great time trying to get the symbols to line up in this beautifully designed and well-thought out online slot.

With a Chinese theme, the game is one of many that RTG has released that is all about Asia, but this one is a little different in terms of its beautiful illustration style and its excellent functionality. When you play God of Wealth, you’ll notice that not only are the symbols such as the tiger, dragon and ox sharp with clean lines, but the animation of the reels is quite impressive too. Of course, as this is a modern game, this is par for the course for the developer. Two important symbols you’ll see on the variable paylines are the God of Wealth, which is the wild and the gold ingot which serves as the scatter. The latter is especially important as it provides the link to free games.

Of course, an RTG game wouldn’t be an RTG game if it didn’t have the potential for you to win loads of cash and this game certainly does give you that chance. You have the opportunity to hit on the top fixed jackpot which is set at 10 000 coins or if you spin the reels enough times, you may be the one lucky player who hits the big time on the progressive jackpot. Of course, even if you don’t strike it lucky immediately, you will still have a lot of fun, especially if you find three of the scatter symbols and manage to unlock the bonus round.

The bonus round works in a very simple way, that is, you’ll get up to 10 spins for free and anytime the God of Wealth symbol appears during those free spins, he’ll work his magic on the dragon, tiger or ox and turn them into more wilds. That means your potential to win big bucks is sky high as more wilds could equal more cash.

The game is set to be released in early 2016 and promises to be one that becomes a fast favourite with players from around the world. This may be because it is visually appealing or because it has impressive jackpots waiting to be won, but the chances are that it will also be popular because it will be available on the mobile casino, instant play and downloadable casino, which means you’ll have your choice of methods to access it.

Be sure to keep an eye out for God of Wealth, coming soon with loads of cash to be won.