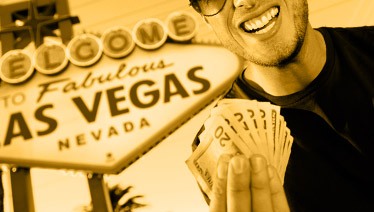 When people have more pay, they play. That's an old observation about the state of the economy that's as true today as when it was first spoken. Probably the most effective observation point for the American economy is Las Vegas where people take their leisure funds to spend on relaxing accommodations, sightseeing excursions, Vegas casino gambling action and theatre entertainment.

Observers watch the Las Vegas scene closely to get a sense of the state of the American economy. Some recent observations are discussed here.

A ten month visitation drought, in which visits (via air travel) to Las Vegas dropped from last year's high, just ended. The Southern Nevada economy depends on the visitation rate and when travel to Vegas drops, so do the numbers of players at the area's casinos.

The stakes are greater when speaking about plane travelers because those are the visitors who take rooms at the casino. Room taxes in Clark County were raised recently to help pay for the $1.4 billion expansion and renovation of the Las Vegas Convention Center and the $1.8 billion Las Vegas stadium.

So on many levels, an increase in travel to Las Vegas demonstrates a healthy Vegas economy and a healthy American economy. This spring, after 10 months of downturn, the numbers turned up again and that's a good sign for everyone.

Although the decrease can be dated from July 2017, some officials, including Las Vegas Convention and Visitors Authority CEO Rossi Ralenkotter are blaming the 10-month tourism slump on the Las Vegas shooting that took place on October 1st. That could account for Vegas's inability to get going again after the summer dip.

Obviously no one really knows why tourism declined and then rebounded but its turn-around is a good sign all around.

The Las Vegas economy is relying more and more on trade show traffic. That sector is growing with more hotel rooms available, increased investments in new convention space and more availability of properties where the shows can take place.

He expects $1.3 billion of hotel construction investments in 2018 and $12.4 billion between 2019 and 2023. John Restrepo, Principal of Las Vegas-based RCG Economics and a leading Vegas financial and economic consultant, said he predicts investments made in 2018 will go toward four new properties with 572,000 square feet of new convention space plus 1,194 new rooms. He predicts that between 2019 to 2023, construction will produce 1.2 million square feet of new convention space, nine new properties and 7,260 new rooms.

That exceeds last year's $429 million investment which produced three new properties totaling 151,199 square feet of new convention space. Compared to a 10 year high of 15 percent between the 3rd quarters of 2010 and 2013, the third quarter of 2017 saw the vacancy rate for industrial property shrink to a satisfying 5.5 percent.

According to Restrepo, wage stagnation is playing a part in a reluctance to buy new homes on the part of locals who have gotten used to renting apartments. The third quarter 2017 vacancy rate for Las Vegas area apartments was 7.5 percent, compared to 10.5 percent 7 years ago.

According to Restrepo, job increases in sectors like education and business services show the local economy is diversifying so it's not as reliant on the casinos as it was once. Many observers have said that they hope that the new Trump tax bill will lead to higher wages which will, in turn, bring increased spending and more diversification in the Vegas economy.

Vegas wages still lag, with inflation-adjusted average weekly earnings hovering at $669 in November 2017 versus over $700 in November 2008. Restrepo feels that the stagnation is linked to the casinos' preference to work with contractors, rather than hire full-time workers, as well as the continued use of recession-sized staffs as opposed to a boom economy-full sized work force.

Employees haven't yet seen the benefits of the tax bill though recent contract negotiations with the unions, which brought about a significant wage increase, give workers and observers cause for optimism.

Details of the negotiations, which so far have brought agreements with MGM, Caesars and approximately 20 smaller casinos, have not been publicized. However, it's believed that workers will be able to look forward to an approximate $1 per hour increase in wages