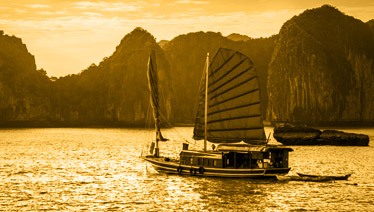 Hard Rock is working with the Banyan Tree Holdings to develop a $2 billion casino along Vietnam's eastern seaboard. The Cu Du Village site will operate with deposit and no deposit gaming options so that each visitor can play in a way that meets his or her individual gaming level and betting level.

Rumors of the casino project have been floating around since the beginning of the year. Plans call for Hard Rock to contribute approximately $100 million to cover costs for the gaming and entertainment sections of the complex which also includes residential hill villas built at Cu Du Village.

In Phase I of the development, the project will see a 57-villa Banyan Tree resort built along with luxury residences, a golf course, ten eateries, two spas, bars and a conference center. In Phase II more luxury accommodations will be built along with a possible additional gaming facility.

Vietnam's government deliberated for months before giving Banyan Tree the license. Vietnam hasn't awarded any new casino licenses in over a decade. The Banyan Tree resort has the potential to significantly boost the gambling tourist economy in Vietnam which, at the moment, is dominated by the Grand Ho Tram Strip.

Nguyen Van Cao, chairman of the Provincial People's Committee, presented the license to Ho Kwon Ping at the Vietnam-Singapore Business Forum 2018 which was held in Singapore. Kwon Ping is chariman of the Laguna Lang's managing partner

Ho said “many hotel investors and development funds have been awaiting the casino license and the selection of a casino operator before finalizing their investment into our Phase 2.” Laguna Lang resort opened its $285m first phase five years ago.

Banyan Tree expects to launch the new casino resort by 2022. It's expected that Hard Rock will operate the casino, using its experience and expertise to create a gambling mecca in the Far East.

The casino project will be accompanied by a major infrastructure upgrade which will include high-scale development of electrical systems, transportation, environmental management systems and water supplies. The developers want to ensure that the resort will be prepared to handing the expected influx of visitors but they also wanted to entice the government of Vietnam which was impressed by these plans.

The traditional nation of Vietnam is modernizing and, as part of that movement, has decided to open its borders to casino entertainment in the form of casino resorts that will attract tourists. The country has also recently begun to experiment with allowing local residents to gamble in casinos. While the experiment, which began in December 2017, will end before the new Banyan Tree project is ready to open, it includes options for Vietnamese to play at the Ho Tram venue and the country's smaller gambling halls (generally located in upscale hotels).

These sites have, till now, been off-limits to local Vietnamese citizens. However, the government said that it's open to relaxing the rules temporarily to gauge the impact on society. The announcement had been anticipated for years. It came last March in Circular 102/2017/TT-BTC that was issued by the Vietnamese Finance Ministry.

For years the government had promised to launch a pilot program to relax the long-standing prohibition on local citizens gambling in casinos. According to the Circular, Vietnamese gamblers must demonstrate a monthly income of at least VND 10m (US$440) in order to enter gambling halls for the purpose of playing the casino games.

Entry fees are to be set at VND 1m, with monthly passes available for VND 25m (approximately $1100).  When a local Vietnamese citizen enters a casino the operator will issue an electronic card on the person or open a book to track the person's activities. This card or other tracking device will follow the person's movements for five years to monitor his/her casino activities.

The Circular doesn't specify the casinos in which locals can gamble but earlier government communiques indicated that they would be allowed to play casino games at the casinos on the Phu Quoc island or in the Quang Ninh province.

The plan authorizes an additional five-year trial for betting on international horse racing matches, greyhound races and  football matches. It's not yet clear as to who will be allowed to bet on sports events but the government has announced that bets will be limited to VND 1m in total daily wagers.

The Vietnamese government has, of now, not made any provisions for online betting which could limit patronage of state-approved betting operators.

Under the communist government gambling in Vietnam was completely illegal but in recent years there has been more of a move towards relaxing the rules. There is still a strong central governmental presence in the gambling industry which tolerates some forms of gambling but not all.

Illegal operators do run a wide range of underground gambling and sports betting businesses around the country. These include online betting that is facilitated through VPN networks.

In addition to the new trial periods there are two legal gambling options in Vietnam: