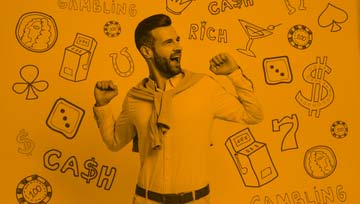 If you're a casual poker player, you don't need to read any further.  However, if you find yourself getting caught up in the game and sometimes feel a little obsessive about your hobby, it's time to sit back and catch your breath.

Both land-based and online Vegas casino poker can be overwhelming. The combination of luck and skill can lead even the most level-headed player to try to stay in the game long after the time has come to quit. Amateurs and pros alike become obsessed with creating the perfect hand while matching their betting to that aim.  No matter what kind of hand they build, there's always one more, a little better, waiting to appear.

Experiencing the ultimate success when playing poker isn't based only on the player's talent or commitment. Some of the most driven poker players in the world are highly talented and extremely committed.  But often, they burn out because they are too committed. They overwork themselves and after a few years, feel fried.

Even taking breaks isn't enough.  So how do you get the most out of your poker game? The poker players who do well year after year follow a formula.  Try these five steps to stay in the game.

If you overdo anything, you won't enjoy it. That's as true with poker as with anything else. Poker is a game, true enough. But no one can do anything for long periods of time without pacing themselves. That's one thing that poker players, especially many pros, don't realize.

They think "here's something easy that I can do for years and years without over-exerting myself while I make good money." What they don't realize is that, in poker as with anything else, you simply won't perform well if you lose your enthusiasm for the activity. Play poker day after day, week after week and month after month and there's no way that you won't lose your enthusiasm for the game.

If you pace yourself, you can keep playing even as you collect your pension payments. You can pace yourself and still work hard but by planning out your events you'll work smarter.  And that's the key.

It's not the hours you put in, it's what you put in the hours. For instance, spend your practice sessions working on the things that need attention. Practice in short sessions. Practice with people who you enjoy being around. You'll get as much out of those enjoyable activities as you would if you were putting in 12 hour days.

The image that many people have in their minds of a group of pot-bellied poker players sitting around a table with drinks and cigars was probably not accurate 100 years ago but it's definitely not accurate today.  Players know that, in order to keep on top of their game, they need to be alert and healthy.  That means no smoking or drinking during the game and lots of exercise plus a generally healthy lifestyle at other times as well.

Aside from the obvious disadvantage of pursuing an unhealthy lifestyle, savvy players know that the way that they eat, drink and conduct themselves outside of the poker room will affect their game. Dr. Jon Ratey discusses research that shows how exercise positively changes the brain in his book Spark: The Revolutionary New Science of Exercise and the Brain.

Ratey found that in small school districts where kids work out each morning, some of the highest test scores are produced. "At every level, from the microcellular to the psychological, exercise not only wards off the ill effects of chronic stress, it can also reverse them," says Ratey.

"Studies show that if researchers exercise rats that have been chronically stressed, that activity makes the hippocampus grow back to its pre-shriveled state. The mechanisms by which exercise changes how we think and feel are so much more effective than donuts, medicines, and wine. When you say you feel less stressed out after you go for a swim, or even a fast walk, you are."

The best poker players are aware of this. They limit processed food, grains and sugar and engage in other brain-building activities like sports, hiking, meditation and other types of exercise.  This sharpens their decision-making skills and keeps their stress levels down.

The most successful poker players have interests outside of the game which they pursue, often at the "expense" of practice time.  They read, travel, exercise, do volunteer work and engage in other activities that have nothing to do with poker.

Malcolm Gladwell, the well-known commentator on popular culture, established something known as  the "10,000 hour rule." Gladwell wrote in his book  Rest: Why You Get More Done When You Work Less, that it takes 10,000 of deliberate practice to master a craft.

Alex Soojung-Kim Pang, who specializes in how deliberate rest makes creative careers more productive and sustainable, looked further into Gladwell's assertion and found it to be empirically true.

He noted that most elite performers work in focused four to six hour shifts. It's difficult for them to go beyond so their deliberate practice is primarily concentrated in those hours, though they might  engage in light work after that initial burst.  Additionally, almost all elite performers slept nine hours daily – some sleep in an 8 hour stretch and then nap during the day.

Pang also noted that elite performers have interests outside of their field. His research showed that performers who had trouble discussing their outside interests  performed poorly as time went on. This was true regardless of whether they were athletes, musicians or scientists.

Doing the same thing day in and day out can make you go crazy.  Even poker players need a break in the routine in order to perform well.

When you first start playing poker, it may seem like a puzzle which is a fun way to look at the game. You try to solve the puzzle and make some money at the same time.

After awhile, when you get the initial strategies down, the puzzle part of the game fades and you focus on winning. And that's when it becomes routine – and when the boredom can kill you.  When you're bored you're less focused and you're not as quick to react as you should.

Everyone has their own strategies for reducing boredom and keeping things from becoming boring. Find your strategy and go for it. Succeeding at poker has to be something more than showing up for work every day.  You have to be engaged, challenged and immersed in what you're doing. Then you'll do well.