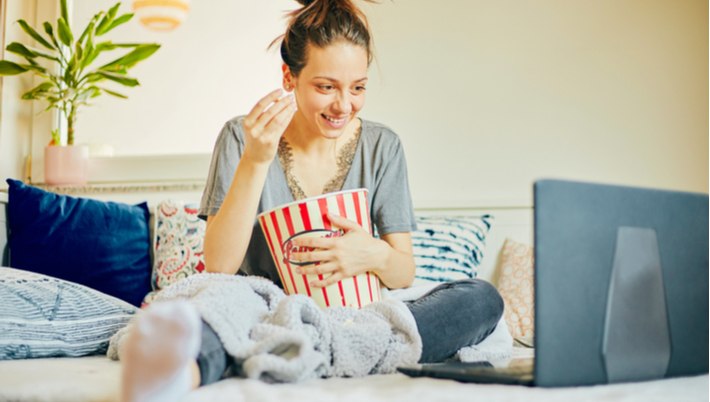 This summer, after months of closure due to the pandemic shutdown, states started to allow their retail casinos to reopen for business. But not everyone is ready to head to the gaming tables yet. Some people continue their gambling adventure at online casinos  but there are other types of gambling entertainment as well. You can indulge your interests in gaming with neighborhood games on Zoom, online casino action and with movies about casinos and bookmaking.

So get your popcorn, sit back and enjoy.

21 is based on the true story of a group of students and ex-students from Boston-area colleges – including MIT and Harvard – who employed sophisticated strategies such as card-counting to beat casinos at blackjack. The team operated between the years 1979 and 2000, employing  their mathematically-engineered “smart gambling” techniques to beat the casinos around the world.

The students realized that when playing blackjack, a skilled player can beat the house. Beyond the basic strategy of when to stand and when to take a hit, a player can use strategies such as card counting, hole carding or shuffle tracking to improve the odds. Basically, if a counter can determine the low and high cards that have been played, and since the cards seen since the last shuffle are now at the bottom of the deck, he will know what the probability is of him getting a high card (generally regarded as desirable) or a low card (generally regarded as undesirable).

The movie follows Ben, a prospective student at the Harvard Medical School, who originally joins the MIT group to get money for his studies. The group travels to Las Vegas where, using their skills of hand signals and code talk, they make hundreds of thousands of dollars at the blackjack tables of the Vegas casinos.  The movie takes many liberties with the facts but gambling buffs will be fascinated by the basic truth of how a group of young card counters walked away with millions from the world’s biggest casinos.

One of Paul Newman’s last, and arguably best, performances was that of “Fast Eddie” Felson in Color of Money in which he portrayed a pool hustler who has retired from the pool circuit (Color of Money is a sequel to the 1961 Hustler  where Newman first played Fast Eddie when he was at the height of his career).

Now retired, Fast Eddie is working as a liquor salesman in Chicago  but he meets young hustler Vincent Lauria and  (Tom Cruise) and become’s Lauria’s mentor. The two hit the road to work the hustle at pool halls around the country.

The hustles come fast and furious as the two work as a team and then as competitors, coming to the final conclusion that luck is an art.

Newman won an Oscar for his role.

If you’re looking for some light-hearted casino viewing fun, check out Let It Ride, a 1989 comedy about a gambling addict who has a history of losing his bets but suddenly can’t seem to lose at anything.  It’s a sweet film with the loveable Richard Dreyfuss (Trotter) as the main character, a cabbie who loves to wager on the ponies.

One day Trotter gets a tip and starts a winning streak that makes him into the day’s biggest winner. Observing his newfound luck are the snobs in the Jockey Club, the losers in the neighborhood bar and other oddball characters.

All turns right during the final race which is tension-filled and fulfilling at the same time.

No list of gambling movies would be complete without mentioning the 2001 Ocean’s Eleven, a remake of the 1960 Ocean’s Eleven which starred Rat Packers Frank Sinatra, Dean Martin, Peter Lawford, Sammy Davis Jr., and Joey Bishop.  The ‘60s movie was a classic but the 2001 Steven Soderbergh remake launched a franchise that has entertained generations of movie-goers and casino aficionados.

The movie plot follows Danny Ocean and a group of his co-horts who head to Vegas to plan a casino heist. Their goal is to rob the Bellagio, the MGM Grand and the Mirage simultaneously. Ocean’s partner is less interested in the money than in getting back at his rival, Terry Benedict, who is the owner of all three casinos.

The plan is set to be executed on the night of a big boxing match when, the planners predict, the casinos will have massive amounts of money on hand as per the Nevada Gaming Commission’s requirement that a casino must have enough cash on hand to cover all wagers.

The group assembles a team including an explosives expert, an electronics and surveillance expert, mechanics, a casino worker, an acrobat and a pickpocket. To explain the plot of the heist would be overwhelming but suffice it to say that all of the various talents combined, plus a lot of psychology in manipulating Benedict, to ensure that the money is safely transferred into the robbers’ hands.

The Sting is, for many, the granddaddy of all gambling movies. The 1973 Oscars certainly thought so as they awarded The Sting The Best Picture Oscar as well as Oscars for Best Director, Best Writing, Best Art Direction/Set Direction, Best Costume Design, Best Film Editing and Best Original Song Score.

Paul Newman and Robert Redford took the leading roles in this film which was set in Depression-Era 1935. Redford plays Johnny Hooker, a small-time grafter who gets on the wrong side of mafia bigwig Doyle Lonnegan. To elude Lonnegan’s clutches while scamming him big-time Hooker teams up with Henry Gondorff (Newman) and the two device a scheme that will solve all the problems plus deliver a big cash reward for their efforts. Gondorff and Hooker must not only deal with Lonnegan but also get the crooked police off their tail but in the end, they pull it off with style.