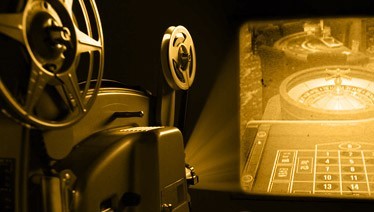 Spend quality time with family and friends over a bucket of popcorn and some mulled wine or cider.  Since the dawn of the film era movies moviemakers have always highlighted gambling entertainment through a variety of themes and genres. Today it's easy to identify the type of movie that you want to watch and, with a few clicks, open the movie at your leisure.

Regardless of whether you're looking for a fun-filled, light-hearted gambling movie or something more serious and compelling you'll be able to find it through simple searches on your Internet search bar.

Some of the best gambling movies of all times include:

The Gambler is one of the most recent – and most successful – movies that feature the challenges and success of a high-stakes gambler. The movie stars Mark Wahlberg, John Goodman and Jessica Lang and tells the story of Jim Bennett, a English professor by day and a high-stakes gambler by night. Bennett goes out on the ultimate limb when he gives his life as collateral for a loan from a Mafioso.

To escape from the mess, Bennett maneuvers his creditor to vie with the operator of a gambling ring. Then, he plays both sides as he gets increasingly more deeply embroiled in the underground world. Bennett is mentored by loan shark Frank but that's not enough to extract him from the mess, causing him to risk everything in order to get a second chance to repair his life.

The Cincinnati Kid brought Edward G. Robinson, Ann-Margaret and Clint Eastwood together in 1965 in a classic tale of pressure, blackmail, romance and high stakes poker. The movie is set in New Orleans of the 1930s and focuses on the Cincinnati Kid, Eric Stoner, an up and coming gambler.

Eric's goal is to challenge card shark Lancy Howard and earn the title of the "Greatest Poker Player."  Once the game has been scheduled the betting odds rise as the 2 players prepare for their match. Side stories include those of Shooter the Dealer, Melba, Shooter's cheating wife, the girlfriend Christian and a plan to blackmail Shooter into rigging the game in the Kid's favor.

Ocean's Eleven was a big hit for Warner Bros. who hit it big with a movie that featured a great storyline and a huge cast of stars. The story centers around Daniel Ocean, an ex-con who has a big plan to hit three Las Vegas Casinos who are owned by villain Terry Benedict. Ocean and his cohorts plan to hit the empire just as scheduled big boxing event will be taking place, placing $150 million dollars in cash in the casino's coffers.

The cast includes George Clooney as Danny and cohorts Bernie Mac, Brad Pitt, Elliott Gould, Casey Affleck, Scott Caan, Eddie Jemison and others, each with his own specialty that will enable the group to grab the cash and make their get-away. There's a pick-pocket, a pyrotechnician, a professional card dealer, the get-away driver, a weapons procurer, a bugging technician, a Chinese acrobat artist and a funder. The eleven collaborators keep viewers glued to their seats in suspense – but the fact that there's another, even more exciting Ocean's 12 sequel should tell you how this ends.

The Sting came out in 1973 and is still viewed by many as the penultimate gambling movie of all time. The movie stars Robert Redford and Paul Newman as a pair of 1930s con artists who invent a plan to rip off a big-time crime boss and get the police off their backs – all at the same time.

The 7-time Oscar winning movie which racked up Oscars for Best Sound, Best Writing Story and Screenplay, Best Art Direction, Best Costume Design, Best Film Editing, Best Actor in a Leading Role and Best Picture, follows Johnny Hooker and Henry Gondorff as they create a scheme that will make them rich at the expense of the crime boss who killed one of their friends. Other con men and con women join in the action that has more plot twists than movie-goers could count.

A Big Hand for the Little Lady

Top 1960s stars got together for this light-hearted comedy that's set in the Old West. The plot follows a young family that's heading towards San Antonio to buy a farm. The father bets all of his money in a poker game and suffers a heart-attack half-way through the game. That's where his wife steps in to recover the funds. Problem is that she doesn't know how to play poker. The movie stars Henry Fonda, Joanne Woodward, Jason Robards and Paul Ford.

Casino Royale introduced Daniel Craig as the latest James Bond as he engages in a battle of the wits with international terrorists. 007 faces Le Chiffre, a banker who funds many of the world's most violent and sadistic terrorists.

The two adversaries meet at a poker game at a Montenegro casino where Le Chiffre is playing in order to win the massive funds needed to keep the terrorist market alive and thriving. Bond enters the game with the objective of preventing Le Chiffre from achieving a win. This movie was a hit with old Bond fans and new secret agent enthusiasts alike.

Paul Newman plays Fast Eddie Felson in this 1961 movie. Fast Eddie challenges the legendary Minnesota Fats to a pool tournament where the stakes are high, both in money and in reputation. Eddie loses against the Fats – both the stakes and his confidence. When Bert Gordon, a ruthless manager, comes onto the scene, Eddie becomes better equipped to beat Fats. The question is, is winning a new competition worth losing his girlfriend and his soul? The ultimate question in this movie is, what will Eddie decide is most important in his life?

Movie fans who enjoy this movie will be pleased to know that Eddie returns in the 1986 Color of Money film where Paul Newman – cast as a much older Eddie – teaches a younger version of himself (Tom Cruise) how to hustle the pool scene. In doing do Eddie is inspired toward his own comeback.

Casino gambling is always fun but if you need a break from the tables and machines, you can fill up on a fun-filled gambling-inspired film.