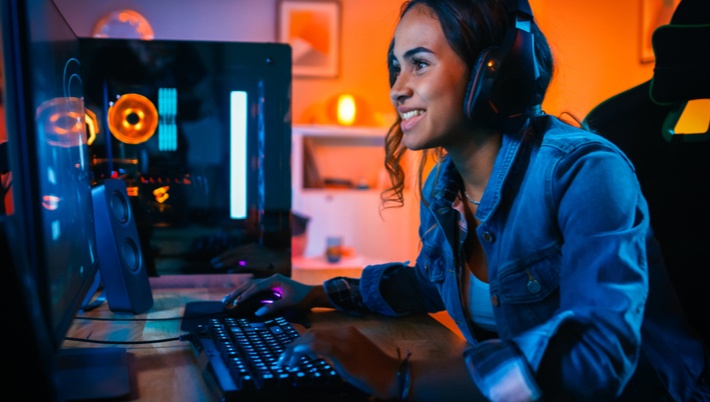 Playing casino sign up bonus games is regarded by many as a frivolous pastime which simply provides diversion, amusement and entertainment. New research, however, shows that playing video and online casino games is an excellent way for people to challenge their cognitive abilities, grow brain cells, treat disorders and change the way that they think.

A growing body of research suggests that playing video games changes regions of the brain responsible for visuospatial skills and attention which guides the brain towards performing more efficiently.

One prime example of this is the game Portal which is a physics-based video game in which the gamer moves through a series of rooms to try to escape from Artificial Intelligence. The hand-held portal device that the player holds facilitates his/her escape as s/he is challenged to “think with portals” and solve each room’s puzzle.

Once a room’s puzzle is solved the player can move on to the next room. The game involves skills in physics, logic, math, problem-solving, probability and spatial reasoning.

You don’t feel like you are boosting your cognitive skills as you play what is basically a fun game but that’s what you’re doing. In fact, a Florida State University study found that the game’s sequel, Portal 2, compares favorably to games that were designed specifically for brain-training as a device to strengthen cognition.

People showed greater improvement on cognitive skill tests after playing Portal 2 than did people who played the Lumosity game – the game that was created specifically to boost cognitive skills.

Why did Portal 2, a game created to be a fun diversionary activity, out-perform Lumosity which was specifically designed to improve cognitive function?  Researchers tell us that the answer lies in the brain’s ability to continuously form new neural connections as it reorganizes itself. This neuroplasticity occurs in gameplay with “axonal sprouting” where the brain’s axons create the new neural pathways needed to accomplish new tasks.

The Lumosity mini-games were designed to train individual cognitive functions. Conversely, Portal 2 gameplay engages multiple cognitive processes at the same time. Therefore, Portal 2 demands that more brain processes be engaged simultaneously so that the player can accomplish the game’s tasks. This leads to the formation of more types of neural pathways that facilitate more complex tasks.

Further studies showed that those who played action games at least 5 hours every week were better at keeping track of multiple objects, were better at multitasking and were more able to identify details.

Researchers are also examining how gaming may become an effective tool in treating different types of disorders.  Psychology Today printed an article that reported success in treating amblyopia with video games. People with amblyopia, in which one eye becomes non-functioning, were asked to play video games using the non-functional eye. The affected eyes recovered either totally or almost totally.

Some studies have found that video gaming combats dyslexia -- 12 hours of game play produced improved reading and phonology  test scores which mirrors results of training programs designed to treat dyslexia. Playing video games has been associated with a reduction in mental decline in elderly subjects. Impulsivity is also treated successfully with the right types of games – individuals who were treated for impulsiveness were asked to refrain from responding to specific stimuli in their games. After a short while, their own impulsive behaviors lessened.

Video gaming is also an effective tool in the war against “fake news.” Researchers at the Harvard Kennedy Shorenstein Center on Media, Politics and Public Policy have ascertained that, in a video game that promotes the undermining of democracy, people learn how to create political division in a game. They then transfer it to real life and can recognize those same methods when they are put into play.

Scientists are reviewing the various studies that examine how video games can shape our behavior and brains. Marc Palaus co-authored Neural Basis of Video Gaming: A Systematic Review  which was published in Frontiers in Human Neuroscience.

Palaus summarized  the results of 116 studies. 100 of the studies focused on changes in brain functionality and/or behavior and the others examined structural changes in the brain.

Two of the summary’s main conclusions were:

Video gaming is still a new field and research into gaming’s effects is still new. Palaus says, "It's likely that video games have both positive (on attention, visual and motor skills) and negative aspects (risk of addiction), and it is essential we embrace this complexity."