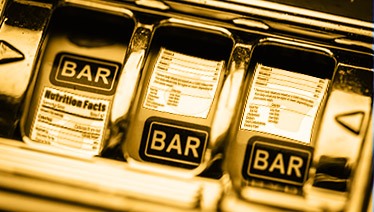 In an effort to help consumers learn more about the addictive components of slots entertainment, the Ontario Gambling Corporation is testing “calorie labels” on its casinos’ online Vegas games slot machines. The experiment, which was designed in an attempt to copy the warning labels that are placed on nutritionally questionable foods, gave the slots gamers basic information about slots odds and its focus on getting players to play more and more.

However, players ignored the labels and continued to play at the previous level.

Two professors at the University of Waterloo (UW) created the slot machine lablels. They hoped that they could educate gamblers on how the machines worked and thereby reduce the prevalence of problem gambling behavior. Professor Kevin Harrigan of the UW Digital Arts Communication Department explained that his mission is to “spread the word about how [slot machines] were designed.”

Harrigan wanted gamers to become more aware of how slots machines use a “near-miss” phenomenon where bars/icons almost line up to form a jackpot but not quite which leads some players to believe that they are more likely to win on a subsequent spin. Hannigan also focused his labels on how machines’ lights and sounds can successfully disguise losing spins as wins.

Harrigan and UW colleague Dan Brown used the ‘Facts Up Front’ nutritional labels as a prototype for their slots labels. The “Facts Up Front” labels are placed on food products in the US where they list the amount of salt, sugar and fat that’s contained in the product. .

On the slots labels, Brown and Harrigan listed the machine’s volatility, odds that a player may hit a bonus round and payback percentage --  whether the game offers small but frequent payouts or whether payouts are few and far between.

The Ontario Lottery and Gaming Corporation (OLG) allowed the professors to install the labels on around 250 slots at the Elora Ontario Grand River Raceway. Hannigan and Brown then surveyed players who had played on the slots machines on which the labels had been affixed.  They wanted to know what the players had learned from the experiment.

According to survey results, players who read the labels felt that they were more educated about the mechanics of slots machines operations. However, people who were identified as likely problem gamblers reported that they were gambling more. Brown and Harrigan theorized that the players felt that they now “understood” the machines and could more easily overcome the obstacles.
As a responsible gambling initiative, the Hannigan/Brown experiment appears to work only for players that actually heed the tips and advice and not for those who are having problems controlling their gambling.

Sheona Hurd, director of social responsibility strategy for OLG, feels that the experiment was “very successful” in that it gave players the chance to better understand the machines that they were playing. OLG intends conduct a follow-up test later this year.

Psychology of the Slot Machine

Slot machines are known to be highly addictive – they have been referred to as the crack cocaine of the gambling world. Slots offer players a thrilling buzz with every hit of the button, whether they’re playing at a club, online or in a casino. Game developers spend a lot of time and money to understand the players’ thought processes of players in their drive to create more engrossing, more attractive and more profitable machines.

20% of slots gamblers create 80% of the revenues. These are the players who become obsessed with the game and find it difficult to switch the “off” button. In researching slots players, psychologists found that the gamers generally claimed that they understood that slots are a complete game of chance and that the game favors the casinos. Yet they continue to play, even knowing that the odds are stacked against them.

The question then becomes, if slot machine players truly understand that they will lose money over the long term, why do they play the machines at all? Psychologists feel that years of agreeing with criticism had allowed the slots gamers to build up a persona in which they deflect inquiry into their habits. Fear of being ridiculed leads the gamers to give automatic responses that actually hides their true feelings about gambling.

According to cognitive theory, compulsive slots players rationalize their continued gambling despite any heavy losses they might suffer. They generally believe -- at some level -- that they have some kind of way of interpreting fortune or special skill. Sometimes they believe that they have psychic premonitions or special feelings that “tell” them what slot machine will bring them luck. For psychologists looking to study this kind of behavior, the problem involves how to break through this investigative barrier.

In the 1980s an experimental psychologist known as Robert Ladouceur was able to come up with a method of studying the thoughts of gamblers whilst they play slot machines. Rather than relying on the standard interview or questionnaire approach, he simply asked players to vocalise their thoughts whilst spinning the reels of their favourite game. This way he discovered, as was suspected all along, that players suffer from irrational thinking in their strategic approach to the game.

“Gambler’s Fallacy” is one of the main types of this kind of irrational thought. Gambler’s Fallacy is where a slots player convinces himself that every loss incurred will take them nearer to a win. This is often accompanied by the idea that games go on rushes of wins or winning streaks in which the gamer believes that luck has arrived. In point of fact, every spin on a slot machine is random, and each one offers the same probability of delivering a jackpot.

Researchers have also discovered that slots gamers like to personify the games who talk to the game as if it’s a real person. They act as though their pleas will in some way influence its outcomes. Gamers beg, implore a mysterious fateful force to ‘just give them that one win’, rant, command and thank the game when a win is achieved.

Many researchers believe that ultimately, the force that drives people to gamble is anticipation – waiting for a small risk to pay off in a mighty fashion. Most significant slot machine wins are spent outside the casino as a kind of reward for a player’s good fortune. The driving force between every spin of the reels is the thought about what might be done with the winning cash payout.