Casino Gambling on the Ballot 2018 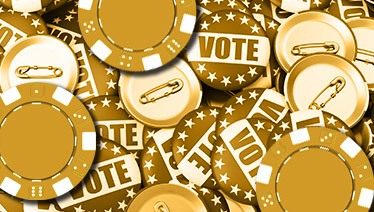 The coming year is expected to be a banner year for American gambling aficionados. Now that the Supreme Court has ruled that states can legislate sports betting gaming in their locale there is a new push to open new sports betting venues, land-based casino sites and online casino gaming options.

Arkansas has taken the casino question to the voters in the November 2018 election. Observers foresee that the election will be close.

Arkansas Issue 4 will appear on the ballot as a question of whether to authorize the establishment of land-based casinos in Crittenden, garland, Poke and Jefferson Counties. The question, if it passes, will evolve into a constitutional amendment that will introduce casino gambling to Arkansas.

If Issue 4 passes the state will issue four casino licenses to specified licensees:

In summary, if the measure passes, Southland and Oaklawn would receive automatic licenses to conduct casino gaming and new applicants would receive the remaining two licenses after their applications are accepted and they pay the required fees. The new licences would be granted to applicants who demonstrate experience in conducting casino gaming or who provide a letter of recommendation from the county judge.

Taxes and Other Casino Obligations

Tax revenue from casinos are to be distributed with

In May 2018 proponents of the measure joined together with other supporters of other initiatives destined for the Arkansas November ballot. They wanted to obtain an injunction that would require Arkansas Attorney General Leslie Rutledge to certify the measure’s ballot title which would clear it for signature gathering. The Arkansas Supreme Court ruled on a case brought by David Couch who had submitted a measure about another issue. The Court ruled that Rutledge must finalize the needed information so that the measures could proceed with signature gathering.

By early July initiative sponsors were able to submit 96,000 signatures to the secretary of state's office.  The office validated 70,054 signatures and by late An additional  43,952 signatures were submitted, giving the meausre a total of 84,859 valid signatures, over the number   needed to put an amendment on the ballot. The measure was certified for the ballot in early September

The measure is being promoted by Driving Arkansas Forward, a group that believes that bringing casino gambling to Arkansas will bring jobs and needed revenue to the state. Nate Steel,counsel for the group, said that the group was “grateful” for the court’s decision. “We are confident Arkansans will vote to keep casino entertainment dollars in our state when they cast their ballots,” said Steel.

One of the groups that challenged the measure, Citizens for Local Choice, said that his group was disappointed. Christopher Burks, group lawyer, said that he believed the court mischaracterized arguments against casinos but he acknowledges that it’s now up to local and state voters to reject the casino amendment. He said “It’s unfortunate the Supreme Court reached an outcome favored by rich folks and lobbyists, but we’re confident that the people of Arkansas will make a decision in their best interest.”

Native American tribes are supporting the initiative. Two  Oklahoma Native American tribes each donated more than $1 million to the pro-casino campaign. Quapaw Nation chairman John Berry intends to build a casino in Pine Bluff if the amendment passes. Pine Bluff CEO Ryan Watley wants to see a casino built in his city. He believes that the city needs to grow and invest in quality of life and in job creation and he wants that investment to stay in Jefferson County. A partnership, Watley said, will mean that the city and its residents will reap the benefit of the investment.

Watley plans to use local subcontractors to ensure that the money stays in Pine Bluff. “What we did with GFPB is started a construction trade alliance where we have seen some fruits of the initiative and have been able to retain jobs by getting local subcontractors involved in different projects. We must work now to begin introducing some of the qualified workforce to the chief and his team and begin preparing others to participate in these projects. That’s how we begin to prepare ourselves pass or fail to be able to succeed in the future because this will not be the only construction plan in the city.”

Opponent John Colbert is focusing on the social and economic losses that occur in locales when casino gambling is instituted.

Colbert also addressed the forum. He said “Since the lottery passed in 2008 there have been a hundred opportunities for this state to take action to address the fastest growing addiction amongst kids in America, which is gambling. “I am not against gambling I’ve worked other campaigns to expand it. The casino measures are in a bad place in some sense because the state government and others have done nothing to address addiction. Anyone that travels the state and goes to a gambling facility be it lottery or casino recognizes that our state like any other does, in fact, have a number of people with addiction problems that are mental health based.”