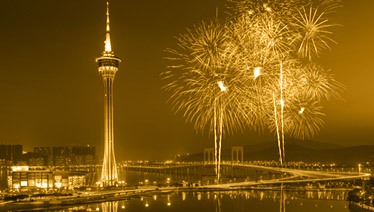 Gambling revenue in Macau rose only 5.7% in February, short of analysts' expectations. Despite the disappointment the gambling hub showed a gain for the 19th consecutive month, encouraging new casino building efforts and renovations of older casino sites.

While expectations were for revenue growth to be between 7% and 12%, the casinos expressed satisfaction with the smaller-than-expected increase.

The spurt in Macau Casino growth comes after a five-year economic slowdown in China and a government crackdown on corruption. "It's been two and a half years of being very stressed and fearful, so people are starting to let loose now in China." said Lawrence Ho, head of Melco Resorts. Ho's group operates casinos in Russia and the Philippines. He's vying to build a multi-billion dollar casino in Japan which would be the second Pacific-area casino for his group.

Some of the high spots of the February earnings reports include those of the Galaxy Entertainment and SJM Holdings which have exceeded analyst expectations and show significant increases in YOY net profits.

Macau has a development plan for its casino industry and it doesn't only involve gambling. Macau is favoring development plans that include other services such as shopping, entertainment, online games, amusement parks, etc. The government has decided to focus on the mass market to bring visitors into the region, rather than try to attract VIPs.

The wisdom of this is questionable because Macau’s recovery since August 2016 has been largely fueled by VIP play. That trend accelerated in last year, causing analysts to diverge on the wisdom of the government's focus.

The casinos are basically behind the move to attracting the mass-market. It's a more stable market and more profitable. Customers pay less for gaming activities but add to their expenditures with non-gaming items such as meals and hotel rooms. Those are items that the VIPs expect to receive for free which reduces the profits.

It's also easier to cater to the mass market rather than to the VIP segment. The VIP players involve high-rollers from mainland China. The junket promoters that bring in these players take a large percentage (roughly half) of the profits. The junkets give credits to their customers which helps them skirt China's currency restrictions – a concern to the casinos.

Since travelers can only cross the border legally with 20,000 RMB (foreign currency equivalent of $5000), which is barely enough for a handful of wagers by the average VIPer, the junket promoters are in a position of power. By appealing to mass market travelers, the casinos remove themselves from dependency on those junketeers.

Some of the doubts about VIP sustainability center on the sector's innate volatility. There is a relatively small number of participants in the VIP sector. The government continues to pressure the casinos to create a more well-rounded tourism destination which forces the casinos to make a choice – VIPers or mass market focus. As the question becomes more relevant for more casinos, Macau authorities have increased regulation of junkets and the mainland has tightened oversight of financial outflow.

It appeared that the market had rebalanced in 2017 but after two quarters of 37% VIP growth, rate decelerated to 22% in the 4th quarter. The VIP market slowed in December while the general market grew 17%. Grant Govertsen, Union Gaming Macau managing director said that based on the earning reports from the six casino concessionaires, the mass market comprised 52% of the casinos' total revenue.

In January the revenues surged 36% to $3.28 billion. JPMorgan analysts D.S. Kim and Sean Zhuang estimated VIP growth at 50%, showing that the December slowdown was an aberration. Praveen Choudhary of Morgan Stanley estimated that the mass market was growing impressively while VIP growth was also recorded.

The anti-corruption campaign instituted by President Xi was a mitigating factor in the Macau 2014 slump. A global tourism and leisure center rather than concentrating solely on casino gambling, China's Five Year Plan states that Macau should develop “appropriate diversification and sustainable development of the economy” -- more non-gaming attractions which will lure visitors that want to do more than gamble. This, in turn, will translate to fewer VIPS and more mass customers.

VIP revenue fell in the second half of 2014 as VIPs got the message and stayed away from Macau. The casino industry finished the year down 11%, falling another 40% in 2015. Alvin Chau, leading junket promotor and SunCity chairman, declared “the end of the Macau dream.” But by the time Wynn Resorts opened its VIP-focused Wynn Palace in Cotai in 2016, the recover was underway.

Today the casinos seem to be unclear about their direction. In 2017 VIP revenue grew 27% while mass grew 10%. Operators report that VIP revenue growth is overtaking mass growth though analysts Robin Zhu and Vitaly Umansky write that "the trend is not likely sustainable.”

In February gaming revenue was up 6% from a year ago but analysts had expected more. However, the season of the Chinese New Year includes the first two months of the year and for those 2 months, the combined revenue increase was a healthy 20%. According to JPMorgan, the mass revenue grew 14% while VIP revenue jumped 26%.

Gaming concessions are set for renewal, meaning that casinos will be under increased pressure to promote mass-market tourism as the government wishes. Infrastructure changes, including a high-speed rail network for the mainland, a light rail for Macau and a Hong Kong-Zhuhai-Macau bridge are being implemented to support mass market growth. To satisfy all concerns, the chances are that the casino industry in Macau will put efforts into building both markets.