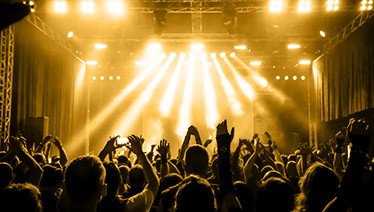 Check out the top acts at the big Vegas casinos and you’ll find some of the entertainment industry’s biggest names. Singers and other performers including Celine Dion, Elton John, Mat Franco, Penn & Teller and Carrot Top are only a sample of what casino-goers can expect when they visit the live casino venue.

Casino entertainment is one of the biggest reasons that people go to a land-based casino as opposed to playing at an online casino. The concerts are often free or open to casino patrons at reasonable costs and players frequently score free tickets as part of the casino’s bonus packages for their games.

Vegas casinos aren’t the only gaming venues to put big money into entertainment. A short perusal of acts in other locales show Grand Ole Opry and Country Music Hall of Fame stars in Edmonton, a Comedy Club at the Mohegan Sun Pocono in Pennsylvania and even the popular Air Supply band at the Island Casino and Resort in Harris Michigan.

For many casinos, the decision seems clear. Even if they lose money on the events themselves, it's worth the cost of bringing in the acts in order to attract the patronage of event-goers who must stroll past poker tables, slot machines, restaurants and beer carts to watch the performance. For the casinos, this is strategic pairing.

“It’s a brand-new market,” said general manager Ameet Patel of Penn National Gaming. “You need to create multiple reasons for people to come visit.” Entertainers, especially those on the 'blast from the past' tours, find that a significant portion of their tour destinations are casinos."

The performers also like to perform at the casinos. One singer-guitarists from a ‘80s New Wave band explained why. “We attract the older fans. And the venues are usually pretty nice.” The shows often draw capacity crowds, especially those performances that are held in smaller casinos where locals fill out the theatre seating. In recent performances in Columbus Ohio, Sheena Easton and Morris Day & the Time drew capacity crowds and the casinos were jammed.

In the past, regional casino acts were largely limited to no-name crooners and lounge lizards. Today, the stigma of playing such venues is gone. Gary Bongiovanni, editor-in-chief of the concert-industry publication Pollstar said that casinos provide “an important booking stop for a lot of artists, especially ones who are not red-hot. And there are a lot of fairly well-established acts that have found those situations to be lucrative.”

In fact, a number of casinos situated outside major urban areas - such as the Pechanga Resort & Casino in Temecula, California and the Mohegan Sun in Montville, Connecticut --  have built large auditoriums that host ticketed shows by A-list acts including Rihanna, Bob Dylan and more.

For the casinos, the question is, is the expenditure for these sort of acts worth it?

Sarah Tanford, an assistant professor at the University of Nevada, Las Vegas, studied the issue. She found that increased head count from casino concerts boosted slot-machine play but had no effect on profits from gambling tables. Tanford did note that the acts benefited on-site restaurants on the casino premises.

Tanford is a former Harrah’s Entertainment executive who now teaches strategic management at the University. “The entertainment is another amenity in its own right” she said. Casinos “can’t assume any indirect revenue” from those efforts.

Ameet Patel has just taken over the management of Penn National. He confirmed not all of his Columbus casino concerts have broken even. He also said that they don’t necessarily draw patron spillover to food, drink and gambling as he had expected. Presently, he is conducting surveys among casino patrons to determine what kind of acts might be the most successful.  “The more names we have, the better handle we have on what they like and don’t like” said Patel. Patel said that he considers the first year “one huge test.”

Some gambling venues, such as Columbus’s Scioto Downs Racino (slot machines only) book touring acts which appear as paid shows. Spokeswoman Ashley Redmon explained, “We’re looking at these concerts as a separate entity of bringing entertainment to the community. If they stay and play, awesome.”

Redmon said that concession sales (including alcohol sales) plus the ticket revenue ($20 to $40 per person) “pretty much cover” the overhead.

Some casinos are actually seeing their smaller, local competitors draw players away by offering good entertainment, even though the larger venues are closer to the gamers’ homes. One example is the WinStar World Casino and Resort which is located in Thackerville Oklahoma. The Thackerville casino opened a Global Event Center in 2008 and it’s an appealing draw to casino-goers who are traveling from their North Texas homes – even as far as the Dallas and Forth Worth areas – to enjoy the performances and play at the casino.

According to Doug Curtis, president and CEO of the AT&T Performing Arts Center, a non-profit enterprise, WinStar has a schedule of “A-list talents” who have played, or will play, at the venue. Some of the rock, pop, country music and comic talent that has performed, or will perform, in Thackerville, includes Jackson Browne, Bob Dylan, Tracy Morgan, Jerry Seinfeld, Amy Schumer, Miranda Lambert, Keith Urban, Kacey Musgraves and Brad Paisley. North Texas fans have a touch of Las Vegas close.

Curtis is worried. “Casino competition doesn’t just affect our nonprofit performing arts center.It affects all area venues, whether nonprofit or for-profit, and AEG and Live Nation. But it’s how they’re getting these talents that affects us the most. They’re paying ridiculously large sums of money” — income that Curtis contends is derived almost entirely from gambling revenue — “but what’s really killing us are the radius and time clauses they impose. If it were only money, we could compete. But it’s not.”

According to Curtis, WinStar imposes limits on how close, or within what period of time, a performer can perform elsewhere in the area before and after a WinStar booking. Performers are prohibited from performing for periods ranging from six months to a year, and at a venue within 100 miles of WinStar, before and after a gig at WinStar. That, according ot Curtis, is what's killing his non-profit center. But he's committed to keep up the fight.