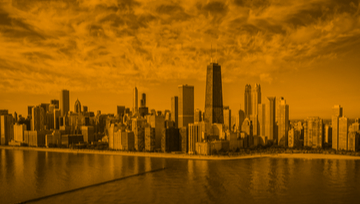 If plans move forward as intended, Chicago will soon become the largest American city to host a casino.  Chicago leaders have been pushing Las Vegas-style brick-and-mortar casino and online casino development for the Windy City and their efforts are bearing fruit.  Illinois lawmakers have approved their plan for a Vegas-style Chicago casino as part of plans for gambling expansion.

This summer, Gov. J.B. Pritzker signed a law authorizing a massive expansion of gambling in Illinois. The new law allows for establishment of casinos in Chicago's northern suburb of Waukegan, the south suburbs, Danville, Williamson County in southern Illinois and Rockford. Those sites will be in addition to the state’s 10 existing casinos.

Most of the casinos will be allowed up to 2,000 gaming positions – slot machines and seats at table games -- which was the previous cap for all casinos. The Williamson County casino will be licensed for 1,200.

The biggest new casino development will be in Chicago.  That venue will be licensed for up to 4,000 “gaming positions,” though some of those positions might be used to place slot machines at Midway and O’Hare International airports. Observers say that a Chicago casino could rival those on the Las Vegas Strip.

Las Vegas-based Union Gaming Analytics was selected by the Illinois Gaming Board to study the feasibility of a city casino. The report was delivered in August and now the Board must use those findings to evaluate applications, conduct background checks and approve licenses for all the new betting options. They will be laying the groundwork for the Chicago casino and the other approved locales.

The board has a year to review applications and conduct background checks before it issues licenses for the new casinos. Potential casino operators must obtain approval from the local city or county for their chosen locations. Once that approval is given, public hearings will be held in each location. Once an operator receives a license it will be able to operate from a temporary location.

No one expects the process to go quickly, especially in Chicago where disputes over the desirability of a Chicago casino are raging.  The first hurdle that must be overcome will involve the location where the casino will be built. Mayor Lori Lightfoot would like to see the casino built downtown, perhaps in the aging McCormick Place building or in the state-owned James R. Thompson Center.

One of the major rationales behind legalizing a Chicago casino involves enabling the city to use the profits to pay down its current, enormous pension debt. If everything goes well, that will be a reality.  A feasibility study said that a possible gross of $950 million could be realized by the fifth year of a Chicago casino operation.

Some lawmakers are trying to rectify the plan but no change has yet been approved.  Legislators must contend with opponents who argue that the social cost of having a casino in Chicago makes it a cost that the city can’t accept.  The Illinois Church Action on Alcohol & Addiction Problems, a nonprofit group, objects to the fact that the casinos will “prey on the poor and enable — if not tacitly encourage — gambling addiction.”

The Illinois Gaming Association warns that expansion could oversaturate the southern suburbs where the new casinos will be located.

But the city is banking on income from the casinos and most officials believe that the question is no longer “if?,” but “when?”, “how?”, and “where?” Despite delays, a Chicago casino is seen as a sure bet.

The new law also authorizes the creation of sportsbooks at all of the state’s horse tracks, casinos and at sports arenas that have seating for at least 17,000 people. The Illinois Gaming Board will license sports betting providers separately and those licenses will include a provision to offer online sports betting services.

To place an online sports bet, the bettor will first have to come into a land-based facility where s/he will register for an account. Once an operator has held a license for 18 months, they will be able to operate online-only sportsbooks with an online sportsbook license. There will be three online-only sportsbook licenses granted by the Gaming Board and those licenses will be awarded through a competitive bidding process.

Racetracks will now be able to offer slots gaming along with sports betting.  Special licenses will be granted to each facility to enable them to offer slots and sports betting.  Arlington Park in Arlington Heights and Hawthorne Race Course in Stickney will be allotted 1200 gaming positions and Fairmount Park in Collinsville, near St. Louis will receive a license for 900 positions.

The new law gives licensed restaurants, bars, fraternal and veterans organizations the option to feature video games. Small truck stops will be able to offer six video gambling terminals each while large truck stops can offer up to 10.