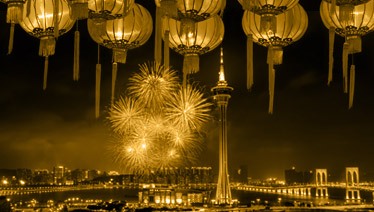 The territorial government of Macau was pleased to host a record number of Vegas casino tourists during this month’s celebration of the Chinese New Year. The Chinese New Year is celebrated over the course of a week and officials were pleased to note a large jump in year-on-year tourism which brought the numbers of visitors to close to 38 million for the year.

One of the major factors in this increase was the Hong Kong  - Zhuhai – Macau Bridge which connects Hong Kong to Macau. The bridge, which opened this year, was a major element in helping the territory boost its tourism numbers during the celebratory week of the Chinese New Year.

Occupancy rates were up significantly. Macau welcomed almost 900,000 tourists over the week of the Chinese New Year – that was a 26% increase over 2018 which when visitation rose 12% over 2017. The city recorded an average hotel occupancy rate of 94.5% in 2018 and that rate was met and surpassed this year.

200 additional flights were scheduled to Macau during the New Year week by the  Macau International Airport Company.  Macau International released a statement saying that they needed the extra flights ‘to accommodate the surging travel demand from local residents and tourists to bring more choice and convenience to passengers.’

Currently, the big concern in Macau is that high rollers will start limiting their trips due to China’s current economic slowdown as well as to concerns over the US/China trade tensions. Consumer spending has started to decline in China and the effects of the economic downturn are being felt in Macau. Monthly casino revenue fell in January in Macau for the first time in over two years.

There are some bright spots on the horizon. The Las Vegas Sands is investing significant resources in Macau. Their 2018 financial statement showed that the company saw a 7.8% increase year-on-year in net revenues to $13.729 billion. This comes in conjunction with an associated $9.819 billion rise in casino income which reflects an 8% gain over last year. The casino operator reported that it earned 62% of its full-year revenues in Macau. Sands owns the Parisian Macau, the Sands Cotai Central, the Sands Macau, the Venetian Macau, and the Plaza Macau.

In Las Vegas, Sands Corporation revenues reached $2,218 billion. Sands operates the Venetian Las Vegas, the Palazzo Las Vegas, and the Sands Bethlehem.  Sands Las Vegas experienced a decline of 0.13% year-on-year and some observers are questioning whether Sands might increase its holdings in Macau to compensate for its poor showing in Las Vegas. Overall net revenues for Sands increased year-on-year by 2.5% to hit $3.48 billion. Net income for Sands decreased by 9.5% year-on-year to $2.951 billion.

According to the Macau Gaming Inspection and Coordination Bureau (DICJ), the gross gaming revenue (GGR) for gaming in January reached $3.08 billion, 5% lower than the same period last year. This decline marked the first year-on-year decline of monthly GGR in Macau since July 2016. Analysts believe that the numbers point to reduced growth for the year which, they say, is no surprise.

The December GGR rose 16.6% and total 2018 GGR was $37.57 billion, 14% higher than in 2017.  But  Union Gaming’s Grant Govertsen spoke about a foreseeable decline, commenting that he expected a “flattish” January. Even with the February growth, driven by the February Chinese New Year, Govertsen said that he predicted a slow first quarter in 2019.

Govertsen said many mainland visitors to Macau are day trippers. They travel via the new bridge, stay for the day and leave at nightfall without spending much money or visiting the territory’s casinos.

A mid-January Morgan Stanley analysis predicted that, even with the upsurge in holiday visitors, gambling spending would decline. This, they say, is because, while the number of day visitors and tourists increased, of those players who come, most are casual gamblers. Fewer high rollers are coming. Since it’s the high bettors who influence casino revenue, the casino operators aren’t pleased.

Suncity, a junket operator that extends credit to high-stakes gamblers, reports that they saw betting volume drop 3 percent during the first five days of the new Chinese year. Andrew Lo, executive director of Suncity Group Holdings Ltd, said that he’s still optimistic.  He said that big bettors often avoid the festive days but that doesn’t mean that the VIPers won’t be back.

Analysts say that recent GGR numbers reflect GGR-per-day in weekends as compared to weekdays. They say that while revenues are expected to fall in the first half of 2019, they are hopeful that the second half of the year will bring single-digit GGR growth. All this as demand for junket trips from China has declined and online competition is weakening sales.

Standford C. Bernstein, a brokerage firm that specializes in Macau financial affairs, reported that it has seen a number of factors that are contributing to lower Macau GGR. One of the most surprising and meaningful is a government smoking ban that bans smoking in most areas of Macau casinos. The Macau government might be forced to rethink that ban which has alienated scores of Chinese VIP casino visitors.