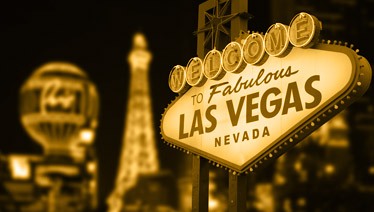 Worries about the impact that online gaming might have on the Vegas casinos seem to be unfounded. Even as playing online Vegas games online grows, profits at the Vegas brick-and-mortar casinos is skyrocketing, leading industry insiders to predict that the economy can look forward to new developments and investments in Vegas entertainment.

The image of neon lights has been synonymous with Vegas casinos since the birth of the Vegas casino industry in the 1940s. Today the Las Vegas municipality has decided to expand its downtown restoration project with old-fashioned neon lights.

Downtown Vegas was once regarded as a dying part of the city. The big casinos were located on "The Strip" and the downtown area was largely neglected, populated only by unglamorous  budget accommodation facilities and small, out-of-the-way casinos.

Now the municipality sees potential for growth and development in its downtown area. Pawnshops and "adult shops" are disappearing, new casinos are being built and esports facilities arenas and zombie apocalypse experiences are taking over the landscape.

Fremont street is no longer a simple, seedy outgrowth of the Strip – it's developing a life of its own and the City is taking notice. The Las Vegas Centennial Commission recently approved a $762,000 budget to restore and reinstate some of the classic signage from the shuttered, forgotten motels that once populated Fremont East. These include signs from historic dives such as Las Vegas Motel, Starview Motel, Gables Motel, Travelers Motel, Lucky Motel and Valley Motel. The buildings are largely still standing but they won't actually operate as motels – instead they will be restored to their former lo-fi glory to illustrate the "rough and tumble" atmosphere of 1940s Vegas.

City Attorney Brad Jerbic described the lights as "our signature” while city councilman Bob Coffin promotes the innovation as part of the city's commitment to the downtown area. Coffin said that “I think that has lit a fire in the city, and that’s why we’re willing to spend our funds to revive this downtown and capture the past.” he said.

Figures from the Nevada Gaming Control Board (NGCB) show that Reno played an important role in the June report. Casinos in “The Biggest Little City in the World” saw its GGR rise to $59.4 million, a nearly 20% increase over last year.

Strip casinos in Las Vegas generated almost $524 million which accounts for a gain of more than five percent when compared to June of last year. Downtown Las Vegas finally cooled off. GGR along Fremont Street and the surrounding vicinity totaled $44 million, a 4.4 percent decline.

Observers note that slots machines – penny slots, quarter slots and $5, $25 and $100 slots won $472.5 million, a 3.3 percent decline. Nickel slots were up 13 percent There were also losses from Megabucks machines.

The biggest gain was from table games which came in 15 percent higher, bringing  a total of $339.8 million, not only for Clark County but for the state as a whole. The table games increase offset the slot decline for an overall monthly gain.

It's not just in Nevada where casino GGR is up. Statistics show that gambling GGR is up this year nearly three percent nationwide. These numbers confirm that the industry is strong, even though gamers are contending with increased casino resort fees.

What's driving the optimistic numbers? There are a few different theories but many observers point to international events to explain the phenomena. They note that since the Chinese government’s 2013 crackdown on corruption, baccarat win both on the Las Vegas Strip and in Macau has slumped. Since 2013 Las Vegas Strip operators have invested substantially in a range of non-gaming attractions to reduce their reliance on high-end international gamblers. (the Stanley Cup-contending Golden Knight hockey team ismost famous and successful).

The success of that initiative can be seen in that lower baccarat play didn’t cause the numbers to plummet. In fact, the Strip’s overall improvement in table games shows how important the non-gaming attractions are to Vegas these days and that investing in such attractions is the right decision for casino operators to take.

The overall strength of Reno casinos, Las Vegas Downtown Casinos and the Las Vegas Strip outside of baccarat is a sign that investments outside of the gaming pits have been successful. You can expect to see such investments continue. In the coming years you can expect operators to increase capital expenditures on non-gaming amenities.