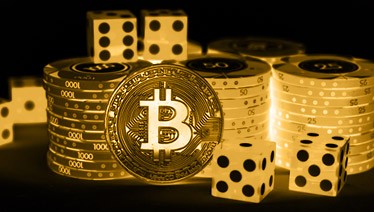 Playing Vegas casino games using cybercurrencies is a gamble in itself. Cybercurrencies are new and there's an element of insecurity in using them. Yet some of the world's biggest investors have put their eggs in the cybercurrency basket – maybe not all of their eggs, but a significant portion of the basket. That sends a message to others that those in the financial world who are up-to-date on the trends and options see cybercurrencies as the wave of the future.

Cybercurrencies (generally referred to as "bitcoins" though, in fact, bitcoins are only one form of cybercurrency) are snippets of code that represent ownership of a digital concept – something of value. Bitcoins are acquired, used as forms of payment and traded via distributed networks that maintain ledgers of balances of the individual bitcoins.

Using a cybercurrency users and investors can send payments from one to another by electronic means. There is no central authority (bank or payment gateway) involved since the cybercurrency is produced by computers that "mine" the coins using specially-designed software. Basically, cybercurrencies share characteristics of traditional currencies but verification is based on cryptography.

Many land-based and online casinos are now offering cryptocurrency users the option to play with bitcoins and other forms of cybercurrency. Should a gamer take advantage of these opportunities? Cybercurrency usage is still young so there's no yes or no answer pertaining to the wisdom of playing at a casino with a cryptocurrency. As you make your decision you might want to think of some of the pros and cons involved in cryptocurrency gambling activities.

The cryptocurrency market is volatile, and has been since its inception. The price of a coin can fluctuate from 1% - 40% within a matter of weeks. At this point, the price has more than quadrupled just in the last year but in 2013 one bubble burst and users lost significant portions of their investments. If you want to gamble with a cybercurrency, try to analyze whether the market is currently in a bubble. If you think that that might be true, consider putting off your usage, at least on a big scale, until things stabilize.

You can only trade cryptocurrencies on the stock market with one of the cryptocurrency GBTCs. That means that, if you enjoy a big win at the casino and wish to invest it in stocks, you'll need to use a company like Coinbase to facilitate your investments. These companies tend to charge a premium for their services. You can find the lowest fees on the open exchanges of the internet where their fees are low but these open exchanges have a higher risk and complexity. Between finding a seller and paying the premium fees the options for trading your casino wins carry costs that are hard to calculate but can eat into your gains.

Wave of the Future

Cryptocurrencies might well be the wave of the future. The trend seems to indicate that using cybercurrencies will be an important medium of exchange and value storage in the future. So it may be a good long term bet – maybe not for day traders but for long-term investors who want to grow their casino winnings through investing their assets.

Cryptocurrency market is young. Financial analysts project that future prices will continue to rise, making it a good bet to lay your casino wins in the cryptocurrency basket. Some notable observers project that bitcoin may move up to as much as $600K. That makes it a worthwhile focus for anyone who wants to see their money grow.

Today's high cybercurrency prices may indicate that the cryptocurrency is in a bubble  but even if the value decreases, chances are that it will increase again in the future. The trends seem to indicate that governments are also viewing cybercurrencies as the wave of the future, giving rise to a feeling that these currencies offer a good option on which people can lean. There is a lot about which to be excited in the field.