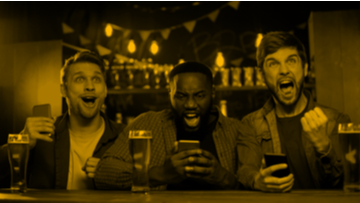 In the District of Columbia, the district’s sports betting website is now active and is accepting bets. Currently, bettors can wager on German soccer league games and MMA matches. As professional sports leagues begin to return to action in the coming weeks, options for betting on those games will be available as well.

The DC sports betting app is managed by the D.C. Lottery. Bettors must be at least 18 years of age and be physically present in the city to place a bet. Wagers can’t be placed while on federal property, such as in Rock Creek Park or on the National Mall.

Sports betting isn’t new to D.C. Casey Clark, senior vice president of strategic communications with the American Gaming Association noted that “This isn’t a new activity for Washingtonians; just doing it legally is a new activity.” Casey and the AGA want to see the new sports betting structure focus on responsible gaming.  “This is not a job. It’s not a way for people to go get rich,” Clark said. “This is a form of adult entertainment, and it should be treated as such.”

The AGA is promoting a program of responsible gaming in which bettors are encouraged to :

In addition to straight win-lose bets, the DC betting app will give wagerers the opportunity to place prop bets – bets on things like the number of hits that a player will make during a game or the number of overall points scored. These types of betting options go beyond traditional wagers.

The DC betting app also accepts live bets, so bettors can wager on the action as its happening. “If you look at more mature sports betting markets in other countries, in-play sports betting or kind of live-action betting becomes really critical,” Clark said. “That percentage is something like 85% of the action that’s taken in a place like the U.K., which has had legal sports betting longer than it’s had a Premier League…there it’s just ingrained as part of the sports culture,” he said. “And here, it’s a little bit different — so it’s going to take us a little bit of time to get accustomed to the kinds of bets and the opportunities that are out there.”

Currently the DC betting app is operating at bars and restaurants where there are apps and kiosks that feature the app. In the near future the app will be available online so people can bet from home.

Recently, a push to bring sports betting to Louisiana gained momentum. The State Senate approved a bill that will allow sports wagering on a parish by parish basis if it passes the full State House and is signed into law by the governor.

If Senate Bill 130 passes, state residents will vote in November on a referendum of whether to allow wagering on professional or colligate sports in their parish.

Sen. Gary Smith Jr. calls the gambling industry “our business partners.”  He would like to see Louisiana get on par with other states that have legislated gaming and gambling. “We’re gonna say it’s legal, by way of this citizen’s bill, make it the best we can make it, and give our state all the tools it needs to compete with other states and not have our people at a disadvantage,” Smith said.

Smith sees sports betting as a good move for the state. “That industry’s become a good partner for the state. It produces a lot of good jobs, stable jobs, for thousands of Louisiana’s citizens, many who have made careers out of it,” Smith said. “Gaming has produced a very stable and viable source of revenue for the state. It brings in more than oil, gas and tourism at this point. And with all of these outlets shut down for two-plus months, it’s just another element that reduces revenues for our state.”

Smith is also worried about issues related to responsible gaming but feels that since sports betting is happening anyway, it’s to the state’s advantage to keep an eye on things by making it legal. “We know people in Louisiana bet on sports,” Smith said. “This will give them a legal and safe place to do so if they’re going to do it. We already have legal gaming, so this is just another aspect of it. We haven’t had all the ills that were talked about when (gaming issues) those things were passing all these years ago. It’s been a very regulated industry……it takes (betting) off the black market and gets it into a legal element of what you’re doing, something with guidelines, rules and regulations. They know they’re betting safely if they win and they’ll get their payout in a safe environment.”

Louisiana’s Senate approved a bill to legalize sports wagering last year but it didn’t pass in the House of Representatives. Now, says Smith, it’s in a better position to push through.

California legislators are looking at ways to bolster California’s budget which has been battered by coronavirus. In the latest round of sports betting legalization efforts, two lawmakers are promoting sports betting  as a way to bring in needed revenue. The proposal immediately reignited the ire of powerful industry players who are determined to protect their interests.

State Sen. Bill Dodd and Assemblyman Adam Gray have been lobbying to get a constitutional amendment placed on the November 2020 ballot which, if it passes, will allow casinos and horse racetracks to also offer both retail and online sports wagering. The proposal brings California’s casinos, which are run by native tribes, and card rooms that offer blackjack and poker, into conflict.

Casino representatives say that card room operations are illegal and that by writing them into law, the card rooms would enjoy a “a massive expansion of games.” The tribes have been fighting the card rooms in court for years. The card rooms contend that  the proposal would change the way player-dealer games such as poker have operated for decades.

If Dodd and Gray’s proposal is passed by two-thirds of the legislature, the referendum would go on the ballot in November and would have to be approved by a majority of voters to be implemented. Sports wagering enthusiasts are hoping that the measure will succeed and the four major professional leagues are supporting the measure as well.

If the measure is put to the ballot, it would allow for a 15% tax on gross revenue for online or mobile wagering and a 10% tax for on-site gambling. The legislation would require that technology be used to ensure that bettors are physically within California’s borders when bets are made and that safeguards to verify gamblers’ identities and ages are put into place.

Dodd and Gray say that the state could raise $200 million in the first year of sports betting which would eventually grow to $500 million to $700 million and help carry the state over the $54 billion budget deficit caused by the pandemic. “Revenue from sports wagering will help us avoid teacher layoffs and painful cuts. At the same time, it will allow us to regulate a practice that happens anyway,” Dodd said.