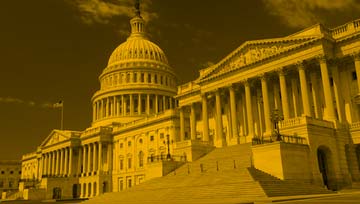 Last month, a federal court ruled that a recent Department of Justice interpretation of the 1961 Federal Wire Act was unconstitutional regarding Vegas casino online gameplay. The DOJ sought to suspend online gambling activities across a number of states but the court ruled that the Wire Act’s scope did not address online casino gaming.

Now, Congress is expressing its frustration with the DOJ’s focus on Internet gambling. Several members of Congress are sponsoring a bill that will remove funding from any DOJ effort to pursue additional efforts to reinterpret the Wire Act in a way that makes online betting illegal.

The court’s ruling was issued after the state of New Hampshire challenged a US Department of Justice’s revised opinion of the 1961 Wire Act. The federal judge who presided over the case, Paul Barbadoro, ruled that the Wire Act only applies to sports betting. It does not apply to other forms of online gambling, which the DOJ attempted to indicate in its reinterpretation of the law.

The lawsuit was filed by the New Hampshire Lottery Commission and backed by New Jersey and Michigan. The NH Lottery commission uses the Vermont and Ohio based NeoPollard Interactive vendor to operate its lottery. In its lawsuit, the Commission noted that, if the broader interpretation of the Wire Act is adopted, the commissions that it receives from its state lottery would be regarded as funds coming from an illegal source.

The state of New Hampshire would have a lot to lose if the more than $90 million in annual lottery revenue were to disappear.

Not everyone was pleased with the decision. In addition to anti-online gambling groups, the National Association of Convenience Stores, which has seen store profits from lottery ticket sales drop due to online purchases, and the Coalition to Stop Internet Gambling (CSIG), which protects the interests of brick-and-mortar casinos, were dismayed by the court decision.

Congress is now stepping in to the fight. A bill has been proposed that will defund any efforts by the DOJ to redefine the scope of the Wire Act..

The bill was filed by the Rules Committee which is responsible for paying DOJ salaries. It is being sponsored by Rep. Hank Johnson and is backed by veteran lawmakers including Rep. Andy Barr and Rep. Sanford Bishop.

The bill states simply, “None of the funds made available by this Act may be used to enforce the Department of Justice Office of Legal Counsel memorandum entitled ‘Reconsidering Whether the Wire Act Applies to Non-Sports Gambling’.

Basically, that means that Congress will not allow any funding to go towards any Department of Justice efforts to enforce their interpretations of the Wire Act. That, together with the Department’s recent loss in the New Hampshire case, means that the administration will have little luck in using the Wire Act to fight online gaming in the United States.

Meanwhile, any type of federal sports betting law seems unlikely to be passed anytime soon. Rep. Frank Pallone, chair of the House Commerce and Energy Committee which would been responsible for oversight over any such legislation, stated.  “We’re not interested in any federal regulation.” That means that the emphasis is on state-level implementation of the multi-billion dollar U.S. sports betting market. Pallone said that federal fears of regulatory and integrity concerns have been, for the present, assuaged by state governments.

Currently, sports bets are being taken in 8 jurisdictions and up to a dozen additional states will probably have the infrastructure running to accept bets by the end of the year.  Some critics say that, because there are no federal guidelines, there are too many different approaches, varied tax rates, oversight bodies and operation limitations. However, Pallone said that, by Congress’s standards, the system is working successfully.

A push for a federal bill came last year from Senate Majority Leader Mitch McConnell and Senate Minority Leader Chuck Schumer but neither senator has made a serious effort to advance the issue.

That hands-off attitude is fine with gaming operators and state-level officials, many of whom have been worried about an overreaching federal bill that could stifle the industry. Many of the leading sports leagues, however, would like to see a federal approach that would give them more of a stake.

The major professional sports leagues, together with the NCAA, have fought against legal sports betting for decades. Now that they’ve lost that battle, thanks to a Supreme Courtruling that gives states the authority to legislate sports betting within each individual state, the leagues are arguing that they deserve part of the revenue.

The leagues have had limited success in legislating, at state level, laws that would reallocate a cut of gaming revenues back to the leagues. The leagues have been hoping for a  federal regulation that would supersede the state law. Pallone sees the juxtaposition and is not impressed.

"They want federal standards, and want operators to pay for data. That’s totally bogus, in my opinion,” Pallone said. “That data is in the public domain. Nobody should be paying for that data."

The leagues are lobbying heavily for “integrity fees” which involve a slice of the gaming revenues. They say that some of the profits should go back to the sports groups. Opponents, including many elected officials as well as sportsbook operators, argue that there’s no reason for the leagues to demand money to protect the sanctity of competitions.  The “integrity fees,” critics say, are just a way by which the leagues could squeeze money from gaming operators (which would also reduce gaming taxes collected by the states).

The leagues have had little success in imposing integrity fees in statehouses. Now, they are arguing that there need to be data mandate requirements.  That means that, when taking bets, operators would be required to use only league-sanctioned data. Pallone told observers that Congress has no interest in