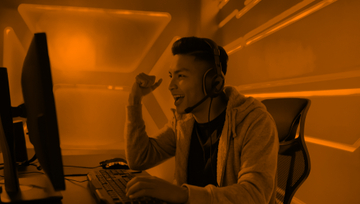 In 2016,  Eilers &Krejcik, a research and consulting firm, issued a report that projected that  by 2020, betting on major esports titles would bring in $12.9 billion. Analyst Chris Grove expressed surprise at the lack of interest on the part of Las Vegas casino sign up bonus properties to take advantage of the possibilities that this information presented, saying that casino executives were clueless.

Today, with traditional sports shut down, both land-based and online gambling operators around the world are taking another look at the esports industry and are open to the opportunities that it presents.

eSports is a term that refers to video game competitions. Many different types of video games are played in esports competitions – first-person shooters, console games, real-time strategy games and more.

eSports evolved in the 1980s. At that time the competitions would take place in arcades. By the ‘90s, with more fans and more players, the tournaments moved to auditoriums and large arenas. Today, thanks to players being able to compete in the tournaments remotely, esports has an edge in during the era of social distancing.

Even in online venues eSports matches can perform like an athletic sporting event including referees to officiate and competitors who follow the rules of the engagement. There are even sportscasters who provide running commentaries in real time. Plus, of course, the fans.

Many of the gamers are professionals. These competitors are sponsored by big tech companies. They practice dozens of hours every week so that they’ll be in top form when  they compete in professional tournaments. eSports tournaments generate revenue by selling online viewing subscriptions and tickets to live events. Winners go home with big cash prizes.

eSports in the Age of COVID-19

Sporting events may be cancelled or postponed by the coronavirus shut-down but esports tournaments are still viable and esports betting is taking the place of wagers placed on league games. eSports tournaments meet all the restrictions for strict social distancing since they take place online. In Nevada, the Gaming Control Board is allowing  sportsbooks to offer betting on upcoming esports events including the granddaddy of them all -- the League of Legends tournaments.

Brett Abarbanel, a director of research at UNLV’s International Gaming Institute says that unlike traditional sports, “esports are able to capitalize on a digital setting to continue competition,” and that’s allowing bookmakers to maintain their businesses.

Not only are punters betting on esports in states where it’s available --  Indiana, New Jersey, Delaware, Pennsylvania and Nevada offer legalized online betting – but in conjunction with already-running online casino options, it’s keeping casino operations running in those states.

Robert Rippee, Director of the eSports Lab at the International Gaming Institute    expects that casino operators will increasingly explore ways to expand their esports offerings. That will, he believes, draw them into online gaming. “They [operators] have the time to investigate it and see that there’s a strong consumer trend there that they can’t — and shouldn’t — ignore,” Rippee said.

Even before coronavirus hit, a number of casinos were considering how to integrate esports into their menu of ebetting options. In part, these casinos saw esports as a way to appeal to millennials who were bypassing both brick-and-mortar casinos and online casinos. Virtual and land-based casino operators saw esports as a potentially valuable asset that would draw in this demographic. Once the bookmaker establishes a solid presence with esports, bettors see the operator as one that offers the kinds of gaming activities that are attractive to them.

eSports operators are focused on assimilating into the U.S. gaming industry. Brett Abarbanel of UNLV’s International Gaming Institute qualifies his views on whether esports could be a lucrative addition to Nevada casinos. “It depends," Abarbanel said. They tend to not spend the kind of money on “extras” – entertainment, lodging and dining – that other casino patrons traditionally spend.

But Rippee is looking at the shutdowns which, he believes, could “be the perfect opportunity to turn a broader, more affluent demographic toward esports, including gamblers who have been itching to place a bet. People are looking to consume competitive entertainment — certainly in a betting environment — and there’s nothing else available.”

In response to those who think that esports betting will slump once live sports games return, Rippee sees the opposite. “People will discover new games to watch and new levels of competition,” he said. “I think it will still have some stickiness with groups of people.”

Seth Schorr of Fifth Street Gaming in Las Vegas says that he and others have been pushing to bring esports to Vegas for years. They started in 2015 with offers of cash tournaments and rooms that could accommodate traveling esport teams.  “We always looked at esports as an opportunity to grow,” Schorr said. Schorr’s vision wasn’t widely accepted in 2015 but he never abandoned the idea. Now, it seems, it’s an idea whose time has come. “It’s a slow ramp … (but) there is a Las Vegas strategy,” said Schorr. “We’re still figuring it out, alongside the esports industry.”

According to Abarbanel, the casino shutdowns may be just the ticket that was needed to bring esports to Vegas and other land-based casinos and draw more people to online gambling. “I would expect that incorporation of esports and video gaming into casino settings will get a refreshed look as gambling establishments reopen following the pandemic,” she said.

If the casinos continue to pursue esports betting, those efforts will continue post coronavirus shutdowns. “(Casino) demand will build slowly, so competitive advantage will come to those who find those unmet needs in new markets such as esports (and) video gaming fans,” he said.

Several companies have already been working on ways to build links between esports and traditional casino games. Strategies include offering CSGO slots games with 243 Ways to Win options and multiple paylines and VIP gaming options. Some of the casinos that have moved in this direction are Grande Vegas Casino, Thunderbolt Casino, Springbok Casino and SlotoCash Casino.

Most players agree that gambling and esports complement each other naturally. Even though Las Vegas casinos have been slow to take advantage of opportunities to wager on competitive gaming, it’s likely that corona will push esports as a feature at both land-based and online casinos in the near future.