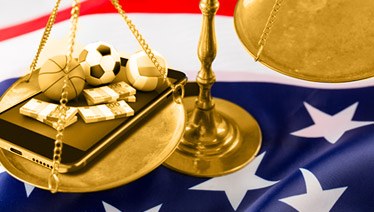 Will America change its anti-gambling laws anytime soon? That's the question that many people are asking as the Professional and Amateur Sports Protection Act of 1992 comes under fire for punishing people who engage in a voluntary act that can only adversely affect themselves.

Constitutional lawyers say that PASPA is unconstitutional. They point out that nothing in Article I, Section 8 of the constitution authorizes Congress to enact laws to prohibit what's viewed as "immoral conduct."  They note that delegitimizing alcohol (Prohibition) could only be effected with an amendment and that constitutionally, gambling stands on the same ground.

The question is especially relevant to sports enthusiasts who want to combine gambling entertainment with their sporting hobbies. They have been lobbying for a chance to PSAPA and many member of Congress agree that a change is due.  New Jersey’s Frank Pallone, ranking Democrat on the House Energy and Commerce Committee, is one of them. Pallone was quoted by ESPN as saying that federal gambling laws are "in desperate need of updating……We must ensure the laws are actually creating an environment of integrity and accountability, and include strong consumer protections. I plan to continue discussions with key stakeholders and then will introduce comprehensive legislation to finally update these outdated laws.”

Pallone's view is challenged by other politicians and even many sports leagues. They question whether there will be integrity, accountability, and consumer protection without federal interference. Some Republican congressmen and women have also introduced S.3376, a bill that is meant to reaffirm "the prohibition on funding of unlawful internet gambling." Other members of Congress are introducing a bill of their own, the Restoration of America's Wire Act, that is designed “restore the long-standing United States policy that the Wire Act prohibits all forms of Internet gambling.”

Congress  enacted Bill 474 in 1991 through the Commerce Clause. This "Bradley Bill" became known as PASPA. It outlawed sports betting in all states except for those which had allowed sports betting prior to PASPA -- Delaware, Montana and Oregon.  States in which licensed casinos had operated for the previous ten-year period were also exempted.

PASPA is favored by sports leagues including the NCAA and pro leagues including the NBA, the NFL and the MBA. They claim that, by taking sports betting out of the picture, players will be less likely to fall victim to bribery and blackmail that would cause them to throw games. They wish, they say, to preserve the integrity of the sport as a pure sporting event without worrying about the effects that betting will have on the teams.

Today private entrepreneurs and governmental representatives have begun to  advocate for the repeal of PASPA.  They say that, as the law is presently written, it's unconstitutional. New Jersey has taken the lead in challenging PASPA, even though the bill has been upheld in multiple District Court and Appeals Court hearings. Most recently the U.S. Supreme Court indicated they are prepared to hear arguments for striking down the bill on grounds of its unconstitutionality.

New Jersey is taking the initiative in challenging PAPSA. New Jersey and other states see sports betting as a source of potential revenue. The state has passed bills that would legalize sports gambling but both times the bills have been blocked in court by professional sports leagues and the NCAA. These organizations argued successfully that PASPA forbids legalization, In response New Jersey repealed its state prohibition against sports gambling which simply decriminalized the gambling. When the third Circuit ruled that this decriminalization was forbidden, New Jersey appealed to the Supreme Court which agreed to hear the case.

New Jersey will argue that, under the Constitution, the states are supposed to have a wide latitude in determining what is best for their citizens. If the Court takes the case, it could stop the erosion of federalism by holding in favor of New Jersey. Better yet, but unlikely, it could rule PASPA unconstitutional on the grounds that Congress lacks any authority to legislate with respect to gambling.

Sports law expert Ryan Rodenberg, an associate professor at Florida State, will focus his arguments on  the question of whether or not the pro sports leagues and the NCAA should have the enforcement power that PAPSA provides to them. He also is challenging the grandfather clause that allows some states to allow sports gambling while outlawing it in others. “Two PASPA-specific features — PASPA’s offloading of regulatory authority to private entities and PASPA’s unequal treatment among the States — raise constitutional issues,”

Rodenberg writes The argument is expanded by Ilya Shapiro and David McDonald. They write “If allowed to stand, this absurd loophole may have wide-ranging implications across many policy areas and poses a serious threat to what remains of state sovereignty.”

Laurence M. Vance addresses the implications of the case for other Vegas games, noting that “Although gambling – whether online, at a casino, or in an office pool – may be stupid, addictive, destructive, ruinous, a waste of money, a bad habit, a vice, immoral or sinful, it is not the job of government to prevent or discourage anyone from doing it.”

Sports gambling aficionados  feel that the concern about the outcomes of allowing sports betting don't justify federal or state law prohibiting the activity. Rodenberg and other New Jersey representatives are advocating for a narrow court ruling (based on the grandfather clause and the sports' organization's enforcement powers) but others are hoping from a more sweeping SCOTUS ruling.