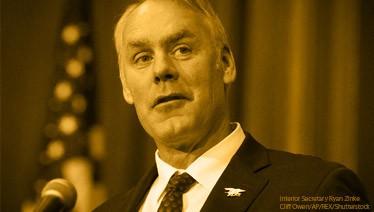 Former Interior Secretary Ryan Zinke’s decision to deny two Indian tribes authorization to open either a commercial casino or an online casino in Connecticut has led to a federal investigation based on allegations that Zinke lied to the investigators over whether he favored the tribes’ competitor, MGM Resorts. Prosecutors have begun to present evidence to a Washington grand jury which is probing the matter.

Grand jury proceedings are not public but anonymous sources have said that the grand jury is deliberating on Zinke’s decision to refrain from granting the request of two Indian tribes who want to operate a commercial casino in Connecticut. The issue at hand relates to possible influence that the MGM Resorts exerted on the issue.

The tribes, the Mohegan and the Mashantucket Pequot, sought to open a gaming facility in East Windsor Connecticut. Their competitor, MGM Resorts International, opposed the proposal and there are substantial allegations that Zinke acceded to MGM’s lobbying and denied the tribes’ petition based on political pressure.

The  Interior’s Office of Inspector General opened an investigation into the matter last year. Once they came to believe that Zinke was lying to them in the course of their inquiry they referred the matter to the Department of Justice.

To pursue a case against Zinke, prosecutors will have to prove that he “knowingly and willfully” lied, rather than simply misstated a fact.  Making false statements to federal officials constitutes a crime.  Zinke has denied any wrongdoing in the matter. “The Department of Interior should not take a position on any activity outside the reservation that is not bound by law or treaty,” Zinke said.   “I sided with a principle that I didn’t want to take a position on something that was off the reservation. I had multiple legal counselors’ opinions about what was legal. The investigators may not have liked my answers, but they were truthful.”

In 2017 the Mohegan and Mashantucket Pequot tribes sought federal approval to open and operate a commercial casino in Connecticut. The casino would not be located on reservation land which would obligate the operators to pay state taxes. The tribes had reached an arrangement with Connecticut officials that would have seen 25 percent of its slot revenue go to the state.

MGM, which operates a gambling complex in Springfield Massachusetts, just 12 miles away from East Windsor, sought to block the petition.  MGM’s objection was that the tribes would enjoy an unfair economic advantage.  In addition to its Springfield casino, MGM is also considering opening a casino in Bridgeport.

In the summer of 2017 officials at the Department of the Interior tentatively signed off on the tribes’ proposal. But in September the department handed down a definitive decision to decline the petition.

The Mashantucket Pequot and the state of Connecticut sued. The tribe questioned whether Zinke was improperly influenced by then-Sen. Dean Heller (R-Nev.), and Rep. Mark Amodei (R-Nev.)  who have both received contributions from MGM Resorts International.  According to the Center for Responsive Politics, MGM Resorts passed Heller $57,450 over a 5 year period between 2011 and 2016, making the company Heller’s second largest contributor.

Attorneys representing the tribes wrote in their filing that Heller called Zinke on Sept. 15, 2017, to pressure him to turn down the tribes’ casino application.

Zinke has already participated in two interviews with the inspector general about the matter.  He said that he resigned because of the investigations which, combined with “anger and hatred” from liberal opponents, was creating a poisonous atmosphere for the Department of the Interior. “If I had stayed, I would have become an angry person, and I didn’t want that,” Zinke said.

The grand jury is expected to continue its hearings over the course of the coming weeks. Sources say that witnesses were asked whether anyone influenced Zinke’s decision to turn down the Mohegan and Mashantucket tribes’ casino petition, Prosecutors have also asked Interior officials and other witnesses to describe the type of advice that they provided Zinke in the course of his review of the application.

Chief of staff of the Mohegan tribe, Chuck Bunnell, issued a statement saying, “I wish I could say I was shocked to hear that there might be a grand jury, and there might be investigations into political influence peddling. It’s extremely disappointing, but unfortunately, not shocking.”

Even as the issue of the Connecticut tribal casinos plays out in front of the grand jury, the state legislature is currently considering a bill that would make it possible for the Mohegan and the Mashantucket Pequot tribes to partner to build a casino in East Windsor from a state legislative point of view.  Presently, the Mohegan tribe has a compact but the Mashantucket Pequot tribe does not.  Both tribes must have a federal compact in place to operate a casino jointly.