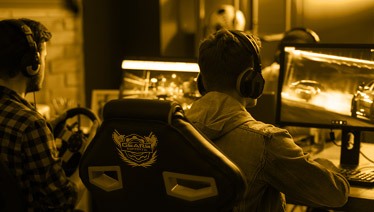 One of the newest and most popular of the Vegas games isn't taking place on the gaming floor. It's an esports competition that's running for an entire weekend at the Caesars Entertainment Studios in Las Vegas. Teams from around the world will battle it out in the Gears of War 4 competition at an event dubbed the GearsPro Circuit Las Vegas Open.

GearsPro Circuit Las Vegas Open brings the popular Gears of War game to Las Vegas for a competition that combines team collaboration with old-fashioned gaming rivalry. Players will be battling for a share of the $150,000 prize in front of thousands of fans. The event has quickly become a popular venue for gamers and spectators alike.

Gears of War is one of the most acclaimed video game franchises in history. The game focuses on JD Fenix and his friends, Del and Kait. The three survivors have just escaped an attack on their village and now they must rescue their family and friends.

Simultaneously JD, Del and Kait try to discover who the enemy is and how to best combat the threat of the subterranean reptilian hominids known as the Locust Horde and their mutated counterparts, the Swarm and the Lambent. Until last year the game was mostly played in teams of 4 online on Xbox or other gaming machines.

The competition involves role-playing as players choose a combat class to level up skills and deploy fortifications anywhere on the map against increasingly dangerous enemies.  The game is for social, competitive and professional players alike.

Gears of War at Caesars

Caesars, one of Las Vegas's largest and best known casinos, is bringing Gears of Wars enthusiasts together for a weekend of non-stop competition in front of thousands of in-house fans and viewers who observe on the esports live channel. During the Gears Pro Circuit, Gears Fight Night broadcasts will showcase some of the best pro and up-and-coming teams.

Gears Pro Circuit players vie for Gears Pro Points, which they can earn by playing in regional MLG Game Battles at weekly online tournaments, via online ladders and at live LAN events that are held around the world. Players achieve Gears Pro Points which are added to their teammates' points when they register for a tournament. The total number of points determines event seeding and travel coverage.

If you're aiming to attend the Gears Pro Circuit Program you'll need to familiarize yourself with the esports Code of Conduct in addition to the rules and settings. Then, you create an MLG GameBattles account that links your gamertag. Now you're ready to create a team, complete quests and submit your application to be considered for the Las Vegas Gears Pro Circuit Program event.

The Gears Pro Circuit weekend is divided up by events on Friday, Saturday and Sunday.

On Friday, the Las Vegas Longshot Markza Enforcer is available to claim during the broadcast. Once the player completes the quest the weapon is added to the gamer's inventory. The quests for these skins aren't available during the broadcast, only before and after the broadcast. Players can submit multiple entries when they watch every day to win the Xbox One S Console Bundle, the Xbox Elite Controller or the Brumak Funko Pop as well as other Gears esports Las Vegas Open Supporter Packs, Collection packs and other prizes.

On Saturday the Boltok Overkill EMBAR Retro Lancer is featured along with Dropshot weapon skins. Players complete the question and the weapon will be added to their inventory. Again, the quests for these skins take place before and after the broadcast. Prizes include Gears of War 4 Limited Edition Xbox One S Console Bundles, Xbox Elite Controllers, Delta Squad Funko Sets and Gears esports supporter and collector packs.

Sunday is Mixer Lancer – gamers can claim a Mixer Exclusive Lancer weapon skin during the Grand Finales when they complete the question and receive the weapon into their inventory. Claiming this skin is accomplished on the Mixer Channel. Gamers have the chance to claim  limited edition  Las Vegas Torque Bow, Boomshot, Hammerburst weapon skins during the broadcast. Game prizes include Gears of War 4 Limited Edition Xbox One S Console Bundles, Xbox Elite Controllers, NVIDIA GeForce GTX 1080 Graphics Cards and Gears Esports Supporter Packs.