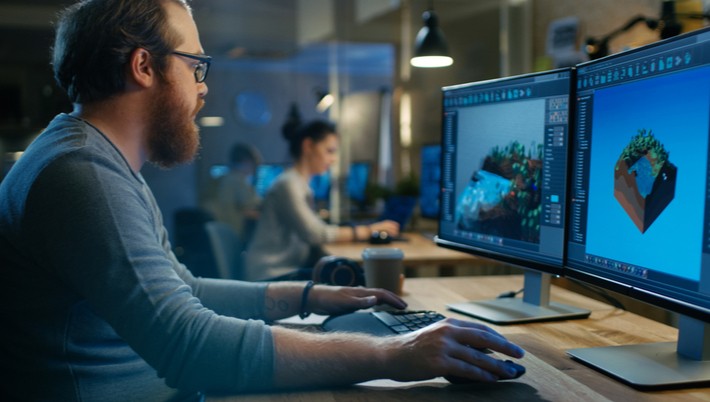 Roblox is an online platform where users go to play games. Roblox itself isn’t a game – it’s a site that facilitates gamers’ ability to play games made by other developer. So when you want a break from your fav online casino, just go make your own game.  It’s similar to the Steam storefront but with Roblox, all of the featured games are made by Roblox users. To date over 40 million games have been published by users on the Roblox platform.

Roblox game-making isn’t only for fun.  There are no no deposit bonus codes but creators can make money by monetizing their games. Roblox itself along with all games published on the Roblox platform are available for free. Creators make money purchase and spend Robux – Roblox’s virtual currency – on game items. Developers keep part of the proceeds as Robux and when the developer has enough money s/he can exchange the Robux for real money.

The success of Roblox is due to the fact that anyone can bring their game ideas to life on the Roblox platform. It’s suite of game-making tools provides everything needed for anyone to bring a game from concept to completion for both single-player and multip-player gaming options.

To create a game on Roblox you need to learn the Lua scripting language. There is a learning curve but it’s easier to learn than other programming language. There’s no need to set up a server or worry about any other logistics since once the game is made it can be offered to the Roblox community through online multiplayer. The Roblox platform supports all sorts of different types of games from first person shooters to role playing, real time strategy, puzzles, sports, simulators  and multi-player online battle arena games.

There are developer forums where users can troubleshoot and learn new skills.

Roblox was founded in 2006 but for most of its history it was relegated to the “children’s games” niche audience. By the 2020 pandemic lockdowns, when people were stuck at home looking for things to do, Roblox’s time had come to fly. People, especially kids, had time to learn the Lua language and bring their game ideas to life. Many parents and educators also saw the challenges that Roblox game creation presented as being a positive educational opportunity. Roblox went public in April 2021 and there are now tier 2 Roblox game studios to further the company’s recognition.

One of the things that Roblox creators and gamers like about the platform is that it’s instantaneous. You don’t need to boot it up in the same way that you’d boot up a regular video game. You access the worlds via a webpage on your Internet browser.

You can scroll through the current listing of popular games or find a game via a search term. You pick the world that you want to explore similarly to navigating a social media app.

Roblox is, in fact, a type of social media app. Every player and creator has a profile and a friends list and enjoys immediate access to whichever game s/he chooses.  The social media aspect extends to the ability of multiple people to work on a project together – each in front of his or her computer from any area of the world.

Simultaneously, one person might be importing 3D objects, a second could be working on scripting events and a third can be terraforming the landscape with river beds and mountains.  Many creators enjoy the process of creating the games even more than playing them.

The Roblox Toolbox is an online repository of 3D objects, mainly created and uploaded by the youngest of the Roblox creators. Creators can download them to use them in their own games or create their own.

Some of the Top Roblox games include:

MeepCity is an open-world game that takes about 45 minutes per session. Players role-play a character as it interacts with other people. The player customizes his/her character’s look and then hangs out with other characters. The goal of the game is to collect small creatures. While you do that you build a house, fish, play games and earn money.

The character moves through various locations which are laid out like an interconnected shopping mall. The characters can work as a doctor at the hospital or as a teacher at the school. You can eat ice cream at the ice cream shop, go clubbing at Club DJ, have parties, host events and more.

Jailbreak is a traditional cops and robbers game where 3 teams – police, prisoner and criminal – struggle to gain the upper hand. This isn’t a light-hearted game -- tools include a pistol, handcuffs, a taser, spiketraps, helicoptors, rocket launchers, weapons shops and more.

There are escape routes, in-game items and weapons, vehicles, locations, badges, easter eggs, safes, weapons and keycards in this game. If you’re a prisoner you focus on getting out of your cell and through the gates without the cops seeing you. Once you get outside you take off in the getaway card and then hook up with the local criminals. As you go from step to step you keep your eye on the goal of getting into the helicopter so that you can start robbing.

If you’re a cop you need to keep the prisoners from escaping but you can’t kill or handcuff too many innocent people or you’ll end up in jail too. You also want to arrest escapes so that you can collect the bounty.

Whether you’re a prisoner or a police officer, your ultimate goal is to stay alive!

Adopt Me! may seem like a child’s game but there are plenty of adults who have become enthralled by the sweet, light-hearted game as well. Once you enter the game you can choose an avatar, change clothes and set up the house. The game really starts moving when you adopt a pet – an egg that represents the baby that must grow to adulthood.

It seems incredibly simple but it’s one of Roblox’s most downloaded games so it’s clear that the simple gameplay draws in both kids and adults.