How Can You Play Poker at the Online Casino? 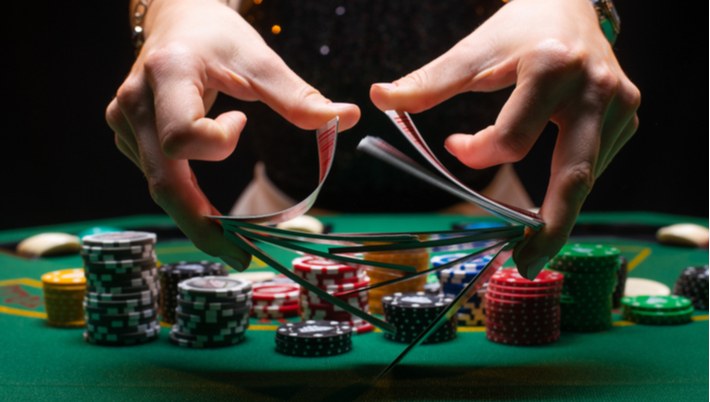 Poker is one of the most popular games at any casino. The poker table is almost always crowded with players and observers who love watching how players outsmart the dealer in this gaming adventure that combines skill and luck.

Learn about this fun-filled game including about the most exciting Vegas casino online poker variations. Check out the games at the online casino where you can play for free in the Free Mode or for real money prizes in the Real Mode!

Many historians believe that poker originated in China where a 10th century emperor popularized it. Other researchers claim that poker can be traced back to the 16th century Persian card game “As Nas.”

Poker arrived in Europe in approximately the 17th century and was then known as Poque. It became popular in France and Germany and involved three cards which were dealt to each player who built their hands while bluffing in order to maximize their bets.

French explorers brought poker to America and today, film-goers recognize poker as the game that was played in salons by ranchers, cowboys and other early settlers of America’s Wild West who adopted features of the early game and created the five-card game.

Poker remained popular in America and regained popularity in Europe after Queen Victoria expressed interest. Casinos of the French Riviera incorporated poker tables onto their gaming floors and when James Bond started playing in the Bond movies of the ‘60s, poker was cemented into casino culture as a game of the elite and VIP casino patrons.

The basic game of poker, called 5-Card Draw, is relatively simple. Each player receives 5 cards and places a bet based on his/her prediction of what kind of hand s/he will be able to build. The goal is to build a hand that is as high in value as possible.

After the cards are dealt and the first bet is made, every player has the opportunity to exchange as many of the cards in his/her hand as s/he wishes. Then, a second bet is made and everyone opens their hand to check the results. The hand with the highest value wins.

There are two advantages of playing poker online. One is that, unlike playing poker at a land-based casino, playing poker online involves no minimum table limit. That means that you aren’t limited to betting over a specific amount in order to play. You can play for high stakes, low stakes or, if you want, for free.

Secondly, the online casino offers a variety of poker variations so you have the chance to try some different poker techniques and styles. Some of the most popular of these variations include:

All American Poker is a favored poker variation worldwide, not just in America. The variation involves a lower payout for Two Pair and Three of a Kind and high payouts for ranked hand. A straight-flush is a goal because it pays out very well.

There are no wild cards in All American Poker and the game pays out on pairs of Jacks and higher plus two pairs, three-of-a-id, straight, flush, full house, four-of-a-kind, straight flush and royal flush. On the deal the player is dealt 5 face up cards which s/he can hold or discard as s/he wants.

The highest hand that you can achieve in Aces and Eights poker is one with black aces and black eights plus an unknown hole card. The game will forever be remembered as the poker game that Old West folk hero Wild Bill Hickok, a lawman and a gunfighter was playing when he was murdered.

Rules of Aces and Eights poker involve deals of five cards up. After the deal, the player must decide which cards to hold and which cards to trade. After that draw the final hand is evaluated against the casino’s paytable and the payout is conducted accordingly.

Many players prefer Aces and 8s because the payout potential is relatively high when compared to other games.

For most of the game, Bonus Poker is played similarly to regular poker. Five cards are dealt and players bet on their predictions of the hand that they believe that they can build. The higher the poker hand ranking, the higher the payout. The Royal Flush is the highest paying hand.

However, the lowest ranked poker hand in Bonus poker is a pair of Jacks. In addition, there’s a higher payout on a hand with 4-of-a-kind than in other games. Finally, 4-of-a- kind 5s through Kings pay out less than 2s-4s. Four Aces pays out over three times the normal rate.

Regardless of whether you prefer classic poker or a poker variation, you can enhance your casino experience with some poker play!