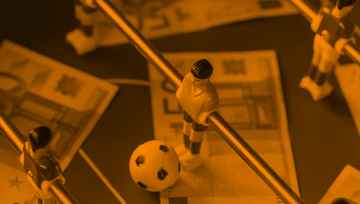 Criminals have always been attracted to any activity in which money is involved and the multi-billion dollar sports betting business is no exception. The internet has made it easier than ever for criminal gangs to bribe referees and pay off players, thus fixing matches and walking away with millions in online casinos sports bets wins.

In 2009, observers identified how Bulgaria’s leading teams and top division had been hijacked by crime syndicates. The local Oligarchs rigged the results of almost every match played.

The observers, many of whom were based inside the U.S. Embassy in Sofia, wrote in a cable, "The most common match fixing schemes are bribing referees and paying off players on the opposing club to insure a team loses by a certain score….the mass firing of the referee selection commission for a second consecutive year’ hasn’t exactly improved fan trust in soccer results, with games characterized by ‘illogical results and unexplainable play’."

The State Department went on to accuse certain teams with colluding to decide which team would win even before the first kick. FBI investigators alleged that Oleg Nikolaenko was responsible for much of these game fixes.

Nick Woodbridge, the lawyer who represented Nikolaenko, identified an interplay between older Internet scams and newer scams that involve gambling sites pitched at sports games. Woodbridge has become something of an expert in the subject of match fixing, sports-relevant cyber crime and safe sports betting.

Woodbridge feels that the modus operandi of the sports cheat is the same as it always was.  Basically, nothing has changed but the techniques have evolved. This is logical as the scale of threat posed by online betting and other cyber crime has grown exponentially. At one time, fixing a bet meant giving a referee an envelope of hard currency. Such financial inducement often determines the final score to this day.

In other situations, other methods may also apply --  coercing players, making last minute substitutions. Now cyber crime poses an additional threat. The actual result of a sports game is semantic to cyber-criminals. They don’t need to fix a game – it’s easier to dupe a gambler to bet on a (rogue) website. That way, even if the bettor wins, the people running the site can  refuse to make the pay-out or they can charge an extortionate percentage of the win to make that pay-out. There’s no need to fix a match when the criminal just takes the winnings anyway.

Role of the Government

Weak governments who shelter organized crime facilitate the ability of criminals to perpetuate their activities. Countries such as Albania, where the laws are weak and gangs are in cahoots with government officials, illustrate how easy it is for people to fix sporting events with international repercussions.

In 2018 the UEFA brought charges against Albania’s top team, the F.C. Skenderbeu, which illustrated how match fixing had infiltrated the government. The European soccer Association’s Betting Fraud Detection System flagged over four dozen fixed features over the course of 8 years and fined Skenderbeu €1 million Euros. They also imposed a 10 year ban on any international competition for the team. Ridyan Bode, a member of the Albanian parliament and an associate of Prime Minister Sali Berisha, was implicated.  Bode was Barista’s Finance Minister and the incidents took place when Albania was a member of NATO.

Of particular concern was how Albania’s then government loosened gaming laws, allowing gaming to become a core component of corporate crime. Bode had privatized the country’s lottery which led to Bode’s links to Austrian online betting companies. Allegedly, Bode sold the state lottery to an online betting company at below market rate.

Even the Italian Mafia got in on the action. The Mafia found that Albania was a favorable place from which to operate online gaming companies. This, in turn, impacted Albania’s corporate ties to money laundering, as the proceeds of crime could be laundered through online gambling.

After laws tightened in 2018, many technologically-adept Albanians had developed the capability to make crime in the gaming sector work for the gangs involved. As for Bode, he is now a Governor of the National Bank of Albania.

One thing that might help mitigate the cyber sports betting crime would involve finding more people who would be willing to report fraud when they experience it. Complaints about cyber fraud is often dependent on social nature of betting. Some researchers speculate that, since sports gambling is such a social activity, people feel that they will lose face among their peers if they tell them that they are a victim of fraud or have been cheated.

Also, the amount lost is often rather small, making victims of sports betting fraud believe that it’s not worth their while to report what happened.  Yet even a site that takes small bets can steal millions of dollars after only a few games with small bets. There’s a sense that, if someone is gaming ‘socially,’  they can probably afford to lose that money anyway. Players feel that judgement and are thus less likely to report being victimized by a fraudulent site.

Many analysts say that Eastern and Central Europe are incubators for electronic gambling, and its manipulation. The reasons for this are twofold:

The region has a large population of young people with extremely high competence in the maths, sciences and physics. Also, there aren’t many good employment opportunities in these countries so it’s easy for a smart young tech-savvy student to be lured into illicit activities. Finally, established criminal networks operate almost freely in these regions.

Sports gamblers who want to bet online should use only licensed and regulated online gambling platforms. Unregulated platforms can “void" a player’s winnings for no reason, use rigged software or deceive bettors with terms and conditions that are nearly impossible to fulfill. Unregulated sites also levy large withdrawal fees in which the total amount of a player’s winnings are reduced.

Sports gamblers can protect their interests by betting only at regulated sites which are licensed and under the supervision of a recognized authority. International agencies create and enforce regulations and licensing requirements and verify the accuracy of the software and equipment.