Into the Future with Caesars Entertainment 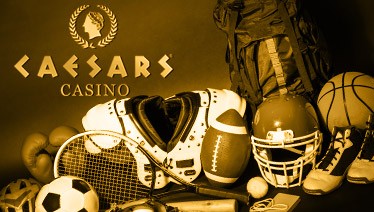 Caesars Entertainment Corporation is fully embracing the new connections between the casinos and sports with new partnerships that promise Caesars’ patrons full access to all the best in sports networks.  Someday soon, Grande Vegas online casino may also have a sports book, then we'll invite all our casino players to also enjoy our own.  But until then.....

A few of the new joint ventures on which Caesars is embarking include:

Caesars has partnered with the NFL, indicating (as if there was ever any doubt) that the NFL is throwing its efforts into becoming a major player in the new sports-casino landscape.

2019 started off with the news that the NFL had selected Caesars Entertainment as its first-ever casino sponsor. Caesars is the first gambling operator to receive such a designation in a deal that was announced just in time for the 2019 Playoffs.

The NFL’s press release stated, carefully, that the partnership only relates to Caesars’ casinos and excludes Daily Fantasy Sports, sports betting and hotel promotions. It does signal that decision-makers in the NFL have accepted the idea of sports betting and are examining ways that the league can get a piece of the action.

The deal means that Caesars has the rights to use NFL trademarks in both the UK and the United States. Caesars will display NFL branded items at their more-than-four-dozen properties. Future NFL Drafts and events could also be featured at Caesars Casinos.

The partnership was valued at $30 million-per-year. The deal permits usage rights at locations that don’t feature sports wagering and does not allow Caesars to use NFL branding on any sports betting products.

NFL senior vice president Renie Anderson explained “We’re not rushing into anything. We’ll continue to look at the industry as it evolves but it still has a lot of evolving to do.”

Observers, however, expect that the NFL will move into the sports betting arena in the near future. They note that the NFL now has a relationship with an established casino brand that will allow it to make that transition easily when it’s ready. Recently, the  American Gaming Association reported that once the NFL moves into a sports betting partnership they could expect annual revenue in excess of $2.3 billion. In the 2016-2017 season, the NFL reportedly earned $1.25 billion in sponsorship revenue. Total revenue for that season hovered at approximately $14 billion which was split between the league and the 32 NFL teams.

Caesars CEO Mark Frissora said in a statement that by partnering with Caesars, NFL branding will be immediately accessible to a massive audience which can access exclusive year-around NFL opportunities at the company’s 50= US properties. NFL Commissioner Roger Goodell aims to increase league revenue to $25 billion by 2027.

The deals come following the US Supreme Court’s May 2018 decision that overturns the Professional and Amateur Sports Protection Act (PASPA). The ruling legalized sports betting and, almost immediately. three of the country’s biggest leagues (NJL, MLB and NBA) partnered with MGM Resorts International.

The NFL is the last league to create such a partnership, in part because of its long-standing opposition to sports betting. While the other leagues opposed sports betting as well, the NHL was the most vocal in their opposition to legalized sports betting because, they said, of the effects that it could have on the integrity of the game. That could be changing, though indications are that the changes will evolve slowly.

Some individual NJL teams have made their own deals -- the New York Jets secured a partnership with MGM and Oakland Raiders partnered with Caesars Entertainment. Caesars also has partnerships in place with the Chicago Bears, Indianapolis Colts, Atlanta Falcons, Baltimore Ravens, Philadelphia Eagles. And New Orleans Saints.

Caesars and the Oneida Indian Nation to Partner in NY

Sports betting is not live yet in New York but a group of the state’s tribal casinos has announced sportsbook plans. One of those is the Oneida Indian Nation which announced that it is planning to partner with Caesars Entertainment to operate sportsbooks inside three New York Casinos. Plans are subject to NY sports betting regulation passage and the approval of the National Indian Gaming Commission.

New York has not yet legislated sports betting in the state but state assemblyman Gary Pretlow is planning to reintroduce his sports betting bill in January. Pretlow believes that the fact that neighboring New Jersey is making a killing in sports betting – whose revenue, in a large part, comes from New York residents – will convince the NY State Assembly to pass the bill.

The Oneida-Caesars venue would not be able to start a sportsbook operation until the legislature passes such a bill and until the NY State Gaming Commission issues regulations that give them guidelines that would allow them to proceed.

If Pretlow’s bill succeeds the state would allow sportsbooks to operate at the state’s brick-and-mortar tribal casinos and racetracks. It would also make New York one of the nation’s first states to allow mobile sports betting.

Caesars Entertainment EVP of Gaming and Interactive Entertainment Christian Stuart said “We are eagerly awaiting the National Indian Gaming Commission’s review of this innovative new partnership involving a licensing and branding arrangement. The Oneida Indian Nation has already established Turning Stone as the preeminent New York gaming destination, which makes the property and its sister casinos fitting partners for Caesars. When it comes to partnerships, Caesars seeks collaborators who share our commitment to exceeding guest expectations, and we are confident that “The Lounge with Caesars Sports” at Turning Stone, Yellow Brick Road Casino and Point Place Casino will be a top sports betting destination in New York.”

Ray Halbritter CEO and representative of the Oneida Indian Nation also commented, saying “When it comes to sports betting, Caesars is in a class of its own. We are pleased to be joining forces with this world-renowned gaming leader. Like Oneida Nation Enterprises, Caesars has built its business on exceptional service, as well as a dedication to constant innovation. These shared values create the perfect synergy for a meaningful long-term partnership.”

In a statement provided by the Oneida Indian Nation, once the sportsbook launches, the Oneida-Caesars plan will enable “global gaming leader Caesars Entertainment to bring sports betting to Upstate New York with a licensing and branding alliance. The Lounge with Caesars Sports will open at Turning Stone Resort Casino, Yellow Brick Road Casino and Point Place Casino in 2019.” All three of these tribal casinos are close within an easy driving distance of Syracuse.