Is Online Poker Making a Comeback? 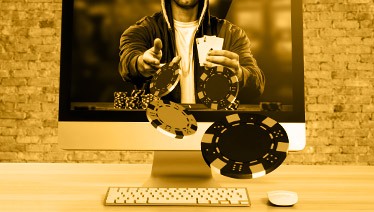 Poker enthusiasts and casino enterprises have been attempting to offer poker-style Vegas games to online players for many years. The legal standing of online poker was murky but now it seems that more gamers have more opportunities to compete in poker online. The increase in players, as well as the increase in featured online poker variations, is good news for the online poker industry in America which believes that the game entertainment will soon start to experience a resurgence.

The legality of online gambling, including poker gaming, is – at present – unclear for U.S. players.

Online poker was available in the United States as early as the 1990s and many online poker sites were set up to offer games and entry to real life tournaments. ParadisePoker was one of the online poker industry's first and largest cardrooms. Other sites followed including PartyPoker and EmpirePoker.

In October 2006 the Unlawful Internet Gambling Enforcement Act (UIGEA) was passed which made it illegal to "place, receive, or otherwise knowingly transmit a bet or wager by means of the internet where such bet is unlawful under any law in the State in which the bet is initiated, received, or otherwise made."

UIGEA effectively outlawed online poker and sites such as bwin, PacificPoker, PartyPoker and others were forced to close.

In 2011 the US Department of Justice seized the domain names of PokerStars, Full Tilt & Absolute Poker which effectively froze the bankrolls of their player base. Full Tilt was accused by the DoJ of acting as a Ponzi scheme and scamming players out of $300 million. On the other hand, PokerStars paid $1 billion in fines immediately.

Nevada introduced the nation's first legal online poker site in 2013. Some critics expressed concerns that the site contravened the Federal Wire Act which bans betting across telecommunications lines. Proponents argued that the site didn't promote gambling according to the traditional definition since poker is viewed as a game of skill (assessing whether the player sitting across from you is holding a winning hand or is bluffing) and that assessment isn't part of online poker.

Other concerns involved worries that regulators wouldn’t be able to prevent residents of other states or people younger than 21 from playing the online version of the game. The Nevada law remained on the books but poker sites didn't see the kind of traffic that they expected. Some of the first sites – Ultimate Gaming (an offshoot of Station Casinos) and Ultimate Poker (an affiliate of Caesar's Entertainment Corp) posted disappointing early statistics and some even closed down. The dearth of players was citied as the main reason for players' disinterest.

Delaware got the ball rolling to bring poker to more online gamblers when they legalized online poker play in 2013 for Delaware residents and New Jersey did the same shortly thereafter. But the problem remained – there wasn't a big enough group of players in any one state to make the competition compelling.

In February 2014 Nevada initiated an online interstate poker contract which enables gamers in each of the three participatory states to compete against each other. There are regulations that spell out the rules of play when there are differences between play rules of participating states and contracts that identify exactly how winnings will be taxed.

Increasingly, states such as New Jersey have been aggressively pursuing online gaming opportunities for their residents and visitors. New Jersey has been leading the movement. The state presently hosts five online poker sites including Caesars’ wsop.com. The first games involving New Jersey players against Nevada gamers have begun and a tournament has been scheduled for late May.

The federal government seems resigned to having online poker sites and other online casinos operate within the United States. The issue was tested in 2011 when the Department of Justice took three online poker companies to court, charging them with violating US laws that prohibit the acceptance of any financial instrument in connection with unlawful Internet Gambling.

In US v. Scheinberg et al the indictment alleged that the companies used fraudulent methods to evade UIGEA (for example, by investing money in a local bank in return for the bank's willingness to process online poker transactions  and by disguising online gambling payments as purchases of merchandise).

The companies argued that poker involves skill rather chance so therefore online poker is not unlawful Internet gambling. Two of the three companies settled  with the Manhattan U.S. Attorney for $731 million though they didn't admit guilt and were not convicted.

Following this PokerStars began to operate legally in New Jersey.

Playing Interstate Poker is, at present, limited to residents and visitors in Delaware, Nevada and New Jersey. There are some logistical issues, not the least of which is the differences in time zones that keeps East Coast players up late at night to meet Nevada players' hours.

Players in all locales should enjoy the benefits of larger prize pools. The Interpoker champs can also compete to join the Nevada World Series of Poker.

Observers believe that Pennsylvania, which is becoming a gaming market force, may be the next state to strike a contract and join the InterPoker activity. California and New York may also get in on the action in the near future, bringing Internet Poker into a new era with new opportunities for all.