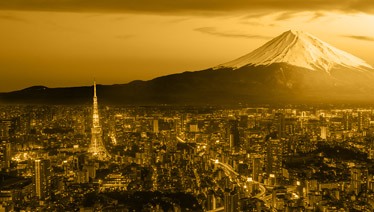 For many years Japanese travelers and businesspeople have formed a sizeable percentage of the gamblers at Australian, Singapore and Macau. Now the Japanese government is preparing to allow casinos to open in Japan and American casino operators are falling over themselves in their enthusiasm over the opportunity to enter this potentially lucrative new market.

The rush started with the Las Vegas Sands which brought British soccer star David Beckham and Eagles guitarist Joe Walsh to Tokyo to promote the casino for Japan. MGM Resorts has also expressed interest in expanding their casino empire to Japanese shores. Both MGM and the Sands have indicated that they would be willing to invest as much as $10 billion in building casinos in Japan. Robert Goldstein, president and chief operating offer of the Las Vegas Sands, said in an interview that “We’ve been trying to come here for many years. It’s got huge appeal internationally…..It’s a very large gambling opportunity.”

Until recently it was illegal to operate a casino in Japan but that changed with the recent Integrated Resort Promotion Law which was passed last December. Now resorts will be allowed to integrate casinos into their entertainment facilities where there is an international conference hall and a hotel. Most observers expect the new resort hotel-casinos to be built in Yokohama and/or Osaka, Japan's second- and third-largest cities.

Not everyone is enthusiastic about the impending arrival of legalized gambling in Japan. The JiJi news agency found that two-thirds of Japanese citizens are opposed to the introduction of casinos. Most are worried about the expected increase in compulsive gambling and crime. They point to the correlation between the popular game of Pachinko, a pinball-like slot machine game that is popular throughout Japan, and organized crime – including money-laundering.

Prime Minister Shinzo Abe’s government pushed for the passage of the Integrated Resort Promotion Law. They argue that casinos will help boost Japan’s economy by promoting tourism, bringing revenues from the casinos into the Japanese society through taxes. Many financial observers say that the country’s gambling business could soon overshadow Singapore's casino industry which is estimated to be worth an annual $7 billion. Estimates range from revenues of $10 billion - $23 billion per year, starting in 2023 when the resorts are scheduled to open.

In pursuit of a deal MGM Resorts hired Jason Hyland, former deputy ambassador in Tokyo, as its president for its Japanese interests. Wynn Resorts' Steve Wynn commented that Japan was a “perfect” market because of its size and wealth while Chairman of MGM Resorts International, James Murren, said that “Japan can be a bigger market than Las Vegas.

One of the biggest players in the casino world is Sheldon Adelson, chairman of Las Vegas Sands which invested $6 billion in a Singapore casino resort. He has called Singapore a “warm-up” for Japan.“I turned Singapore into a city for conventions and shopping. [I did] the same thing for Vegas,” Adelson said. Adelson has met the governor and mayor of Osaka and conferred with the secretary general of the ruling Liberal Democratic Party.

One of the gambling operators' biggest concerns is that the Japanese government will overregulate the industry. Already the government is considering limiting the size of the gambling floor in each resort, banning ATMs in the casinos, and requiring Japanese citizens to pay fees of as much as $100 to enter casinos in Japan and use only cash to buy chips (foreign citizens will be allowed to use credit cards).

The casino operators are trying to limit these restrictions but will likely agree to anything that the Japanese government legislates. "We will be glad to take it,” said the Las Vegas Sands' Goldstein. “We’re just very eager.”