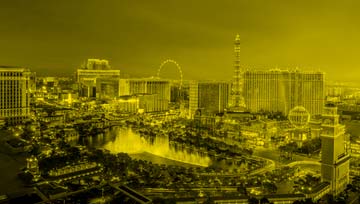 While our own Grande Vegas Casino is popping with excitement and forever adding new games and promotions to add to the fun of our players, real casinos in Vegas are showing some slipping numbers.  Causing worry for the casino industry, let's look deeper.

Following a good summer season, Las Vegas casino operators are now struggling in a declining economy The decline might be a blip on the screen or it may signal the start of a more serious recession for the Vegas and online casino industry.

The latest reports signal soft numbers, including declines in RevPAR. Revenue per available room is the most commonly used metric to assess how Las Vegas casinos are performing. Strip RevPAR is down and overall visitation to Las Vegas and room occupancy are also low, though not as far down as RevPAR.

Convention attendance also declined towards the end of 2018. That’s particularly worrying to Strip operators. Convention guests don’t gamble as much as other visitors but they spend significantly more on rooms and dining.

The news is causing casino stocks to fall as investors fear that Las Vegas has finally pushed its luck too far. Casino expansion means that today, throughout the United States,  there are betting venues and casinos that are within a closer proximity to the majority of Americans than Las Vegas. It’s true that the city’s resorts have reinvented themselves as places to shop, drink and eat along with gambling but everyone is asking the same question – is it enough?

There are additional reasons for the decline, observers say, above and beyond today’s easy accessibility of gambling around the United States. Resort fees (the fees that resorts charge for “extras” such as WiFi and access to the pool and gym -- fees which must be paid by all guests, regardless of whether or not they use those facilities) have skyrocketed and paid parking is the name of the game throughout the city.

Players are also more aware that the game odds increasingly favor the casino and the house edge, for many games, is growing. Coupled with the minimum table bets – the minimum that a gamer must wager to play many of the table games – more and more players are deciding that a visit to Vegas isn’t worth the time, cost or effort.

Some analysts note that they’ve been saying, for quite some time, that the incremental charges and inconveniences that have crept up on Vegas visitors have eroded the value proposition of a Las Vegas visit for many former guests, including those who once loved visiting the city. They say that they can’t really gauge the impact that the fees and inconveniences have on people. But, they say, it’s hard to imagine how such factors could do anything but turn people off.

International travel to Vegas has declined in recent years, even though travel worldwide is up.

There are a number of possible reasons for this – the growth of the casino industry in Macau and in other areas of Asia, the threat of a China-America trade war and other frustrations that make coming to Vegas a less-attractive proposition to foreign travelers.

Vegas has weathered slumps in the past and the casino operators believe that they will weather this one as well by offering new entertainment options. For instance, when too many new casinos opened in the city in 1955,  Las Vegas built its Convention Center. That prompted a broader shift to business travelers who would bolster mid-week occupancy.

Again, when the late ‘70s / early ‘80s recession hit, casinos shifted their focus to middle-market players and pulled back on their offerings to high rollers. Similarly, casinos started to court casual players in the ‘90s when the marketed demanded such a shift. RV parks and other family-friendly venues were built and a new family-friendly trend emerged.

In the early years of the 21st century, as the dot.com bubble burst, nightclubs became the new Vegas and by the recession of 2008, the city was moving towards attracting international gamblers. Now the casinos are focusing on new entertainment and restaurant offerings while the future seems set to include major sporting events at the new T-Mobile Arena  -- Vegas now even has a home team, the Golden Knights – to cheer on.

Observers are watching to see where the trend is heading in 2019. There are concerns that Las Vegas is in for a rough ride. Some analysts think that the recent slump doesn’t really signal a trend since the economy’s low unemployment and high consumer confidence generally translate into higher earnings for Vegas casinos and that the city will bounce back quickly.

Several casino operators have begun to respond to the numbers. Wynn is validating parking for its guests and other resorts, including Caesars and MGM, have begun to offer discounts on add-ons and other promotions to attract more visitation. Room fees, a source of frustration for many guests who resent paying up to $50/day in added accommodation fees, have been waived at several resorts.

Online travel agencies rank hotels from most expensive to least expensive based on advertised room price -- not on the total cost which includes fees and taxes.

The hotels pay the online travel agencies their commission based on the room price only and not on the resort fee. Commissions paid to agencies like Booking, typically run between 10 and 18 percent so the additional fees, which are not included in the base price, are very lucrative for the hotels.

Even though research shows that there’s no correlation between such fees and numbers of guests coming into the casinos, casino hotels such as the Circus Circus and the Rio are slashing fees on “extras”. The fees are charged to all guests, regardless of whether they use the services, but the no-fee promotions will, the casino hotel operators hope, create more of an air of friendly accessibility that will bring in more guests. Resort fees can increase the price of a room as much as 100 percent at select hotels.

Vegas has faced adversity before and has succeeded in reinventing itself over and over again. There’s no reason to believe that this won’t be the case today.