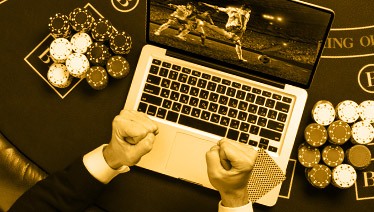 Legalized online casino sports gambling will change how fans experience live sports.  That’s the opinion of almost everyone involved in the sports world today though no one is yet sure how that might happen. Players, league owners, and others think that, in a short period of time, sports aficionados will start viewing sports betting as just one more type of casino-style gambling.

For many years American sports leagues resisted the idea that gambling of any sort should be allowed on sporting events. Match-fixing, point-shaving and other scandal worries kept these leagues and decision-makers on the “nay” side of sports betting. However, with the May 2018 Supreme Court ruling that opened the door to legalized sports betting, attitudes started to change and, with that, the way that sports fans interface with their status as sporting events observers.

Other than in Nevada, American sports gambling is still in its infancy. But as more and more stages adopt sports betting, and more and more fans integrate wagering into their viewing entertainment, betting on games will become more widespread.  The practice could bolster teams and leagues and even change the way that all fans, even non-gamblers, engage with the action. Sports betting could potentially intellectualize the games, transform arenas and add statistics and data used in each sport.

Ted Leonsis, who owns seven professional sports teams including the NBA’s Wizards and the NHL’s Capitals, believes that the lure of sports betting will allow arena owners to transform their stadiums into huge entertainment centers where crowds will gather 24/7 to bet via high-tech sportsbooks while they eat, drink and relax. Screens, which would be located throughout the arena, could broadcast sporting events from around the world throughout the day and night while betting windows would be open to accept bets.

Moreover, in addition to the traditional win/loose and point spread bets, the sportsbooks would accept prop bets and even in-game wagers.

Leonsis says that, in such a venue, fans will be able to wager on specific plays nearly in real time. Will the team score on the pending power play? Will the player make the next free throw?  There will be a line instantly and fans will be able to make their bets on the game as it unfolds with a couple of taps. Fans will stay engaged at the times when the action lulls or when excitement wanes.

Leonsis calls his vision the “gamification” of sports where fans become interactive participates in the competition via their bets. “I try not to call it gambling. Gambling to me sounds like rolling the dice, not knowing what the outcome is,” Leonsis says. “And gamification, powered by big data, you have all of the information that you need to make a very, very reasoned decision.”

Such a scenario isn’t so far-fetched. Charlie Ebersol, who is trying to create a new football league, recognizes the opportunity. He hopes to engage fans in a way no American sports outfit ever has. Ebersol feels that other leagues aren’t exploring the potential that exists for involving fans in a more interactive manner than is presently the case.

Ebersol’s new Alliance of American Football will include a digital platform that allows fans to engage in a fantasy-type game that’s tied to the action on the field. Fans will be encouraged to place real-time bets on the action taking place in front of them. “Every single play, you have a 12- to 17-second pause at a minimum in which you can enter a bet on a play that has a plethora of potential outcomes,” Ebersol says, “bordering on an impossibly high number of possible outcomes.”

Leonsis agrees. He notes that there’s an average of 10 minutes of actual action in any football game. That gives fans a lot of idle time between plays. Leonsis says that this type of real-time sports betting could revitalize the sport. He’s waiting to see how Ebersol’s experiment will test that theory.

Ebersol has partnered with MGM Resorts to host the betting services on a mobile platform. He is creating proprietary technology to set real-time odds and is waiting until next fall when his new league begins to play in eight cities. None of his teams are located in a state that currently offers legal sports betting so during the league’s first season the gambling will take place via mobile or at brick-and-mortar sportsbooks.

Mark Cuban, owner of the NBA Dallas Mavericks, doesn’t believe that sports betting will detract from the games. He says that it will encourage more fans to watch the action on the court. “In order to be effective betting, you have to pay attention to the game.” Chris Grove, managing director at Eilers and Krejcik Gaming, a gambling research firm, agrees that betting sports fans will push the industry forward. “Sports fans watching a game are the most valuably situated consumers from a sportsbook’s point of view,” he said.

Observers are already seeing a change in how the leagues, teams, stadium owners and sportsbooks are relating to sports betting. Fans in East Rutherford N.J. who go to see a NY Jets or NY Giants game can make wagers from their seats. In Las Vegas, Golden Knights fans can place bets from the stands where they can see updated odds on the scoreboard during intermissions.

All this sounds good but there are concerns as well, especially since the issue of leagues’ and teams’ participation in sports betting is a blank slate. One wild card involves professional gamblers who can throw a wrench into the fun.

Pros can run their own models and have the ability to place automated bets with little human involvement. Cuban agrees that this technology is the “biggest wild card” that sports betting faces, as the house and the gambler wrestle for an edge.

In general now, the leagues, which were once adamantly opposed to sports betting, recognize the potential new ways to engage with their fans while enjoying new revenue streams. Leonsis says “As an entrepreneur, I’ve always been shocked at how long it takes for some of these things to take off. And then, once they hit, how fast and how big they become.”