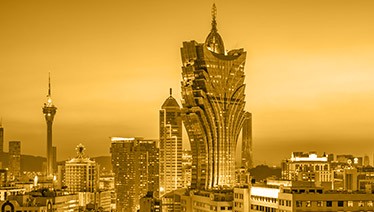 When the U.S. launched a trade war with China last year, financial observers predicted that the Macau casinos would experience a significant fallout as China exerted its influence to deny licenses, raise fees and otherwise disrupt U.S.-owned casino companies.

To date, this scenario has not come to pass, though there are some indications that there will be a recession of sorts in the near future. To meet that challenge Macau casino resorts are making changes and preparing for whatever the future might hold.  Luckily, these changes have not affected online casinos in any way - things are always on the upswing at our Grande Vegas Casino.

Some of the changes going on in Macau include:

No More Rolling Chips for VIPs at Studio City

Studio City, one of Macau’s largest casinos, has announced that it will curtail its VIP gambling operations starting in 2020. The casino’s parent company and majority stakeholder, Melco International Development, announced that Studio City will cease VIP rolling chip operations next year.

Rolling Chips are a VIP amenity that many casinos gift to their high-rolling customers.  “Rolling Chips” refers to a particular set of chips that are distributed to VIP players. The players can use those chips at gaming tables in the casino and enjoy the perks that come with playing with such chips.

No reason was given for the decision though Melco CEO Lawrence Ho has said, in the past, that Macau’s VIP spending had “fallen faster than we had expected.” This has led to a fall in Melco’s profit margin.  The Studio City property proved particularly vulnerable to the decline and Ho warned, even last November, that it was likely that the casino would halt the VIP Chip program by the end of 2019.

When Studio City opened in 2015 it offered no VIP gaming tables. At the time, Ho explained that the company had decided to avoid gaming tables in order to be able to devote all of its 250-allotted tables to the general public. Melco had applied for 400 tables for its Studio City property.

Over time Studio City decided to open VIP amenities in order to appeal to junket operators such as the SunCity Group and Tak Chun Group. But that decision turned out to be a money-losing proposition for the company and they are now focusing, once again, on the general gaming public.

The Sanford C. Bernstein is forecasting that Macau’s GGR will start to show a significant downturn in the near future – possibly as early as this month. The dip could be as much as 12%  – analysts are waiting to see the figures which are due to be released soon.  Japan-based brokerage Nomura is a bit more optimistic but both firms predict that this will mark the first time in almost two years that Macau’s GGR has retracted.

Bernstein analysts Kelsey Zhu, Vitaly Umansky and Eunice Lee are saying that there are several factors for the downturn in the Macau GGR. They are focusing on the week of January 7 – 13. One significant factor involves the new smoking ban that eliminates smoking areas in the VIP rooms in Macau casinos. Additionally, the crackdowns on the illegal point-of-sale scheme are impacting the casino figures as is the visitation slowdown which is expected during Chinese New Year celebrations which will take place in early February.

Smoking was banned in the casinos starting in January 2018 but casinos were given a year’s grace period to bring their VIP rooms into compliance with the ban.

Now that the smoking bans are set, the casinos are seeing that many Chinese VIP players are just as happy to head to casinos in Korea or Australia where smoking bans don’t exist. These players don’t want to have to put up with Macau’s new smoking regulations which include completely closed smoking lounges and advanced smoke extraction equipment.

In addition, many high rollers are wary about the investigation that is currently underway of the “illegal point-of-sale scheme.” That scam allegedly moved $153 million from China to Macau last year through the casinos and resulted in the evasion of China’s currency export controls. Wealthy Chinese don’t want to be caught up in such an investigation and, to avoid that, are staying away from the casinos in Macau.

The Chinese New Year is traditionally a time when families and friends celebrate together. The February 5th New Year holiday is expected to result in a reduction of visitation to Macau.

Analysts point out that, when viewed month-to-date, the hold rate was steady at “around the normal range” of 2.9%-3%. According to one observer, “month-to-date VIP volume and mass GGR are estimated to be down mid- to high single-digits.”

According to Nomura analysts, there is expected to be some slowdown in January but not as much as the Bernstein analysts are saying. Nomura expects the Macau GGR for this month to be on par with what was reported in January 2018 but admits that it could be as much as 5% lower.

Nomura analysts Brian Dobson, Harry Curtis and Daniel Adam agree that the smoking rules and the point-of-sale scheme figures in the reasons for the decline but they add that “We believe the U.S. operators were less affected by the point-of-sale issues, as they tend to be stricter enforcers of the regulations. By segment, we estimate that: average daily mass growth was approximately 6 percent to 7 percent lower versus the average in December; VIP hold percentage was approximately 2.9 percent to 3.0 percent (versus the ‘normalized’ hold range of 2.7 percent to 3.0 percent); and VIP volume growth is tracking approximately 8 percent lower sequentially compared with last month’s average.”