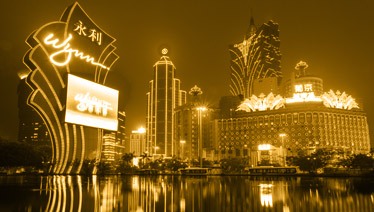 A threatened trade war between China and the United States might be placing the Macau casino empire in peril. Yet many observers see cause for optimism as the mass market drives Macau Grande Vegas casino growth higher from one quarter to the next.

Macau casino operators are monitoring the battle of the words as a US – China trade war seems to be drawing closer. The casinos are worried that US casino operations might be targeted in such a trade war which would impact the operators' ability to renew their Macau concessions and draw Chinese visitors to the sites.

A new report by political and corporate risk consultancy Steve Vickers & Associates (SVA) concludes that the Macau gaming sector  is “highly exposed” to fallout from the trade spat. The spat seems to be escalating and the two nations have hiked tariffs on a wide variety of products. Observers believe that this type of political brinksmanship will end up leaving both countries bleeding.

The SVA report says that Macau casino operators can expect to experience a “dampening” of gaming revenue if the yuan's value falls due to  “any significant slowdown or all in the Yuan's value” if Beijing experiences “further curbing of capital outflows.”

However, in every dark sky there is a bright cloud. In this case the beneficiaries would be local junket operators who thrive by finding ways to circumvent China's capital controls. Even though Beijing is more closely monitoring the junket industry, junket operators are still able to find loopholes that allow them to take advantage in situations such as the current one.

SVA in its report on the possible repercussions of a trade war, notes that all six Macau casino operators will need to renew their licenses to operate in the coming years. The Las Vegas Sands, MGM Resorts and Wynn Resorts are all controlled and owned by US companies which puts them on the line when they request a concession renewal.

Sands is particularly at-risk – Sands is owned by Sheldon Adelson who has close ties to President Donald Trump and the US Republican Party, the architects of the trade war. Steve Vickers of the SVA notes that Adelson was among the top financial contributors to Trump’s 2016 presidential campaign so it might make Adelson a tempting target as Beijing goes after Trump.

Vickers has said that Beijing has a number of tools to use in its trade war and they are as unpredictable as is Trump.

In the shadow of the trade war, Macau is seeing casino growth. The second quarter of 2018 showed growth in the mass market sector, even as the VIP gambling growth rate slowed. The Macau Gaming Inspection and Coordination Bureau (DICJ) reported that the Macau VIP GGR  grew to MOP41.04 billion which places it at a pace of 14.4 percent. This comes close to the 12.7 percent VIP GGR of the last quarter of 2016 (US$5.13 billion). Most of the growth was experienced in VIP baccarat which accounted for an estimated 55.7 percent of all 2nd quarter casino GGR.

Regarding slots play, the DICJ noted that slots, which accounts for the bulk of mass-market gambling, generated MOP32.67 billion ($4.04 billion) in the 2nd quarter of 2018.

Other statistics include information about revenue generated from live multi game products—table-style games with electronic betting and electronic bet settlement, played with live dealers. Those games' revenues rose by 7.7 percent to $81.83 million, up from $76.01 million in the first quarter of 2017.

All in all, the 2nd quarter report on Macau's casino GGR shows that revenues expanded by 17.2 percent over  the same period last year.

International brokerage Union Gaming received the news with a measure of optimism. The mass market-led growth of Macau casinos was good news for operators, demonstrating a strong backbone for Macau casinos’ recovery.

Union Gaming analyst Grant Govertsen reacted, saying “That mass outpaced VIP is also an upside surprise relative to most expectations and, trade war fears notwithstanding, is reason to remain bullish on the Macau names.” He forecasts that Macau’s gaming market would remain robust and again register 3rd quarter double-digit growth in July.

In another boost of good news, gaming-related crime in Macau dropped 4%.

Macau's Judiciary Police reported that 706 suspected gaming-related crimes – crimes committed in casinos -- were recorded during the first five months of 2018. This marks a decrease of 3.8% over the same period last year. The majority of the crimes involved "unlawful detention" related to loan sharking.

The Judiciary Police has stepped up its activity in an attempt to cut crime in and around the casinos. There is an increased police presence in the casino area which is, the police believe, impacting on crime statistics in a positive manner.

Judiciary Police Director Sit Chong Meng said, while at the same time that that there have been less casino-related crimes detected, the police have seen an increase in the number of suspects that have been delivered for prosecution. The police are optimistic about their new partnerships with the casinos that sees the 2 sides working together to reduce crime, especially incidents of loan sharking.

Police Director Sit Chong Meng points out that, "while the police are prepared to focus on alleged gaming-related criminal activity, those activities do not [negatively] impact the overall public security” of the international gambling hub.