Macau -- the New $100 Million Gaming Empire of the East 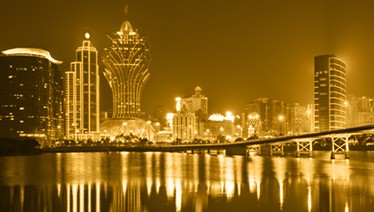 Travelers who are looking for a chance to blend their visit to an exotic culture with some gambling entertainment will enjoy spending some time in Macau, Macau's past as a Portuguese colony allows it to present a unique blend of Eastern and Western cultures that enchant and enthrall.

In recent years Macau has built on the country's gaming history that stretches back for more than 300 years to develop an extensive gambling industry. The country now boasts some of the most luxurious casino venues in the world that bring travelers who are interested in high class resort tourism to the country.

Macau has a unique status among Asian nations. It's a Special Administrative Region of the People's Republic of China. In 1557 China leased the region to Portugal as a trading post – the area remained under Chinese sovereignty  but allowed the Portuguese to administer it as a de facto colony.

In 1999 Macau was reunited with China. Today it enjoys a special status as a Special Administrative Region of the People's Republic of China which allows it many freedoms, including freedom of economic development, that other Chinese regions do not have.

The history of gambling in Macau stretches back for more than three centuries. During the era when Macau was an outpost of Portuguese traders the colony began to develop a gambling industry which drew travelers from throughout the Orient. By the 1800s Macau was known as the "Monte Carlo of the Orient" and, by the 1900s, as the "Las Vegas of the East."

The gaming venues continued to flourish throughout the 20th century and today it's the biggest industry in the territory. The development of casinos and other gambling activities are encouraged by the government which has made significant overtures to European and American casino operators to encourage them to build and operate casino resorts in Macau.

It's worthwhile to both the casino operators and to the government to encourage the gambling industry. In 2009 the casinos generated an estimated 70 percent of the Macao Special Administrative Region's total fiscal revenue in gaming tax. Today the Macao gross gaming revenue exceeds the Las Vegas Strip revenue, making it the largest gambling region in the world.

The government of the People's Republic of China, which is the biggest beneficiary of the tax revenues, job creation and tourism income, offers significant policy support for the casino industry in Macau.

The first casino to open after the 1999 Macau handover from Portugal to China was the Venetian Casino Sands. This marked the first ever gaming investment project in Asia by an American company. The Casino Waldo opened shortly thereafter and the Wynn, MGM and Casino Crown (today the Casino Altira) followed within a few years.

Today there are 40 casinos operating in Macau. Of those, twenty-five are located on the Macau Peninsula and fifteen are on Taipa Island.  The government is presently focusing on “moderate supervision, monitoring and control and healthy growth” in the industry. It plans to strengthen its regulation of the gaming industry and focus on the social problems that have been caused by its liberal gaming laws. The industry is expected to grow and move past a hard-core gambling-focus by promoting projects that will present Macau as a destination of international standards for leisure gaming, regional tourism, convention and exhibition.

Sands Macau Casino is comprised of four casino sites – the Venetian Macau, the Sands Macau, the Plaza Macau and the Sands Cotai Central. Each of these casino venues offers hundreds of gaming machines and gaming tables plus fine dining, bars, luxury hotel accommodations and gambling action. In addition to the traditional table games the Sands casinos offers Sands Stud Poker for an exciting poker game variation. Sands Stud poker is based on the five-card stud poker game. It's played with a single deck of cards. Players compete against the Dealer rather than against each other or against a gaming machine. The game includes a progressive jackpot competition and participating players can bet on the progressive jackpot for their own hand or for the dealer's hand. Everyone competes for the Mystery Prize.

The Wynn Resort Casino in Macau is the second-largest casino venue in the area. It has 1510 gaming machines and almost 500 table games with 11 poker tables, and other table games located on 205,000 square feet of floor space. The Wynn offers a hotel with 2016 rooms plus a spa and three bar/lounge areas. Guests are welcome to dine at any of the casino restaurants which include the Golden Flower, the Mizumi, the Ristorante Il Teateo, 99 Noodles, Red 8, Café Encore, Café Esplanada and Wing Lei.

The Parisian Macau is a Parisian-themed resort which features a half-scale replica of the Eiffel Tower, complete with a lift to take you to the observation decks where you'll enjoy a 360-degree view of Cotai. The décor and architecture are French-themed, from Chinoiserie  porcelains. and crystal chandeliers to the Palace of Versailles-themed reception desk.

On the gaming floor you'll find 400 table games including the traditional favorites along with the Chinese-inspired sic bo which offers a 50-50 chance of winning. Players can also gamble at any of the 2,500 gaming machines including slots and video poker. In the hotel guests will find guestrooms designed with contemporary French flair including views of the Macau Eiffel Tower. The resort hotel caters to families with an open-air pool plus a play area for kids with water slides. The Aqua World site offers a life-size pirate ship, pools and a kiddie play area.

There is a taste of France in the cuisine with French fine dining restaurants and bakeries that offer cakes and patisseries. As you walk around the casino you'll come across mime artists, street artists who will paint your portrait and buskers.