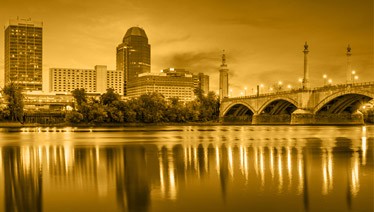 Seven years after Massachusetts legalized casino gambling MGM is set to become the first of the Vegas casinos to open a luxury integrated resort. In addition to the entertainment, activities and luxurious accommodations the opening will mark the first time that gamers can legally wager on table games such as poker, blackjack and craps within Massachusetts.

Players will have their choice of 120 table games, 23 poker tables, 2550 slot machines and different gambling opportunities. The casino is featuring only about half as many slots as can be found in its Foxwoods resort but it's still the biggest slots room in the Northeast.

Surrounding the gambling floor are five-star restaurants, casual eateries, bars, a bowling alley, a movie theatre, shops, an event space and the  250-room hotel. Casino officials say that the resort is expected to employ nearly 3,000 people. That will be a big boost to the employment situation in Springfield from where approximately 35 percent of the new workers will come.

MGM's Springfield casino was built in downtown Springfield, just off Interstate 91. The Las Vegas company invested some $960 million into a development which was a high-stakes project, unlike any MGM has ever built.“ It was not without cost and not without some risk,” said Bill Hornbuckle, president of MGM Resorts.

Springfield was, for many years, a center of America's textile industry. Textiles moved to the Far East and the city went through a long period of depression. Although it's known as the capital of Western Massachusetts, the city has been struggling with a migrating middle- and upper-class, unemployment and all of the ills that poverty brings with it. The MGM casino is seen as a new dawn that will bring money and energy to Springfield's ailing downtown area.

Kevin Kennedy, Springfield’s chief development officer, commented that “It’s going to bring very large numbers of people on a daily basis and that’s going to contribute to the overall atmosphere,” he said. He noted that the casino, in conjunction with a recent surge of construction of market-rate housing and recent renovations to the city’s Union Station transit hub, make sure that “the ingredients are there for a long-term” economic revival.

“You are starting to see these pieces come together,” said Kennedy.

MGM Springfield designed its Springfield casino to blend into the existing streetscape of the city’s South End. Instead of creating a structure that would stand out like a sore thumb the casino used some existing downtown facades with new construction built behind and inside. The architectural vision was obviously an attempt to fit in to the local scene and the casino designers succeeded, much to locals' satisfaction.

There are a dozen entrances into the building which is a departure from the the traditional casino model that funnels patrons through the gambling floor to reach the other sites within the complex.

MGM placed its Springfield gambling floor is in the middle of the resort where it is surrounded by a ring of shops and restaurants. Diners can enter the restaurant of their choice either from the restaurant's on-street entrane or from the casino floor. Hornbuckle described the concept, explaining that “it will be unique and we think it will be meaningful in how the resort interacts with Main Street.”

Designers went to great lengths to connect the décor of the project to the region. Early visitors report that the complex has an eclectic feel which is unusual for a casino in an industry that generally focuses on glitz and glamor (and sometimes skirts "tacky.") The casino is furnished with reclaimed pieces of bric-a-brac and old period furniture, much of which was purchased at the antiques fair in nearby Brimfield. A 19th-century chandelier, hanging over the elevator vestibule, was acquired when MGM chief executive Jim Murren spotted it in an antique store in New York.

The lobby is packed with walls of books. Yes, books. Classics, books by local authors, even random school yearbooks. If you graduated from Agawam High School in 1969, your yearbook is here, full of handwritten notes and signatures from class members.

The resort also features scores of antique globes and countless old trophies. The lobby is packed with walls of books – real books including classics and books by local authors.

Just as much thought went into the hotel area as the first-floor casino/shops/restaurant. The hotel occupies five stories above the casino and no two rooms are identical. The rooms continue the general ambiance of old refinement with dark colors and neutrals, brass lamps, exposed concrete ceilings, Edison bulbs, natural woods and leather.

Decorative oddities, from big brass keys to small animal skulls, sit under glass domes. Some suites have live-edge dining tables made from a local tree. This is NOT your traditional casino hotel – it feels a little like a wizard’s workshop for a fresh and unusual casino venue.

Items that bring to mind Springfield native Theodor Geisel, better known as Dr. Seuss,  and quotes from Emily Dickinson, the Amherst poet of the 19th century who published work in the Springfield Republican newspaper, abound. Merriam-Webster, the dictionary published by the Springfield publishing company, is represented with wall artwork printed on dictionary pages and fat old dictionaries scattered on stands.

On the casino floor sits the Commonwealth Bar, designed to look like “an old-style haberdashery.” The drink menu will include the Grand Marnier Quintessence, fresh lemon, and a gold sugar rim and $25,000 “Indian sidecar,” which is made with a 117-year-old Croizet cognac.

The gambling floor, however, has everything -- rows of flashing slot machines, poker tables, roulette wheels and all of the traditional attractions of a gambling emporium.

Springfield seems ready for the challenge.