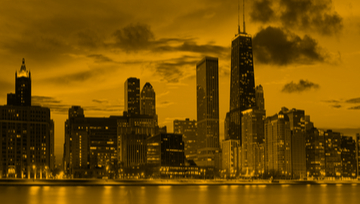 A long-awaited piece of legislation that will expand Illinois' Vegas casino industry has passed the Illinois legislature and been signed into law. The  so-called “gambling-expansion legislation” will allow a casino to be built in the southern suburbs of Chicago. Now, the question on everyone’s minds is, where?

Planners have been preparing for the establishment of a suburban casino for years but the site is yet to be determined. Numerous towns, hoping for jobs and tax revenues, are vying to bring the facility to their community. The towns that are lobbying to have the casino built within their boundaries include Crestwood, Country Club Hills, Lynnwood, East Hazel Crest, Ford Heights, Lynwood, Matteson, Homewood and Tinley Park.

Crestwood mayor Lou Presta said that no one knows where the site will ultimately be located. “Your guess is as good as mine. We all believe we have the best site.”

As each of the south suburban towns try to convince state officials that their locale will be the best site for the new casino, a derby-like sweepstakes is developing. The gaming legislation was a surprise to everyone, bestowing not one but two gaming facilities for the south suburbs. In addition to the casino, the bill includes provisions to build a horse racing track – called a “racino” --  which can include up to 1,200 gaming positions.

Ultimately, the Illinois Gaming Board will decide the location in which the racino and the casino will be built. It’s assumed that whichever town is chosen will partner with private developers to submit plans for consideration.

It’s not clear when Governor J.B. Pritzker will sign the bill. Until then, the board can’t formally open the process to seek requests for proposals.  The board’s next regular meeting is scheduled for Aug. 1, but it could call a special meeting sometime sooner.

No decision will be made for the next few months on the site of the new south suburban casino. The five-member gaming board has one vacancy and board chair Don Tracy, who was appointed by former Gov. Bruce Rauner, will be stepping down as board chair next month when his term expires. Pritzker must appoint two new members to the board before it can meet to decide on the site for the new casino..

While the board awaits reorganization, six south suburban towns are positioning themselves as the best location for a casino.  Much of the language of the legislation is unclear but it does specify that the new south suburban casino would be located in one of six townships:  Bremen, Calumet, Bloom, Thornton, Worth or Rich. The “racino” will be built within one of these townships or in Orland.

Country Club Hills Mayor James Ford, whose village’s proposed site is near the intersection of Interstates 57 and 80, said “We’ve always had the best site. We could easily facilitate a casino there.” Ford said that most of the land is privately owned, though some of it is owned by the village. The site is vacant and ready for development. “No other town can match the traffic count that we offer,” Ford said.

Crestwood’s plans involve hosting a casino site on about 50 acres that’s presently owned by the Metropolitan Water Reclamation District. The casino would be built, if Crestwood receives the license, along the Cal-Sag Channel near Cicero Avenue and Cal-Sag Road. Crestwood mayor Lou Presta commented that “I think we have a good spot.”

Presta said that village officials have discussed leasing the land from MWRD. They have been in talks with Illinois Tollway representatives about the possibility of adding an interchange along the I-294 Tri-State Tollway at Pulaski Road. Over the years the village has invested about $15 million to clean up the property and prepare it for development. “If we don’t get a casino we’ll develop it as something commercial or industrial.”

A license for the south suburban casino will be added to five others Chicago casinos to be built in Chicago, Danville, Rockford, Waukegan and Williamson counties. Illinois legalized riverboat gambling about ten years ago. Another ten casinos operate outstate. In addition to the land-based casinos, video gaming terminals were legalized in Illinois in 2009 and dozens of them operate at establishments around the state.

Presta sees the casino as a source of significant revenue.

Presta said that the village would not offer any tax incentives to lure a casino developer. “I would like to take every dollar and give it back to residents.” That would be done, he said, by abating property taxes or lowering village fees, with the shortfall made up by revenue flowing into the village coffers from the casino.

Other locales that are focusing on obtaining the south suburban casino license include Homewood and East Hazel Crest which are partnering to attract a casino. The villages want to build the casino south of I-80/294 along Halsted Street. Homewood Village Manager Jim Marino explained “It’s right at the interchange, with easy access and high traffic counts.” The property is a privately owned site that straddles the border of Homewood and East Hazel Crest.

The two towns are collaborating, and have approved an intergovernmental agreement that sets forth a revenue-sharing agreement. “We would split it on a percentage basis,” Marino said. Homewood would get 45% of the proceeds and East Hazel Crest would get 55%. Pat Lazuka, East Hazel Crest Village Administrator, feels that the location offers a competitive advantage. “It is strategically situated to intercept the gaming traffic flow to the Indiana casinos,” Lazuka said. “It will be the economic engine needed to generate jobs for the disadvantaged communities of the south suburbs.”

Other towns vying for approval for the casino include Tinley Park which would build on the site of the former Lincoln Mall. Tinley Park is also in the running for the proposed “racino” which, if approved, would be build on a 280-acre site, northwest of Harlem Avenue and 183rd Street, where a former state mental health center was once located. Tinley Park Mayor Sheila Chalmers-Currin is concerned that no revenue-sharing provision exists for the racino development. “In fairness, it should,” she said. “It would be fair if all the communities would benefit from that.”

One difficulty with the Tinley Park site is that it’s within a 35-mile radius of the Stickney Hawthorne Race Course. The legislation includes a provision that says that if a new track is located within a 35-mile radius of an existing track, written approval from owners of the existing track must be given before development of a new track could move forward.