Next Step for Console Vegas Casino Gaming Will Be Cloud 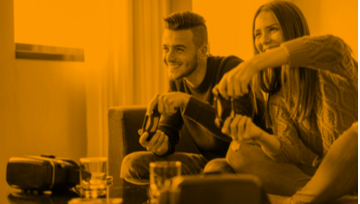 Console manufacturers and Vegas casino console game developers are excited about Project xCloud, a new video game streaming device from Microsoft that allows players to instantly stream PC and console games to their preferred gaming device via an internet connection.

Now, in addition to accessing console games through paid digital downloads, physical discs and free game give-aways, Xbox users will soon be able to play their games on a PC, a console or on their mobile device.   Microsoft is planning to launch their new video game streaming service in the coming months. The technology will enable users to stream any of the Xbox games using an Internet connection.

xCloud doesn’t involve downloading the games but, instead, gives users access through instant streaming via Microsoft’s servers on Azure Cloud. The company doesn’t intend to replace traditional digital and disc-based gaming.  Instead, players will be able to access a specific PC or Xbox game without purchasing the entire system.  In addition, this platform opens up console-quality gaming to everyone, including those who don’t have the needed hardware to play on a console.

Dedicated gamers are likely to continue to play on their console, where they can enjoy 4K gaming with HDR. But the option to play games at any time and from any location on any device is alluring and Microsoft expects that it will boost its console sales.

How Will it Work?

Using Azure’s data centers’ hardware, Project xCloud will be able to deliver gaming experiences remotely. The user will identify the game that s/he wises to play and the games will be streamed to the selected device.

The user will need a strong network connection that will allow him/her to access the games both at home, using Wifi, and while moving around, when using a data connection. Through cross-data connections, players who are in the middle of playing a game at home and need to leave will be able to pick up directly where they left off via the Cloud.

The xCloud platform won’t be limited to just a handful of Project iCloud-enabled games. Users will be allowed to play their entire library of Xbox One games, along with the games that Microsoft has released on PC.  That’s a library of over 3,000 games that will become instantly available, with no adaptation needed on the part of developers.

Xbox has been trying to manage an ecosystem that takes into account the needs of players with varying needs and device-accessibility for many years.  Phil Spencer, head of Xbox, is excited about the new options which, he says, takes console gaming into an entirely new realm.

"It's one of the directions the industry is headed. To me, it's about what you as a gamer want to do, and I'm not trying to tell you that owning a box that plays video games is a bad thing or that somehow that's not needed." Spencer said. "I think that the cloud inevitability as part of gaming is absolutely true. But we have more compute devices around us than we've ever had, whether it's your phone, a Surface Hub, or an Xbox. The world where compute devices are gone and it's all coming from the cloud just isn't the world that we live in today."

Spencer acknowledges that physical devices are still very much part of the equation when it comes to cloud gaming. Instead of making a new device specifically for it, xBox has invested in the new technology. "Last year we talked about xCloud and then we said we were working on new game consoles, but that's all I said." Spencer clarified, "We didn't say that [a streaming console was in the works]. I think maybe some people thought that that was the disc-less one that we just shipped. We are not working on a streaming-only console right now. We are looking at the phone in your pocket as the destination for you to stream, and the console that we have allows you to play the games locally."

Lag time is a concern that has always surrounded cloud gaming. Cloud gaming often means that the controller inputs translate too slowly into action on the screen. While Spencer recognizes those concerns, saying  "I don't think anybody should tell you that there's no lag,” he believes that the advantages of cloud gaming outweigh the disadvantages.

"Going back to our transparency, there's a truth that I think is always important for us to talk about with our customers. In xCloud, we are building a convenience capability to allow you to take your Xbox experience with you. Meaning, that's why we focus on the phone, and the experience is not the same as running the games on an Xbox One X. I'm not going to say that it's an 8k 120 hertz thing. That's not what we're doing. We're going to bring convenience and choice to you on your phone.

"You can jump in a party, we can voice chat. Everything works the same as it does when I'm sitting with my console from a community and content perspective but you're running it from a cloud, which is going to feel different."

Spencer has been traveling with an early version of xCloud on his own phone and so far, he says, so good. Internal trials are being conducted so the xCloud team can install the application on their phone and test how the games stream. The first games for beta tests are scheduled to be released in October but, at the beginning, won’t be a fully-formed service.

This year’s launch of Project xCloud marks only the beginning for the Xbox game streaming service. Even once it’s released to gamers, Microsoft will continue to test and resolve issues. Spencer emphasizes that this technological shift will take time.

"I think this is years away from being a mainstream way people play. And I mean years, like years and years. Let's take Netflix, which is 20 years old. I think we forget that sometimes because tech moves so fast. It's 20 years old at this point, so it took two decades for us to get to the point where shows like Game of Thrones and House of Cards are some of the biggest shows in the planet and mainly watched via streaming. I think game streaming will get there faster than 20 years, but it's not going to be two years. This is a technological change. While it seems like it happens overnight, it doesn't.

"It takes time for these services to evolve. We are building for the long-term, but that's why choice is so critical. I'm not trying to say go sell your consoles today and switch over to streaming because the experience just isn't the same as playing on your console, but I do think in terms of reaching everybody, the democratization of play and content, it's important that we don't lock all of these experiences behind purchasing a certain device.

"And way over time, we'll have a global service that can reach everybody and the infrastructure to reach any customer with a consistent and high quality internet service, but that's going to take time. We talk about Project xCloud and we use words like 'trials' not because we don't believe in our tech--our tech is as good as anybody's tech out there, and the team is doing really amazing work--but this is about the reality of time and choice for customers."

iCloud will continue to evolve and new, creative uses may be found. Spencer and the team want to make it an integral part of the industry. Spencer explains ways that the team wants to harness the new technology for innovative purposes.

"We've already started putting xCloud servers near locations where our largest third party developers are. So now we're starting to get developers at third parties on it so they can see their game on a phone, which is critical because there are things like font sizes that if you wanted to take advantage and understand how the game runs on the phone, you want to make it available. You want them to see it and experience it themselves.

"We've also already put into the Xbox SDK, because if you're streaming, a developer might want to do something different if the game was running locally. All the developers that are building Xbox games today have access to that capability of determining whether the game is being streamed or running locally, which I think is a great addition.

"You'll have certain developers that will take advantage of it early. We already have some of the early adopters asking for [it], because there are certain things that the cloud makes more possible than happened in the home. A good example of that is our blades right now that have all the Xboxes in the data centers have multiple Xboxes on one blade...basically like a bunch of Xboxes in your house that are hardwired together. So the latency between all of those consoles is negligible. It's almost a zero because they're literally hard-wired together. If we were to play games online, there is latency from where you live and I live, right? Our two Xboxes just take time to sync."