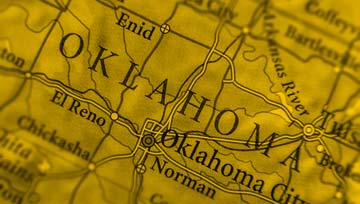 Oklahoma Governor Kevin Stitt has indicated that he is preparing to terminate a compact that the state signed with local tribes 15 years ago. Stitt says that the compact is running out and the state is entertaining inquiries by commercial casino operators who have reportedly told the governor that they’d be prepared to pay an 18 percent tax if they are given the chance to step in and run Vegas casino online and land-based gambling sites.

The tribes operate 141 casinos in the state. These casinos operate under voter-approved compacts that give the tribes exclusive rights to run casinos in Oklahoma.  The tribes pay between 4% to 10% of their revenue in tax on their profits, a low payment in comparison to what casino operators – including gaming tribes -- pay in other states. In Oklahoma, some of the revenue is  dedicated to dog and horse racetrack purse funds which lowers the payments to the state even more.

Under the Indian Gaming Regulatory Act of 1988 (IGRA), a tribal-state compact is necessary for any Class III gaming on reservations. The compacts were designed to allow state and tribal governments to come to a negotiated agreement that would enable the tribal governments to own and operate casinos on their reservations. The compacts are designed to resolve issues of overlapping jurisdictional responsibilities between the two political entities. The goal of the compacts involves determining how to balance power between tribal, state and  federal governments.

Oklahoma’s governor has been trying to renegotiate the compacts that his state has with Oklahoma tribes. He noted that commercial casinos would be willing to pay up to 18% in taxes and has suggested that the tribes do likewise. Stitt has set December 31st as the deadline for renegotiating the compacts and says that if no new compact is signed, after January 1st, any tribe that operates casino gambling in the state will be doing so illegally.

Under the current compact Oklahoma tribes have exclusive rights to casino gaming throughout the state.  In return, they pay between 4% and 10% of the revenue to the state. Stitt points to other states where tribes pay a higher percentage for gaming rights and says that he wants Oklahoma tribes to do the same.

The tribes counter that other states use a broad range of diagnostics to determine what the tribes should pay under the contracts.  These elements include not only revenue but also competition, personal income and state population. Cherokee nation Principal Chief Chuck Hoskin Jr. said, “The governor is wrong. He doesn’t have to take my word for it. He can take the word of outside observers such as (former) Gov. Brad Henry, who negotiated the compact.”

According to Hoskin, renegotiating the compact will be difficult because there’s no legal precedent on which to stand. “It is not helpful, productive or good-faith bargaining, which the tribes have always been willing to do. We are not going to bargain a compact with a phony deadline above our heads. It is important for the Cherokee people to understand that Jan. 1 will look the same as Dec. 31. We will continue to lead the state in gaming, and we will continue to wait for the governor to back off on an expiration date and get back to really discussing the compact.”

It’s not clear what state officials could do to enforce any closure of state casinos.  Such a step might violate both tribal law and tribal sovereignty. A more likely scenario might involve a state lawsuit against any tribe that operates beyond the date of the compact’s “end of term.”

The tribes have indicated a willingness to renegotiate but they insist that they will not do so unless the compacts automatically renew on January 1st  and Stitt acknowledges that there’s no deadline.

To date, Stitt hasn’t offered the tribes anything for paying a higher rate to the state. He asserted, “I am trying to be a good-faith partner and not negotiate in public…the truth is on our side. I feel so confident that Oklahomans can see right through a certain industry, the casino industry, saying, ‘These go on forever.’ That can’t be true.”

Gov. Bill Anoatubby of the Chickasaw Nation informed the Department of the Interior that any attempt to suspend Chickasaw gaming operations would be an “intolerable risk” to the tribe. The Chickasaw tribe is the largest gaming tribe in Oklahoma.

Oklahoma Indian Gaming Association chairman Matthew Morgan, who is the Chickasaw Nation’s executive officer for policy development and gaming, said that tribal governments could withstand long-term negative effects if forced to fight it out with the state government in the court system. Morgan added that, even if the state and the Indian tribes reach an agreement before Jan. 1, such a renegotiated compact would require legislative endorsements and the approval of the U.S. Interior.

According to an American Gaming Association analysis, Oklahoma’s 141 casinos support nearly 76,000 jobs and have an economic impact of nearly $9.8 billion. Last year casinos in the state generated gross gaming revenue of $4.5 billion.

It would not be beneficial for either the state or the tribes to allow the dispute to go on for too long.