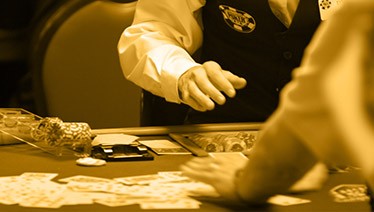 Casinos run online Vegas games tournaments for many of their games but the highlight of any casino’s tournament schedule is the poker tournament. If the casino is a big one and if the prizes are major, the tournament may draw the world’s top poker players to the competition. It’s not uncommon for the poker pros to fly from one tournament to the next and the casinos schedule their tournaments to accommodate the big players’ schedules.

Many amateur poker aficionados pay significant buy-ins for the chance to play with the pros. Usually the opportunity to sit with the world’s top poker players is enough but every once in awhile a newcomer walks away with the grand prize.

Some of the most exciting recent poker tournament news:

PokerStars European Poker Tour played in Barcelona this year and Michael Sovza of Malaysia won the first €10,300 High Roller Tournament. Although more popularly known to play cash games, Soyza is developing a name on the tournament circuit after a strong showing in the Asian Poker Tour (APT), Macau Pot Limit Omaha (PLO) event. He also took down the Aussie Millions Accumulator event in 2015 and in 2016.

Other recent tournament wins include the APT Manila High Roller event, the Poker King Club Main Event and the Macau Poker Cup High Roller Event.  Now in Barcelona for the PokerStars tournament, Soyza has been tested. On Day 1 he was down to only 10 big blinds but he fought back and made the final table. Even though he lost a big chunk of his stack he held on and made it to heads-up play as he aimed at the face-off with champ Kai Lehto.

Lehto and Sovza went head to head at the final. Lehto shortened the gap to a 1 to 2 disadvantage, earning a big pot, but that’s as close as he got. Eventually Lehto was called by Sovza after he went all-in with pocket deuces. Sovza held an Ace-eight with an Ace on top when he rivered a flush to earn the hand and the tournament win.

This week Sovza will be continuing to compete in the PokerStars European Poker Tour Barcelona Main Event plus in the last €10,300 High Roller. He will also compete in some side events including a Charity High Roller tournament.

The PokerStars European Poker Tour Barcelona €100,000 Super High Roller ended with Ahadpur Khangah and Mikita Badziakouski facing off in the heads-up round. Once Mikita  obtained the final chip lead he was able to take out Khangah which earned him the first place finish and a bit over €1.6 million, a career high.

Nine players returned to the felt on the final day of the event. Cary Katz was the first to go, followed by Byron Kaverman. The last seven standing earned prizes – in addition to Badziakouski (first) and Khangah (2nd), Ahadpur Khangah, Matthias Elbinger, Timothy Adams, Benjamin Pollak, Rui Neves Ferreira and Jean Ferreira all walked away with a portion of the €100,000 Super High Roller

The World Championship of Online Poker, which started last week and will run through September 17th, is set to include more than 60 levels and $70 million in guaranteed prize money. Players, who include amateurs and poker pros, will enjoy prime tournament gaming with options of low, medium and high buy-ins. Entry prices range from $2.20 to $25,000.

Additional NLHE events included an 8-Max Progressive KO as well as 6-Max events. As the schedule progresses players find more and higher values within the series.

The tournament winds down with the 2018 WCOOP main events which are scheduled for September 16th.  Participants can choose to pay the $55 buy-in to compete in a $1 million GTD event or pay the much higher $5,200 to compete in the $10 million GTD. A minimum of $1 million will be awarded to first place.

For poker enthusiasts who want to take part in WCOOP events with a lower cost, PokerStars will provide special Spin & Go tournaments with a buy-in of just $5 to $25. Spin & Go players vie for entries into WCOOP events, tickets and cash.

Wynn Las Vegas has announced its 2018 Fall Classic Schedule. The Wynn Classic is one of the top poker tournaments and draws big-name poker champions from around the world.  The tournament will kick off on September 26th and run until October 14th  and will offer 16 events and over $1.8 million in prize money.

The 2018 Wynn Classic will be longer and involve more events than ever before. There will be a $400 Pot Limit Omaha event on October 3rd as well as an October 10th $3,200 High Roller. Several events involve no limit hold’ em with the big blind ante format.

The Championship Event is generally the most anticipated Classic event. The $1,600 tournament features a $500,000 prize pool guarantee with players invited to take part in starting flights on the 12th and 13th. Every player receives 25,000 in starting chips and blind levels for Day 1 are set at 45 minutes and then increase to 60 minutes on Day 2 and 75 minutes on Day 3.

Players who reach the Championship level will be competing for the largest guaranteed prize pool.

The Poker Classic Super Satellite, where buy-ins range from $100 to $400, will be hosted by the Encore poker room. This Super Satellite offers competitors blind levels for each buy-in and a specific number of starting chips. The winner earns an entry into a Wynn Fall Classic event.