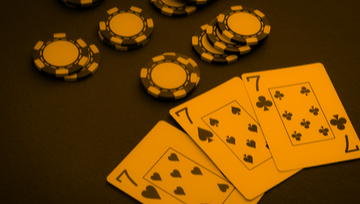 When you visit Vegas or play online, it’s almost certain that at least some of the time, you’ll be playing no deposit bonus codes poker.  Poker is one of the most popular casino games in both land-based and online casinos throughout the world.  Pros and amateurs enjoy the challenge that the combination of skill and luck demand. This makes poker no deposit bonus playing #1 on most Vegas visitors’ to-do list and, increasingly, 3-card poker the game of choice for a large percentage of online and on-site poker enthusiasts.

Most Vegas casinos offer different types of poker.  Texas Hold ‘Em poker is one of the most popular followed by Caribbean Stud Poker and Let It Ride poker.  Derek Webb is the originator of three-card poker. He fused the best elements of these popular games to create the new poker type.  Three card poker has quickly become a Vegas favorite.

According to Webb, “I wanted to design a three-unit bet game that incorporated what I thought was the best of Caribbean Stud and the best of Let It Ride, and it was going to be naturally faster than Caribbean or Let It Ride. But also, the design needed to make sure that we got the three bet units out more frequently than Caribbean or Let It Ride. And those two combined features meant that it could go with a lower house advantage than either of those games, and give the player a more positive experience, and at the same time, create a higher win for the operator. So, in effect, you’re serving both sides of the table better than what was already out there.”

Webb blended a volatile Pairplus side bet (7.28 percent) with a relatively low base game house edge (3.37 percent)  to provide players with the best of both worlds for casinos and players alike.

What many players appreciate about Three Card Poker is that  it’s simple. All you need to know is that you need to make the “Play” bet with Q-6-4 or higher while you fold everything less than that.  That’s what makes the game so appealing to casual players.  At the same time, it’s a favorite of pros who find the game to be highly energetic and skill-based.

You might find one or two Caribbean Stud Poker or Let It Ride tables at your favorite Las Vegas haunts but you can expect upwards of 10 Three Card Poker games at many of the top casinos.

Best of all, there aren’t any reduced payouts or inferior pay tables in Three Card Poker.  Just a fun-filled game with good payouts. The Vegas pros say that these are the best Three Card Poker games on the Strip.

The iconic Caesars Palace Las Vegas Hotel and Casino, located in the heart of The Strip, features the highest number of Three Card Poker Tables on Las Vegas Boulevard.  They have ten tables so even on the busiest weekend nights and holidays, you won’t need to wait around to find an empty seat.

According to Caesars, “Caesars Entertainment casinos in Las Vegas and Atlantic City are offering up a Three Card Poker “side bet” that’s too incredible to be ignored: Combine your three cards with the dealer’s three cards to make a six-card royal flush in diamonds…and fly home a millionaire.

In addition to the regular games, there’s a Six-Card Royal Flush Progressive Jackpot side bet that you can, if you want, attach to your game of Three Card Poker: for an extra $5 on top of your base Ante bet, players are eligible to compete for the progressive jackpot that’s valued at  $1 million for top prize. The house edge on the progressive jackpot is 18.10 percent but for only an extra $5 deposit, there’s a chance to win lottery-like seven-figure sums.

The jackpot is linked to all Caesars properties including those located Downtown and other off-the-Strip locales. Caesars VP of Table Games commented  that “By linking them citywide it only increases all our jackpots faster, resulting in millions of additional prize money awarded in Las Vegas.”

The Palazzo and Venetian are two sister casinos that have their own version of the Three Card Poker progressive. It’s an easier jackpot to achieve because there’s only a natural five-card Royal Flush needed to achieve a win since only 5 cards are needed to suits aren’t a factor.

Lance Gautreaux – Senior Vice President for Venetian and Palazzo parent company Las Vegas Sands Corp., says “The Millionaire Progressive has paid out more than $5 million this year. That’s five millionaires, made each from a $5 side bet. A huge congratulations goes out to all of our winners so far.”

Both the Palazzo and Venetian feature both low- and high-betting Three Card Poker tables including $10 / $500 limits at Venetian, and three more with slightly higher $15 / $500 limits at Palazzo.

Once you get the hang of Three Card Poker, it will likely turn into your preferred game.  It’s simple and elegant while demanding skill and strategy.  Plus, there are progressive jackpots for players who want to try their luck. Most casinos on the Vegas Strip don’t feature three-card poker but if you look carefully, you can find them.