Risks of the Japanese Casino Industry 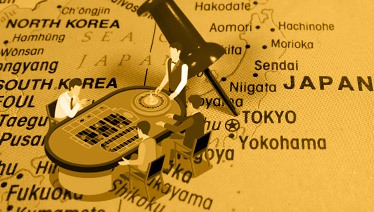 The race to get in on Japan’s new casino industry is heating up as operators from around the world woo local officials and government lawmakers in their bids to get a  piece of the pie.  Many observers question whether these outsiders fully understand the Japanese infrastructure which they should know in order to do business properly in the country.

The largest potential bidder, MGM Resorts International, is targeting the Japanese prefecture of Osaka for a proposed Japanese MGM casino, the U.S.-based, land-based and online casino operator has announced.  MGM’s plans are dependent on it being granted a license to open an integrated resort by the Japanese government.

MGM Resorts chairman and chief executive James Murren said, “We just recently opened up an office in Osaka. We’ve committed now to the mayor and to the governor of Osaka. MGM has adopted an Osaka-first strategy. We are focusing our considerable resources on Osaka.”

Mr Murren said MGM’s plan was to form a consortium of  partners and programming before they submit a formal request  to establish a property. Mr Murren said that MGM Resorts has a projected timeline of events. “Our guess is that an operator will be selected by Osaka by early 2020."

The next step for Osaka or any other jurisdiction is to go to the central government,” Murran said. “We think Osaka will be one of the three concessions that will likely be granted, but we know the central government has to select Osaka and its operator. That probably happens maybe 12, 18 months after Osaka itself picks its operator. Osaka’s goal is to have an IR opened by 2025. That’s when the World Expo is in Osaka.”

Osaka is the second-biggest urban area in Japan. Japan’s central government must approve the location if it is to become one of its three approved integrated resorts licenses for the country. One possible locale for an Osaka IR would be on Yumeshima island -- the IR would serve as a way to boost tourism to the region.

Should Japan Take Outside Operators to Run Their IRs?

Many critics think that, if Japan is going to develop a casino industry, they shouldn’t take outsiders to run the integrated resorts. The legalization of casino gambling in Japan represents tremendous economic opportunities for Japan but investors should be prepared to play by Japanese rules.

Japan’s casino legalization represents the industry’s biggest new opportunity in years. The Japanese have made it very clear that it will unfold on Japanese terms and the question remains – do foreign operators understand what that means?

Many business analysts who are familiar with the Japanese business culture believe that  foreigners don’t really understand how integrated resort development will proceed in Japan. Japanese business and social norms won’t always work in tandem with the way the casino operators are accustomed to doing business.

One example involves the timetable of when a decision can be expected regarding which companies will be granted IR licenses. The upper house of Japan’s Diet passed the IR Implementation Bill in July 2016. In December of that year a complement to the IR Promotion Bill passed as well. In tandem, those two bills mean that legal casino gambling can be launched in Japan.

Gaming operators are ready to start moving but nothing can happen until the Casio Control Commission is created. This commission, which was authorized by the Diet’s bills, will be expected to draft detailed regulations to govern the IRs, select the winning bidders (in cooperation with other agencies) and enforce the rules once the casinos start to operate. That’s reasonable. Now the Diet simply needs to pass enabling legislation to establish the commission. That could take years.

Looking at the IR bills’ legislative history suggests what might come (or not come) next. Prime Minister Shinzo Abe, a proponent of bringing casino gambling to Japan, introduced the first IR bill in late 2013.  The bill was met with significant legislative resistance and that left that initiative in no-man’s land for more than a year and a half. In July 2016, Abe’s ruling Liberal Democratic Party successfully pushed the first IR bill through. Then, an extension of the parliamentary session was necessary to ensure passage of the 2nd IR implementation bill. Even that, however, wasn’t enough to get the ball rolling as a Casino Control Commission must be put in place before any action can occur.

Many observers believe that the same delaying tactics that kept Bills 1 and 2 from being passed in a timely fashion will stall the creation of the Casino Control Commission and, by default, the implementation of the IR bill. The LDP may have the votes to create the commission --- but it may not. In addition, the plan to allow casinos to open is unpopular with the Japanese public and that may convince legislators who are on the fence about the issue to delay the establishment of the commission, perhaps indefinitely.

One question that the commission will need to address is whether licenses will require a minimum percentage of Japanese ownership. Front-runners for the IR licenses such as the Las Vegas Sands and MGM International need that information before they decide whether they want to invest in the Japanese market. Many Japanese, including some of the lawmakers who voted for the IR bills, want to see a large local ownership requirement that could open the way for smaller regional players. The big casino operators, of course, are opposed.

Another subject for the commission to consider after it is staffed is whether bids for licenses will be accepted in stages or whether the commission will consider applications for all 3 licenses at the same time. Investors and casino operators need this information to decide whether they intend to pursue proposals in more than one region -- separate considerations give companies three separate changes to apply for a license. The decision about this matter will determine the timeline for, what promises to be a massive market.

If it ever gets off the ground.