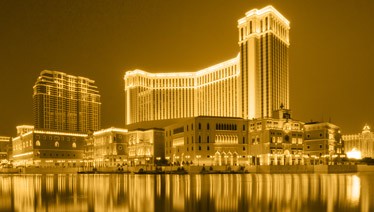 Things were a little shaky in 2016 when Macau implemented new cash withdrawal regulations which, observers believed, would negatively impact on the casino industry. Sheldon Adelson, the Vegas casino king, had faith that the downturn was only a blip on an otherwise upward Macau gambling trajectory. His instincts turned out to be spot on and he celebrated with a $1.7 billion bonus that brings his net worth up to $34.9 billion.

It was only a few years ago that Adelson's Las Vegas Sands invested more than $10 billion to build a string of casinos in Macau. Today shares of Adelson’s casino empire, Las Vegas Sands, are shooting up following a report that showed a 23.7% increase in Macau gaming revenue.

Adelson owns (directly and via trusts) more than half of Las Vegas Sands’ shares so his personal wealth, as well as his business, are seeing unprecedented successes. The Sands and Adelson have withstood criticism and controversy, notably a Department of Justice charge that the Sands violated the Foreign Corrupt Practices Act by "willfully failed to implement internal accounting controls" designed to ensure the legitimacy of payments to a consultant who was hired to promote Asian casinos in the East.

Many people are also questioning whether Adelson has overplayed his hand by investing $10 billion in the Macau operation. Macau is a seaport that is about an hour's ferry ride from Hong Kong. In the last decade Macau has overshadowed Vegas and has become the world's newest and most successful gambling venue.

Adelson started to invest in Macau in 2001, well before most other casino operators even thought about the site. Today the Sands' Macau holdings provide the majority of the revenue for Adelson's company but it has attracted Chinese corruption and crime to the operation as well as a money-laundering operation that has allegedly laundered billions of dollars for the ruling elite in China. The chair of Nevada’s Gaming Control Board told a federal commission in 2013 that it was “common knowledge” that Asian organized crime dominates the Macau casino VIP rooms.

Adelson is one of the most politically-involved billionaires in America today so many people are asking whether the money that Adelson donates to various politicians is, perhaps, tainted. Carolyn Bartholomew, vice chairman of the bipartisan US-China Economic and Security Review Commission comments “With Citizens United, there’s an awful lot of money sloshing around in our political process. People have a right to know whose money that is, and that the proceeds being spent in the political process are not from illegal and illicit activities.”

No one has been able to put the reins on Adelson's ability to influence the political process in America – and in other countries as well. Adelson favored Marco Rubio as the 2016 Republican candidate and although Rubio didn't win the Republican candidacy, he did come closer than any other member of his party to beating Trump for the nomination.

Adelson's power was never more evident than in the 2016 elections. The Adelsons supported Trump openly and funded a shadowy holding company that had purchased the Review-Journal whose editorial opinions are carefully monitored by many influential commentators. For instance, as the Review-Journal  sale was being finalized, the paper undertook a detailed investigation into the courtroom habits of three Las Vegas judges including one who had infuriated Adelson with her rulings in a case in which he was involved. Elizabeth Gonzalez fined Adelson's lawyers for deception and withholding documents and ruled that the case could not be moved to Macau, which is what Adelson wanted.

Adelson quotes Vince Lombardi who said ‘Winning isn’t everything, it’s the only thing."  Adelson once said “….. I do whatever it takes, as long as it’s moral, ethical, principled, legal.”

Observers wonder if Adelson's view of 'moral, ethical, principled and legal' coincides with the generally-accepted view of these attributes. What is clear is that Adelson's uncanny nose for success has transformed Vegas and Macau and may move on to other gambling sites as well.