Sports Betting and the Federal Government 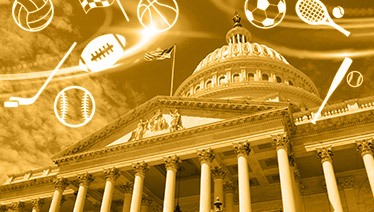 Between 1992 and 2018, sports betting in the Vegas casino and other United States gambling venues was virtually outlawed based on the Professional and Amateur Sports Protection Act. The law, passed by Congress, eliminated states’ rights to allow sports betting, except for states (such as Nevada) where sports betting had been in operation before the law took effect.

This past May the Supreme Court ruled that PASPA was unconstitutional. That ruling opened the door for states to legislate their own sports betting laws. Currently, sports betting is fully legal and operating in 8 states - Nevada, New Mexico, Mississippi, Pennsylvania, New Jersey, Rhode Island, Delaware, and West Virginia.

Two states, Arkansas and New York, have bills on the books and are examining ways to begin sports betting to start in their states. Bills to legalize sports betting have been introduced in over 20 additional states – the bills are expected to come up for a vote in those states this year.

The first hearings on possible future sports betting legislation took place this past September under the auspices of the Subcommittee on Crime, Terrorism, Homeland Security and Investigations. This was the first step in examining whether Congress should enact federal oversight over sports betting. Bob Goodlatte (R-Va.) called the issue "ripe for consideration."

Congress is under pressure from major professional sports leagues which want federal guidelines, specifically those that will ensure that the leagues have a voice. "We are very concerned leagues and states alone cannot fully guard against the harms Congress has long associated with sports betting," Jocelyn Moore, NFL executive vice president of public affairs, told members of the committee.

Major leagues are concerned about how they can best protect game integrity in an age of sports betting. The leagues want authority over what types of wagers will be allowed, requirements that sports betting operators use official league data to settle wagers and tools for law enforcement to go after violators.

The casino industry’s position was presented to Congress by the American Gaming Association (AGA) and the Nevada Gaming Control Board which represents the casino industry. Nevada GCB chairwoman Becky Harris testified that federal oversight isn't needed, because strict regulations are already in place.

"Sports betting will continue to grow and evolve," Harris said in her testimony to the committee. "We've been in this business for decades and not had any problems. What we have here is a regulatory process specifically to monitor what happens on both sides of the [betting] counter. This is all we do, and we're good at it."

Sara Slane, senior vice president of the AGA also testified, saying "The bottom line is, with such robust and rigorous regulatory oversight at both the state and federal levels, there is no need to overcomplicate or interfere with a system that is already working".

In October the NHL announced a sports betting partnership with MGM Resorts International. Commissioner Gary Bettman announced that any money the league receives from such deals will be allocated to the league's revenue pool. Bettman said that the NHL will share the fixed revenue from gaming partnerships on a 50/50 basis with the NHL Players Association

As of now, the player’s league has not taken a position over whether the players and the leagues should receive a royalty for the use of official league data from gaming operators.  Steve Fehr, a special counsel for the NHL player’s association, said that in collective bargaining, the players might ask for more.  At the ICE Sports Betting USA Conference in New York, Fehr said, "It's kind of hard to accept the notion that an industry should expand exponentially and generate all sorts of revenue basically on the backs of the players -- and the players should not receive anything out of that."

Player’s associations for all four major leagues say that they are aligned in their lobbying strategy when it comes to sports betting.

An additional question regards how sports betting and state-run lotteries may intersect. In West Virginia, for instance, the state lottery commission is the authority that is authorized to regulate the state’s sports betting operations. DC  has also passed legislation that could, if challenges to the plan are unsuccessful, bring sports gambling to the city. Kansas is another jurisdiction that is considering a sports betting bill that will authorize the Kansas State Lottery to operate legalized sports betting statewide.

Many observers say that such programs raise significant conflict of interest issues. They believe that gambling products should be regulated by independent gaming authorities. One official was quoted as saying "Having the lottery regulate sports betting is like having Netflix regulate Hulu.”

Many observers expect that as sports betting increases, the demand for live sports will increase as well. The American Gaming Association commissioned a study in 2018 with Nielsen Sports in which it was determined that the NFL could receive up to $2.33 billion in yearly revenue from sponsorship, advertising and added fan engagement that would come about as a result of sports betting.

This could influence prospective owners who might weigh the financial opportunities that gambling could bring when considering whether to purchase a team. Mike Keenan, managing director of Sports Practice Leader said "Clearly, there is value to be had there. You could argue whether it is double or some other percentage, but I think after the ruling there is now the ability for sports franchises to monetize that."

Mark Cuban, owner of the National Basketball Association (NBA)'s Dallas Mavericks,  was the first to note that the franchise value of every Top Four team in U.S. professional sports doubled after the SCOTUS ruling in May. The expected spike is already a reality -- the sale of the Portland Trail Blazers, Seattle Seahawks and a share of the Seattle Sounders FC, which were held by Paul Allen who died in October, may well eclipse $4 billion.

If Congress takes on the issue of sports betting, they have a lot of work to do.