Sports Betting in New Jersey - all the Updates 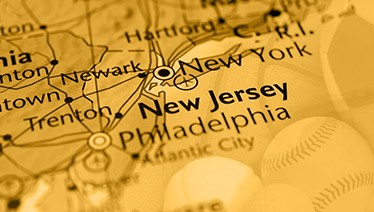 Bet.Works will be launching a New Jersey sports betting app in the coming weeks. The Bet.Works app will be operated by the online casino sports media company theScore.

Marc Brody was named as Senior Vice President of Business Development for Bet.Works. He will be responsible for overseeing company business development as he defines opportunities for the company’s growth across the US.

Brody, who was previously with SBTech, has been with the sportsbook and igaming technology industry for many years. Brody brings a strong track record to Bet.Works from SBTech where sport betting deals are being signed right and left.

Commenting on his new position, Brody said “Bet.Works is by far the most dynamic technology provider in the industry and its enterprise-grade sports betting platform is precisely what operators in the US have been seeking. (Bet.Works) is solely focused on the US market, which will provide our partners with a unique advantage over the current competition. I am thrilled to be a part of this exceptional team and look forward to driving the expansion of Bet.Works’ products and managed services.”

Bet.Works CEO released a statement about Brody’s new position. “We are delighted to have Marc join Bet.Works as he is highly regarded in the industry as a business development expert and has signed and managed numerous high-profile US sports betting technology contracts, including deals with the NBA and NHL.”

In preparation for their entry into the NJ sports betting market Bet.Works added Quinton Singleton, formerly of Scientific Games, as Chief Operating Officer and Dr. Laila Mintas, who came from Sportrader, as chairwoman of its advisory board.

Media company theScore will utilize Bet.Works for its mobile platform, starting in New Jersey at the Monmouth Park Racetrack. The company hopes to expand to other states as the additional states legalize online and mobile sports betting.

Gaming Innovation Group, which operates Hard Rock’s New Jersey online casino and expects to power the sportsbook app, says that the app is almost ready.  The land-based sportsbook, located in the Hard Rock Casino in Atlantic City, is also weeks away from launching. The Hard Rock Atlantic City sports betting developer is Gaming Innovation Group – that’s the same operator that will power HardRockCasino.com.

The Hard Rock app will allow NJ bettors to place bets on football, baseball, hockey, basketball, soccer and college sports. The app will be compatible with both Android and iOS devices.

Up until now, Gaming Innovation Group has focused on European iGaming markets but their NJ app, the 10th sportsbook app to be launched in the state, signals their interest in entering the American market. Hard Rock and GiG intent to expand their partnership in additional states in which Hard Rock land-based casinos operate as legal and regulated sports betting expands.

Until last May, DraftKings was centered solely around daily fantasy sports. Within less than a year the company has expanded into sports betting, particularly in New Jersey. It has also been integrating with casino-style games and is now expanding even further.

As a run-up to Super Bowl LIII, DFS unveiled Big Game Squares, a free-to-play contest that implements a popular office pool-style contest for its users and boasts prizes that can reach up to $50,000.

In essence, Squares looks like bingo. A virtual card gets split up into individual boxes. Each box corresponds with a row and a column that mark a specific score at the end of each quarter of the Superbowl game.

For example, the left column’s figures are associated with the New England Patriots while the top row’s numbers are dedicated to the Los Angeles Rams. Single-digit numbers 0-9 are randomly placed in the left column and the top row.

At the end of the quarter, users compare their card to the game’s score. The boxes’ associated individual numbers must match the final digit of each team’s score. For instance, if the Patriots lead the Rams 14-10 at the half, and one of your boxes lines up with “New England 4, Las Angeles 0,” you win

All DraftKings Sportsbook users, including those in New Jersey and outside of New Jersey, are welcome to enjoy the free-to-play Big Game Squares. However, you won’t be able to place real-money wagers unless you’re in New Jersey. To play, click on the contest within the sportsbook’s app. You’ll be taken to a separate landing page where you can select your Super Bowl squares.

The chosen square will serve as your selected square for all four quarters. Users will be presented with a blank board. Then, DraftKings will reveal the random placement of numbers when the Super Bowl starts.

Multiple users can select the same square for each quarter. The same cash prizes will go to each player.  If the final digit of each team’s score matches your square, you will win a cash prize.

New Jersey is looking into options to fight the recent Department of Justice Wire Act opinion reversal. Former state representative Ray Lesniak is calling for the state legislature to file a declaratory judgment action against the recent Wire Act opinion in the U.S. District Court with the goal of protecting and preserving “the significant benefits accruing to the State of New Jersey and our residents from internet gaming.”

Lesniak is also calling for New Jersey officials to seek assurance from the DOJ that mobile sports betting falls under the safe harbor provision of UIGEA. Observers note that New Jersey’s actions might provide insight into how states that have legislated online gaming may approach a Wire Act battle.

Lesniak is now retired but he led the charge for New Jersey to legalize online gambling and sports betting while he was still in the State Legislature. Lesniak notes that the DoJ opinion, if it stands, could significantly impact the state’s new gambling opportunities. Lesniak, an attorney, says that the legislature has the authority to file a declaratory judgment because, if it stands, the opinion will “nullify its internet gaming legislation.”

The NJ legislature authorized internet gambling in 2013 and sports betting in 2018. Once the Supreme Court gave states the authority to legislate sports betting in May 2018, NJ implemented the laws and reversed the downward spiral that the NJ casinos had been experiencing.

Since the new betting laws have gone into effect NJ has seen $1 billion in new revenue. In addition, two casinos that had closed were able to reopen, hundreds of millions of dollars have been collected in tax revenues by the state, the NJ horse racing industry is revitalized and thousands of new jobs have been created.

The newest DoJ opinion reverses a 2011 memo that stated that the Wire Act’s scope was limited to sports betting. Lesniak says that the new opinion is incorrect because it fails to heed legislative intent. He commented “How could the 2019 opinion be ‘based upon the plain language of the statute’ when the DOJ came to the opposite opinion in 2011? By reversing its own opinion, the DOJ admits the language is not plain and requires an analysis of the legislative history of the Wire Act, which would demonstrate that the Wire Act targeted only sports events or contests to assist the prosecution of organized crime run operations taking bets on sports events and horse racing.”