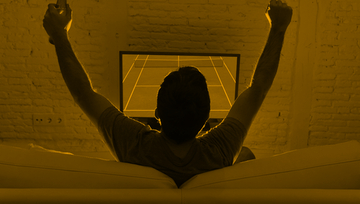 For the 10th straight week, WV sportsbooks earned a profit –nine of them reported six figure income. Overall betting handle in the state set new highs in each of the last three weeks.

The online sportsbooks are doing better two. The state’s two casinos, the Greenbriar and Hollywood Casino, opened their own mobile sportsbooks that made more money in three weeks than they realized during the two months that they used the BetLucky app. That app was forced to close and sports betting stagnated until FanDuel and DraftKings opened their apps in August.

In the months leading up to the launch of the FanDuel and DraftKings betting apps, state officials were worried about the slow showing of sports betting in West Virginia. Sports betting was legalized in West Virginia in late 2018. Lawmakers made the decision to allow sports betting – including online betting – based on predictions that showed that, by allowing people to bet on games, more than $5 million in tax revenue could be brought into the state in the first year alone.

Still, up until this summer, the state fell way short of those projections. The Hollywood Casino, located at Charles Town Races, saw only about $1 in new revenue during its first year and the other casino sites lagged behind.

Part of the problem could be attributed to a legal dispute between a technology provider and a gaming operator. The dispute caused the two sports betting casinos to close their BetLucky sports betting operations. In addition, the Wheeling Island Casino and the Mardi Gras Casino both shuttered their retail sports betting locations as well as their online platforms, only a few months after their launch.

Now that DraftKings and FanDuel have opened sport betting apps in the state, there seems to be no stopping the momentum building around sports betting in the state. Sportsbooks are busier than ever and there’s no indication that they will slow down any time soon, especially not, the “busy season” for sports betting with NFL and college football at its peak. The sports betting industry in West Virginia is presently in full swing.

West Virginia officials are encouraged by the last 10 weeks’ figures.  Some highlights include:

In its first week, online betting accounted for only about 4% of the revenue stream but in the last 4 weeks, it’s grown to 54%. Most observers believe that online betting has a long way to go before it peaks. They look to New Jersey sports betting market which now earns about 80% of its revenue through its online sports books.

Mountaineer Sportsbook is proving that there’s also a place for retail sportsbooks in the sports betting market.  Thus far, Mountaineer has been able to maintain a successful increase in business, even without a mobile app. The casino’s brick-and-mortar sportsbook has nearly been on par with the production of The Greenbrier’s FanDuel Sportsbook.

Mountaineer is banking on the importance of on-site gambling events which, they say, are still highly in demand among the gaming public. Mountaineer might change its mode of operation in the future to include a mobile app but for now, they are comfortable with their operation.

Football season is good for state tax revenue. $67,000 was collected during the first week that WV online sports betting apps were available. That seems paltry but indications are that that’s just a drop in the bucket.  Casino advisors note that, along with the fact that sports betting apps have only been available in the state for a few weeks, these apps haven’t had a lot of exposure to bettors yet.

Up until recently, wagerers in the state were unclear about the status of the new mobile apps.  They saw the BetLucky app close, problems with geolocation, launch issues and internal disputes. No one was giving them enough information to prepare them for the introduction of the new FanDuel and DraftKings apps – most state bettors didn’t even realize that completely new apps had been built for the state.

All that now seems set to change.

With the college football and NFL seasons underway, WV bettors have plenty on which to bet throughout the fall and winter. When the BetLucky app was operating in West Virginia last year, it brought in almost $123,000 when it reached peak football season handle during the week ending Jan. 19 2019. It’s handle was regularly in the $25,000 to $80,000 range but the handle rose again with $141,000, right before March Madness.

BetLucky shut down in early march and during the months that mobile was gone from WV, the state’s revenues from sports betting plummeted. Now that DraftKings and FanDuel are bringing their product to the market, they are offer WV bettors some new opportunities including

Now that mobile sports betting is legal, observers are watching to see if Hollywood casino will keep its place as the revenue and handle leader. Hollywood is located near Baltimore and Washington DC and has topped $100 million in total handle.

Most analysts think that that location will allow Hollywood to retain its position in the market. The DraftKings mobile wagering app offers rural dwellers more opportunities to participate in placing sports bets. Most observers say that Hollywood Casino won’t be significantly impacted when Washington D.C. gets its own sports betting infrastructure up and running. The FanDuel app will be a competitor for Hollywood but the casino should be able to maintain its market share.

In addition, Mardi Gras and Wheeling Island, both of which are managed by Delaware North, closed their own BetLucky apps and don’t seem inclined to re-open. The closures left a void in the market which mobile betting via the new DraftKing and FanDuel apps should alleviate.

Thanks to mobile betting, the WV sports betting scene is reviving. The end of the college football and NFL seasons should give operators and state officials a better idea of how the market will evolve in the future.