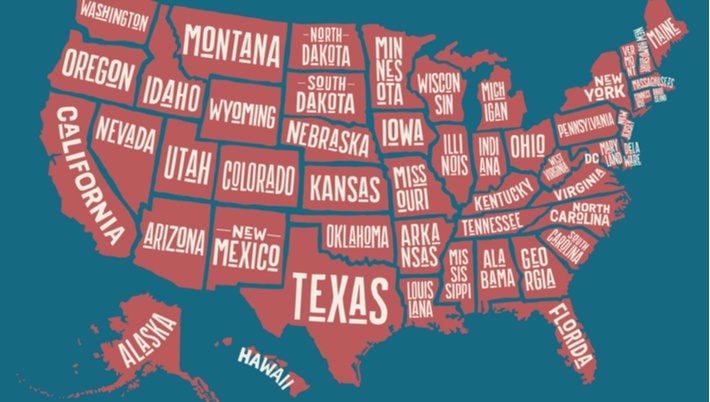 Since May 2018 when the United State Supreme Court ruled that states could legislate for sports betting in their own jurisdictions, almost half of the states have done so in one form or another. 23 states now have some kind of sports betting legislation with sports betting up and running in 19 states and the infrastructure being put into place to get online casino sports betting or daily fantasy sports going in the coming months in another 3 states.

The type of sports betting varies widely from state to state. Some states mandate that sports betting take place only under the auspices of a retail casino while in other states, both online casinos and on-site sportsbooks  operate. In at least one state, Tennessee, online-only sports betting is available to state residents.

Some states allow betting on fantasy sports in which contestants pay a fee and try to win money by determining which athletes will do best on that day’s games. Others have either banned fantasy sports or have left fantasy sports on shaky legal ground.

But now, states that were reticent about legislating for sports betting and/or DFS are rethinking their positions. There’s no denying that in states where sports gambling is legal, there is big money to be collected in taxes. Some states that are currently considering legislating sports betting/DFS or both for 2021 include:

Millions of Texans play fantasy sports but the legality of fantasy sports in Texas is unclear. Bob Latham of the Texas-based Jackson Walker law firm and 2018 DFW Sports Lawyer of the Year summed up the situation. “There’s no definitive answer to that and that’s the issue.”

In 2016 state lawmakers asked the office of the Texas Attorney General for a legal opinion. Ken Paxton, Texas Attorney General, issued a non-binding opinion that read that his office would consider participation “illegal gambling” because the contest results are partially based on chance.

The two largest fantasy sports companies, FanDuel and DraftKings, sued, saying that Paxton had misinterpreted the law. FanDuel pulled out of Texas operations but DraftKings never left and by 2018 FanDuel was again accepting players from Texas.

The issue, however, was never clarified and, says Latham to CBS21, it’s “murky….. “It comes down to what you think a daily fantasy sports league is. Where do you draw the line between skill and chance? Most lawyers could probably make the argument on both sides.”

Latham explained that daily fantasy sports did not exist when anti-gambling laws were passed in Texas. So there’s no definitive answer right now as to whether DFS is considered gambling, which is illegal in Texas, or not. If, however, the legislature clarifies the state’s stand on DFS, it would help everyone understand where they stand. To date, no one has been prosecuted for DFS but there’s still a legal risk.

Representative Joe Moody of El Paso wants to clarify the law.  “It only takes one prosecutor somewhere that thinks this is illegal betting,” Moody said to CBS21. “It’s better to be safe than sorry.” Two previous attempts to pass a bill were unsuccessful but 2021 might be DFS Texas fans’ lucky year.

Louisiana is considering allowing  DFS this year. Last month the Louisiana Gaming Control Board passed licensing requirements and regulations for fantasy sports operators based on referendums in 47 of Louisiana’s 64 parishes. The approval came in 2018 but it’s taken regulators and legislators will 2021 to come up with a regulations and a tax structure for the games.

The state’s gaming industry will be tasked with granting licenses based on a state police investigation of an operator’s application. Fantasy football leagues run by friends and other types of between-friends betting pools will not be affected. The legalization efforts will serve to open the door to DFS mobile phone apps offered by FanDuel, DraftKings and other large operators.

There are 2 bills making their way through the Arizona state legislature to legalize sports betting and DFS in Arizona. Bill sponsors are TJ Shope (R-Gila/Pinal Counties) and Jeff Weninger (R-Chandler). They hope that the bill will be approved before the end of the current legislative session. Once the bill is ready it will be sent to the governor’s office to be signed.

Casinos already operate in Arizona which has had a Tribal Gaming Compact since 1992 with Arizona’s Indian tribes. The Compact allows for poker, blackjack, slots and other forms of gambling but sports gambling has never been a part of the Compact. If the bills pass the tribes would be able to add sportsbooks to their casinos and other sportsbooks, including those operated by Arizona teams, would also be given the OK to operate inside their stadiums and within a quarter mile of their stadiums.  “Ten licenses to tribes and then ten licenses which are really going to the sporting teams, so think of the Arizona Cardinals the Arizona Diamondbacks the Coyotes,” Weninger said.  “Think about Westgate. Think about downtown Phoenix where the stadiums are. Think about retail that is right near there. They can also do that; then they can also contract with the online portals where you don’t necessarily have to leave your home to bet.”

Daily fantasy sports would become legal in Arizona if the bills pass. Weninger says that no one is sure what kind of tax revenue the state can expect from legalized sports betting/DFS but he’s optimistic. “I think we’re talking in the hundreds of millions.” Last year sports gambling revenue surpassed $1 billion in the US and bets are on a higher take in 2021. Nevada made $61.8 million in 2020 and Colorado, in its first year of legalized sports betting, brought in $18 million in gross revenue. .