Struggling with Gambling in an Unlikely Place 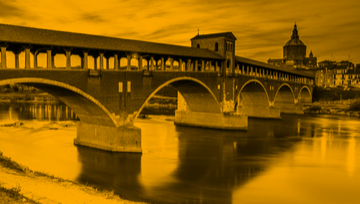 Pavia, in Northern Italy, was once known as “Oxford on Ticino” but today a more accurate description would be “Vegas on Ticino.” Pavia’s history goes back over 2000 years and includes the establishment of one of Italy’s most prestigious universities. But in recent years, residents have been turning to slot machines - real slots machines scattered all over the city and maybe also taking advantage of the Grande Vegas no deposit bonus codes - as the city’s main mechanical goods industry declines. And that’s brought big troubles to the city.

Now a unique coalition of activists is working to turn the city around, one slot machine at a time. And anti-gambling activists in other locales are watching carefully to see if they can replicate the Pavia activists’ success.

Pavia was an important military site in pre-Roman times. The army camp evolved into Pavia, the leading town of the Po Valley. It became an important center of trade during the Byzantine era, though always at the crosshairs of invaders and defenders. A vast palace complex was built along with an amphitheater and bath complex.

Several of the most beautiful Italian churches were built in Pavia, even as the city was being passed from one ruler to the next during the early years of the first millennium. One of the most famous churches is the San Pietro in Ciel d’Oro, a towering edifice which is still in use today.

During the medieval era Pavia became an intellectual and artistic centre. The University of Pavia was built in 1361 and students from around Italy and from other countries came there to study law. Over the years the city was governed by a multiple countries and governments until it became part of the unified country of Italy in 1860.

As manufacturing industries established factories in Pavia, a good portion of the residents’ income began to derive from manufacturing. However, by the ‘70s, that source of employment began to dry up. Many people left the town. The decline in population, coupled with the high unemployment rate and the lack of opportunities caused residents to turn their attention to a new industry – gambling. By the early 21st century the predominance of slot machines in the city had given the city the name “Vegas of Italy’s North”.

There was a good deal of concern about the prevalence of slot machines in Pavia but by 2013, anti-gambling activists, along with city politicians and community leaders, became alarmed. They noted that there was a slot machine for every 104 residents. The city wasn’t drawing outsiders to play games – all of the slot machines were kept busy by locals.

SenzaSlot (‘without slot machines’) is a group of anti-gambling activists who want to see the slot machines leave the city. Simone Feder, one of the leaders, explains that the pursuit is enveloping the lives of old and young people alike, in particular, people who can ill-afford to lose the money that they’re throwing into the machines. Therapists from SenzaSlot have been trying to see as many people as possible for almost a decade and they feel that their efforts are finally bearing fruit.

Activists from SenzaSlot say that there are a number of factors that have made the population of Pavia vulnerable to the lure of the slots. Giulia Cavaliere, an editor and writer who has lived in Pavia all her life, explains. “On a cultural level, there’s not much to do. It’s a wealthy city but the mentality here is rather closed. There’s just one movie theatre. The university is the only thing that is keeping the city alive, ensuring a constant flow of young people.”

Others blame the city’s problems on the loss of much of the mechanical good industry that took away the main source of employment and almost a 10th of the population. Today Milan is the industrial powerhouse in the area and Pavia’s main employers are the university and the hospital.

All of these factors came together to make resident of Pavia particularly susceptible to gambling addiction. There are no government restrictions on gaming machines in Italy and there was nothing to stop them from spreading through the city’s cafes and bars to meet the growing demands. “The city filled with slots and video poker machines,” recalls Ludovica Cassetta, a SenzaSlot activist. “It took a few years, but it was a constant process. We reached the point where bars looked like they were all about gambling, as if regular customers didn’t matter any more.”

By 2013 there were 637 slot machines in Pravia. The city had the highest per capita spending on gambling in Italy, €1,600 a year. To take action, SenzaSlot;s first step involved identifying the few cafes and bars in the city that did not have slot machines. They focused on encouraging people to patronize those venues by putting a window sticker, to that effect, in the windows of those establishments. They also began to run events to inform residents about the dangers of gambling. In particular, SenzaSlot targeted schoolchildren in their educational campaign to try to prevent the youngsters from getting started in gambling.

Next, the group began to offer legal support to the owners of pubs and cafes who wanted to remove the slot machines from their premises. Since the cafes and pubs don’t directly operate the machines, but only receive a share of the revenues, the owners of these venues needed to negotiate with the companies that own and manage the slots

The companies make it easy to install a new slot machine. However, removing one involves a penalty for breaking the contract – penalties go as high as €8000 per machine. The loss of a machine is also a significant loss for the bar or café which can lose between €500 to €750 a month per machine.

Matteo Tacchinardi, who owns the Bar Italia, explains the dilemma that he has – he doesn’t really want the machines in his bar but can’t afford the penalty to get rid of them. “I would have to pay €8,000 for every machine, and it’s too much for me,” he says.

The SenzaSlot movement is making inroads. They have gained the trust and the support of local authorities, who are dismayed at the social cost that the slot machines are having on their city. The Pavia city council has limited the hours that the machines can operate and are encouraging SenzaSlot in their efforts to get the machines out of the city. The city council has introduced a regulation that forbids slot machines from operating within 500 meters of a church, school or retirement community.

Former Pavia mayor Massimo Depaoli said  “Unfortunately, we couldn’t touch the existing slot machines because we have to wait until the end of the contract. But Pavia is not a very large city, so it is hard to find places that don’t fall in the restricted areas.”  The municipality is also offering a carrot to those cafes and bars that don’t have slot machines by permitting them to stay open for longer on public holidays. The city has also barred slot machines from any city-owned property.

SenzaSlot is slowing impacting the slots scene in Pavia. The number of slot machines in Pavia is falling and per capita spend is down 25%. The movement, though, has a lot of work ahead. Activist Ludovica  Cassetta says “True, our city is trying to limit slots but the fact is there are plenty of towns nearby that don’t have any anti-slot regulations. People can just go there to gamble.”