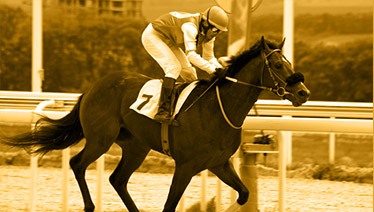 Winx has captured the hearts of horse racing fans around the world who are leaving their online games and gaming devices to watch the thundering mare pull off win after win. Winx is breaking records left and right as she puts Australian horse racing on the map.

Few mares have been able to stand up to the males the way that Winx is doing. The champion Australian thoroughbred racehorse has won 25 consecutive stakes races in the last 3 years including 18 Group 1's at distances that range from 1300 meters to 2200 meters.

The Irish-bred champion mare is an Australian favorite. She tied the legendary Black Caviar when she won the $3.1 million Queen Elizabeth Stakes at Sydney's Randwick racecourse which was her 25th straight victory.

That was when she left the start gate last but quickly took the lead 200 meters from the finish line as she and Hugh Bowman, her jockey, maneuvered around the ten-horse field on the outside gracefully and easily.

Even Bowman was stunned. "I'm lost for words" he told reporters after Winx finished almost four lengths clear of Gailo Chop as she become the first mare to take first place in the Queen Elizabeth Stakes. "She's just an exceptional athlete, she creates so much attention, I'm just so elated, I'm so proud of her and I'm just so proud to be a part of it."

Winx has earned her owners prize money of close to $15 million. Co-owner Peter Tighe was beside himself after Winx's 25th consecutive win.  "This is the most amazing day…this is the best horse in the world, with the best jockey in the world and the best trainer in the world. It seemed the world was on our shoulders today. She just makes us prouder every time she goes around."

Winx's victory was her 25th consecutive win, her 18th Group 1 triumph, and her 29th win overall. She is often compared to Black Caviar, another Australian legend whose achieved 25 consecutive wins between 2008 and 2013 including 15 Group One victories. Black Caviar was a two-time Australian Horse of the Year who won almost $6.2 million in prize money during her career.

Australian media and racing fans alike are enthralled with the mare. The news media adores her and she dominates interest among horse fanciers and casual observers alike. Her 25th victory sparked a media frenzy and made the front pages of most newspapers.

Some of the headlines include the Sunday Sport's "Mighty mare Winx equals the great Black Caviar" and "InWinxable. The day a champion became an immortal," which headlined the Sunday Telegraph.

Winx has been compared to human sporting superstars Tiger Woods, Usain Bolt and Roger Federer. Bruce McAvaney, an Australian sports commentator, wrote that Winx should be rated alongside the legendary Phar Lap as the greatest racehorse in Australian turf history.

McAvanery wrote in the Australian Daily Telegraph that  "it is tricky...to compare them with the great sports people but with a thoroughbred it also relies on their mental strength and the ability to perform on the big stage. Winx has shown that time and time again. She has had to overcome extraordinary difficulties in her races at times. Obviously she has enormous ability, is beautifully trained and is well-ridden which I feel has been the absolute key to her."

Winx's achievementss are even more incredible given that she's a female in a male-dominated sport – over the course of racing history very few mares have been able to compete successfully against males over a long stretch. The legendary Phar Lap, to whom Winx has been compared, achieved 37 wins in 51 races including the 1930 Melcourne Cup. Phar Lap is remembered fondly by Australians for his rags to riches story and ability to inspire the country during the dark days of the Great Depression.

There are no plans to have Winx race outside of Australia this season.  British racing officials would like to bring the Australian mare to the UK but her co-owners Richard Treweeke, Peter Tighe and Debbie Kepitis decided that she would stay Down Under, at least this year.

Chris Waller, Winx's trainer, said that the owners had considered entering Winx in the Royal Ascot because it's "one of the greatest in the world and would provide Winx the opportunity to be showcased on a global stage." In the end, however, they decided that the long plane journey and change of seasons wouldn't be in the best interest of the mare.

Even without the Royal Ascot there are still plenty of records left to break. Winx is now just four wins away from tying with Hurricane Fly, the recently retired Irish hurdler who won the Champion Hurdle twice and achieved a world record 22 Group 1 victories. The next race will likely be the prestigious Cox Plate which will take place in Melbourne in October – it will be Winx's fourth appearance at that track.