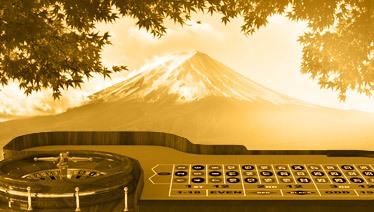 Now that casino gambling is set to be an irrevocable part of the Japanese landscape, the country is starting to come to grips with the nuts and bolts of how the industry will begin to integrate into Japan. Japan is seen as a lucrative market by international casino companies who believe that the three approved Integrated Resorts will succeed in pulling in foreign travelers as well as large numbers of locals. At this point the Japanese casinos will offer live casino entertainment but will not provide online casino gambling.

The Integrated Resort Implementation Bill, which was passed by the Japanese Parliament in July, brings with it the promise of large numbers of new jobs in the resorts as well as for the surrounding tourist infrastructure.

Yokohama is being eyed for IR development by multiple casino companies including eight groups from outside of Japan and four Japanese enterprises. Interest is high among Las Vegas’s biggest gambling houses with Caesars Entertainment Corp, MGM Resorts International, Melco Resorts and Entertainment and Wynn Resorts vying to receive the coveted license if Yokohama bids to host one of the 3 casinos that the government has committed to license.

Yokohama city leaders, however, are aware that the majority of the city residents aren’t happy about the possibility that their city might become home to one of the new Integrated Resorts. 94% of city residents responded to a recent survey that they had a “negative” view of having a casino set up in their city.

The Yokohama municipal government is studying the results of that survey but in the meantime, interested casino operators are submitting relative documents so that, in the event that they do decide to move ahead, the choice of operator to receive the license will have already been made.

Japan’s prime minister Shinzo Abe has been pushing to have the Integrated Resorts Implementation bill enacted for much of his term. He did so even though he was aware that the country was divided on support for such an initiative and that it might impact on his bid for re-election. Abe’s popularity did drop this summer after the IR bill was passed but he was re-elected in September and hopes to be in office when the first resorts open in 2025.

Abe will have the satisfaction of drafting guidelines for the resorts with the Ministry of Land, Infrastructure, Transport and Tourism and of overseeing the creation of a casino administration committee. The processes are expected to take a considerable amount of time due to the Japanese government’s lack of experience in this field.

In addition to Tokyo, Osaka and Yokohama, over 3 dozen municipalities in Japan have expressed interest in hosting an Integrated Resort but one of them, Okinawa, will probably not pursue the option. The new Okinawa governor has made it clear that he will not support a casino in the city during his administration.

Denny Tamaki won the recent election, running on a campaign that featured an anti-gambling platform. Tamaki ran against Atsushi Sakima who represented the Liberal Democrats. It was the LDs who succeeded in passing the Integrated Resorts Implementation Bill through Japanese Parliament in July. Sakima supported the party in its bid to bring casino gambling to Japan but Okinawa voters did not and denied him the post of mayor, largely because of his pro-casino stance.

It’s believed that one possible reason for Tamaki’s opposition to the casinos in Okinawa involves the casino owners, most of whom are American. Tamaki was born to a Japanese mother and an American Marine father – a father who he never knew. Observers speculate that that’s the core of the animosity that he feels towards U.S. military bases and gambling enterprises.

Tamaki is a former assemblyman on Okinawa, as well as a former member of Japan’s Lower House. He ran on a platform of economic revitalization projects for the district that include convention facilities and luxury cruises but will not consider anything related to gambling as an economic benefit.

According to the newly-passed Japanese Integrated Resort Implementation Bill, three licenses will be given, during the first phase of casino development in Japan, for operators to build integrated resorts in the country. Over 40 operators are at some stage of the process of applying for one of those three licenses. One of those is Tiger Resort leisure and Entertainment which has established an office in Japan in an effort to further their hopes to built one of those 3 IRs.

Tiger Resort Leisure and Entertainment Incorporated is a subsidy of the Universal Entertainment Corporation. It joins Hard Rock International, MGM Resorts International and Genting Singapore in setting up an office in Japan to establish better contacts with the Japanese government and advance their plans for a Japanese presence.

Tiger is headquartered in Hong Kong. It ss the parent company that operates the Okada Manila IR in the Philippines.  According to Universal, the Japanese office’s role will be to ‘study the potential of a casino resort business in Japan.’ The aim of the study will involve Tiger to  become “a future business contact’ with determined ‘customer solicitation and marketing activities.’

The language of the Integrated Resort Implementation Bill requires that each potential operator team up with a local partner in order to compete for one of the 3 available licenses. The Japanese market is estimated to be worth up to $20 million/year, making it a lucrative investment. In addition to the licensing fees operators will be faced with a 30% tax rate on gross gaming revenues.

Japanese nationals and residents will be required to pay a $53 individual entry fee to enter the casino – another source of income for the government.

This July Japanese lawmakers enacted controversial legislation legalizing gambling resorts. Opposition was stiff and even included the introduction of a no-confidence motion against the cabinet of Prime Minister Shinzo Abe.

The law legislates for licenses to be given for the development of three "integrated resorts" immediately with the option to consider additional licenses in another seven years. The resorts will offer casinos along with entertainment, hotels and conference facilities. Abe’s Liberal Democrats believe that these resorts will attract foreign investment and boost overseas tourism to invigorate the economy.

Casino gambling will be available at these integrated resorts. The government will collect a 30% gaming tax – the tax will be divided between the central and local governments. According to the legislation, the gaming area is to be limited to 3% of total resort floor space. International visitors will be eligible to enter the casino floor for free while Japanese residents will be required to pay approximately $50 per visit. Visits for Japanese citizens will be limited to three visits a week and 10 per month.

Japan is an important addition to the casino industry. Advisors forecast that Japanese casinos could potentially draw 15 million visitors a year and reach $15.8 billion once the three resorts open.