The Future of Sports Betting in New York 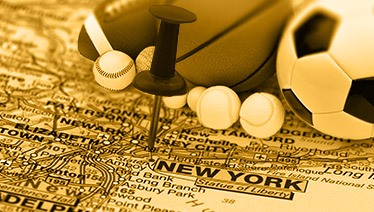 New York Assemblyman Gary Pretlow is planning to go ahead with a new bill that would authorize retail sports betting at New York racetracks. The bill also provides for the introduction of online casino mobile sports betting.

Pretlow said that he will pursue the passage of the bill even though Governor Andrew Cuomo is expected to veto the legislation when it gets to his desk. Cuomo is wary of signing such a bill because he believes that allowing sports betting anywhere outside existing casino sites – including tribal casinos – would require an amendment to the state constitution.

Pretlow disagrees. “It’s separate branches of government,” Pretlow said. “We do our thing, they do their thing, and we hope to come to a meeting of the minds at some point in time. He would more than likely veto it, but the only way we’re going to find out is to do it.

Pretlow is optimistic that the Assembly can avoid a confrontation with the governor. “Maybe he won’t veto it. Maybe we can override his veto. A lot of things can happen. But if we don’t try something, it’s never going to happen.”

Pretlow said that Cuomo’s statements in his State of the State address, made last week, were confusing. Cuomo said We invested in upstate casinos. Let’s authorize sports betting in the upstate casinos. It’s here, it’s a reality, and it will help generate activity in those casinos.” According to Pretlow, Cuomo does want to introduce the mobile betting and sports betting options to New York but is caught up with the question of whether such action can be taken without a constitutional amendment.

Regarding Cuomo's comments, Pretlow said “That’s not really what I was expecting. It sounded like he said he wanted to authorize the casinos, but they’ve already been authorized. What we’re waiting for is the Gaming Commission to come out with regulations, which so far they have not done.”

Many observers read Cuomo’s comments as an indication that he actually expects that the New York Gaming Commission to develop regulations so that the four upstate commercial casinos can begin to offer sports betting this year. According to Pretlow, now that the existing casinos can offer sports betting, a way must be found to expand that option so gamers who aren’t standing in one of the state’s four existing upstate casinos will also be able to place wagers.

Cuomo believes that to introduce sports betting and mobile betting to the state, a constitutional amendment would be required.  The state already has four commercial casinos in upstate New York which were authorized in 2013. Cuomo says that, now, in order to expand beyond those original 4 casinos, a constitutional amendment would need to be introduced.

The original casino legislation from 2013 included language that permits future casinos to offer sports betting if such a change was authorized on a federal level. The language states, specifically, that sports betting is legal in the casinos, but nowhere else. Now the question confronting lawmakers is, if the server that is taking the bet is located within the casino is that enough to satisfy this constitutional requirement? Some critics are saying that the person placing the bet needs to be in the casino which would preclude casinos taking online bets.

According to Pretlow, if the server is located within the casino property, that should be enough to satisfy the law. Pretlow says that he will produce supporting precedent. “Some people are saying it needs a constitutional amendment, but I don’t agree with that,” Pretlow said. “I take the stance that we just do this and let the courts sort it out.”

Cuomo might be reluctant to sign Pretlow’s bill because the daily fantasy sports bill that he signed last year was ruled as unconstitutional by the New York Supreme Court. Cuomo sees that as an indication that sports betting and mobile sports betting laws would also not stand the test of constitutionality.

Pretlow is frustrated by the stalemate. “Without a new bill to expand on existing provisions, the people of New York City will continue to go into New Jersey to place their sports bets,” Pretlow said.

Some people are asking why Pretlow doesn’t push for a constitutional amendment, which will remove all question about sports betting legality in New York.  Pretlow hasn’t ruled out such an initiative but he is reluctant to go that route because getting a constitutional amendment passed is a lengthy process. At the earliest, the legislature could get it on the ballot in November 2021 and Pretlow and other sports betting advocates don’t want to wait that long. They have been watching sports betting revenues from New York head into New Jersey’s coffers as New York gamblers enjoy the NJ sports betting opportunities and they want to see those revenues stay in NY.

Pretlow has admitted that that might have been the right move last year. If he had pushed for the constitutional amendment to be placed on the 2018 ballot, the legislature could have done so in time to have the issue appear on the November ballot. But Pretlow didn’t want to go that route because, by pushing for a constitutional amendment, he would have compromised his position that an amendment isn’t needed at all.

“I don’t want to introduce an amendment this year because, by doing so, I would be weakening my contention that the server being at the casino means the person doesn’t need to be present at the casino,” Pretlow said. “If it does need a constitutional amendment, there’s nothing stopping us from doing that, but it’s an uphill battle and it will take until 2021.”

The two legislators may have powerful allies in the form of the sports leagues. The proposed bills include an integrity fee of 0.25 percent of the handle for bets to be dedicated to the corresponding sporting league.

Pretlow is turning to the leagues for support. If the leagues want to see that royalty, Pretlow says, they will need to put their powerful lobbying groups behind the bill and convince Cuomo that there’s no need for a constitutional amendment to bring sports betting to the state.