The Growing Sophistication of Casino Security 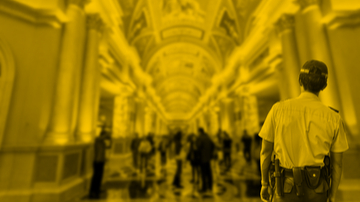 As scammers become more technologically-adept and sophisticated, Vegas casino venues invest massive funds and efforts to stay one step ahead of the cheats. Each game has its own soft spot but the most frequently targeted game is the slot machine. Slots are viewed as an easy mark and that’s where casinos focus most of their security efforts but casino security must cover the entire casino venue.

The story of Tommy Carmichael illustrates how difficult it is for the casinos to anticipate the imaginative efforts of a dedicated scammer. Carmichael developed a metallic device that could trigger a jackpot mechanism on a slot machine. He “won” many jackpots in 1980 but the casinos finally discovered his scam and updated their slot machine technology.

Carmichael was able to circumvent the new security and continued to “win” jackpots on the then-mechanical machines until he was arrested. While he was incarcerated, casinos moved to electronic machines but once Carmichael was released he was again able to figure out how to dodge new types of machines via a device called “the wand.” The Wand could trigger a jackpot on a slot by shining a light into the machine.

Carmichael sold his new device to other casino cheats who had varying degrees of success with the instrument. Casino security finally caught on and put Carmichael out of business permanently. But the story provides a glimpse into the lengths that scammers will go to get money through nefarious means at a casino.

The fight between the casinos and those prepared to perpetrate fraud is endless. Today, most of the tools of the casinos’ trade in the war against scammers involve technology which includes

Today, the majority of casino cheats are caught by surveillance cameras. The surveillance starts even before a person enters the casino through license plate recognition cameras that identify visitors who have a history of scamming.

Once inside surveillance cameras use facial recognition technology to scan the gaming floor and identify suspicious individuals, including 2 who might be working together.

Casinos share information with each other regarding suspected and known con artists in order to prevent scammers from moving from one casino to the next to carry out their scams.

Once a suspicious character has been identified, security will monitor them in the hopes of finding accomplices. Whenever possible, casinos like to put a whole team of cheats out of business to prevent part of the team from continuing on elsewhere.

RFID, or Radio-Frequency Identification Technology, involves electromagnetic fields that detect, identify and track tags attached to objects. Most people are familiar with RFID technology from seeing them as plastic “clips” that are attached to items (usually clothes) in a store. The tag is removed when a person purchases the item and if the person tries to leave the store with the item without paying, the tag will cause a buzzer to go off.

Casinos use RFID transmitters to prevent counterfeiting of slots chips. When a player cashes in his chips, each chip is passed over an RFID reader. If it fails to pass the test it’s assumed that the chips are counterfeit and the person trying to pass the chips can be arrested.

Anthony Carleo discovered RFID technology the hard way. After a heist, he made off with $1.5 million in casino chips but before he left the staff deactivated the RFID tracking on the chips. No other casino would accept the chips and Carleo was apprehended when he tried to sell the chips to an undercover police officer.

Probably one of the most relied-upon methods to secure a casino gaming table is about as low-tech as you can get – replacing decks of cards on a regular basis. Dealers replace cards constantly to avoid edge sorting which involves players spotting little defects in the cards and then using that knowledge to identify the cards and gain an advantage in card games.

It seems hard to believe that someone could carry off a serious scam through edge sorting but that’s what happened at the Borgata Hotel Casino and Spa where a professional poker player named Phil Ivey teamed up with a dealer to identify cards with defects and use that knowledge to his advantage. The casino uncovered Ivey’s scam and sued him for $10.2 million.

It’s harder to cheat online than it is on-site but some fraudsters have attempted it. One method involves creating multiple accounts and taking advantage of new customer offers multiple times.

Some online players were successful in withdrawing money through the Welcome Bonus through multiple accounts though they never actually deposited any cash.

There are other ways to use the internet to cheat at an online casino. In 2011, a British computer hacker assumed the identity of two company employees, transferred chips that he obtained through this identity theft to his own account and laundered them to other online players through social media. He was caught when the police identified him through his social media profile.

Players are most vulnerable when playing at an online casino but there are some basic steps that will keep players safe when playing on the Internet. They include:

Look at any emails that purport to come from the casino carefully. Clicking on links in a fraudulent email is a great way to lose control of your computer and allow an outsider to access your accounts and your private information. The best system is to simply read the emails that come into your inbox within your casino account.

It’s important to use a reputable provider, one with a certificate that attests to the fact that the site is licensed and regulated. This means that, in the case of a dispute, an arbitration process will be put into place. In addition, such a site will use SSL encryption software to protect banking information and personal data. A

As long as there are people who believe that they can get something for nothing, cheaters will be trying to evade even the most stringent security protocols to run scams. But today’s casino security seems to be up to the challenge.